Microreview: A Coin for the Ferryman by Megan Edwards 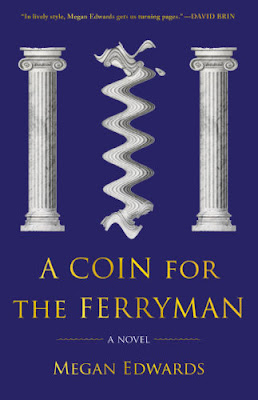 Man, time travel is going to be a headache for archaeologists.

Cassandra Fleury, casino waitress and amateur classicist, stumbles upon the job offer of her life when a friend of a friend of a friend is in urgent need of a new hire for a top secret science project. Required qualifications: a pretty face and fluent Latin. Cover story: helping date relics from antiquity. The actual mission: teleporting Julius Caesar from the instant just before his death, and interviewing him to collect fresh data on the less known areas of his life and his time.

Author Megan Edwards has previously published a memoir, a romance novel, and two murder mystery thrillers. A Coin for the Ferryman is her first dip into science fiction, and it provides exactly the kind of cross-fertilization that the genre needs every once in a while. This is a fun time travel adventure, but also a profoundly empathetic tale of responsibility, a humanist look at the tragic vagaries of cause and effect, and a sharp analysis of the ethical dilemmas of anthropological research.

Ideally, when you design an experiment, you take care to control all the variables. You strive to keep your subject within clearly defined parameters so you can gather the data you came for. But such degree of control is iffy when you're studying human beings. There have been decades of discussion among anthropologists about the proper methodological design that must be used to preserve at all times the due respect for the dignity of the subjects under research. In the case of A Coin for the Ferryman, the scientists ought to have known that they had no hope of maintaining control of their experiment when their experiment happened to be a man trained to command legions.

Moreover, the instant you invent time travel, you become an accomplice to all the crimes of history. The choice to not intervene in every known murder that has ever happened is morally equivalent to the choice to contribute to their occurrence. But so many threads of causality lead to the present, so many tiny changes sustain this moment that an equally strong case can be made for the need to leave the past intact. Both sides of this discussion are explored in the novel, and at no moment does it pretend that it's easy. To preserve history, the scientists have to return Caesar to the Ides of March. Literally billions of human fates hinge on keeping that moment the way it happened. But to knowingly send him to his death is akin to joining the mob of his stabbers.

As the days pass, and Caesar learns more about our world, the goals of the experiment become increasingly harder to stick to. However, the complications that start adding up and threaten to break the story never slip out of the author's grasp. Her experience with crime fiction comes in handy in the meticulous way the pieces of the plot are arranged: even when an earlier scene that is set later in time has already explained a key event, the moment of the reveal still lands with a punch. Lines of dialogue, physical objects, places on the map, moments in history: every detail fits in place with clockwork precision. Part of the pleasure of reading A Coin for the Ferryman lies in marveling at the care with which the whole is composed of seemingly incompatible parts. Every decent time travel mystery hides a twist that suddenly makes everything resolve into coherence, and this novel achieves the task with impeccable plot logic. It does not matter in the least that you can see it coming: it's the manner of execution that does the trick.

However, the author has too much understanding of human nature to fall into the temptation of making events seem inevitable. Choice is the key component of every turning point. History is not made of predictable, mechanical motions, but of the jumps in the human heart. That was true in Caesar's time as it is in ours. The novel is chock-full of flashbacks, which in most other genres might be wearisome, but in time travel are actually commonplace. The author uses these scenes to highlight the importance of tiny changes that lead to huge effects. In the past of every major character there was a moment that seemed inconsequential yet proved to leave an irreversible mark. The novel seems to be saying that, just as you cannot hope to control history, you cannot hope to control an individual destiny. That sentiment may sound shocking to modern sensibilities, but it's in line with the classical view of fate that prevailed in Caesar's time.

The mission to send Caesar back to his time is resolved in a way that Edwards narrates with extensive detail. A conventional action adventure might opt for a faster pace, but Edwards wants to direct your attention to the fragility of plans and the ease with which our best intentions can get derailed. Mistakes await at every moment of choice. However, this is not a fatalist story. It's trying to say something far more sophisticated than "science is hard" and "people are tricky." The mistakes made by the scientists stem from their unquestioned, culturally conditioned assumptions about Caesar's behavior, and Caesar makes the same kind of mistakes when trying to understand our world. In epistemology, this failure of communication is known as illusion of transparency, and the phenomenon that causes it is called inferential distance. Edwards isn't just replaying the fish-out-of-water trope; she's making a serious effort to illustrate why it happens, how it distorts the practice of the social sciences, and how fatally dangerous it is to believe you know more than you do.

Caesar himself is, of course, the high point of this book. I'm no expert on the classics, but I found this version of Caesar a solid one, and I'm sure those with more knowledge will find plenty to savor in the way Edwards has created a believable human being from the fragments that have survived over the centuries. Part of the joy of science fiction is to make the unfamiliar feel close. In this Edwards excels.

The plot of A Coin for the Ferryman is a dream come true for fans of Roman history, but it's much more. It's an effortlessly readable novel for fans of literary fiction, an erudite thought experiment for fans of anthropology, a pointed satire of office politics for fans of academia, and a welcome addition to the canon for fans of time travel.

Bonuses: +1 for making great use of the type of subplot juggling that writing crime thrillers trains you for, +1 for the skill with which even the clearly predictable plot points still feel like surprises when they arrive, +2 because science fiction books written by authors coming from other genres can easily make the mistake of trying too hard to prove their nerd credentials by spending dozens of pages on explaining the technical details of how the machine works, but this one wisely keeps the attention away from the science lecture and aimed straight at what the consequences of the science mean to the characters.

Penalties: −1 because the characters not connected to the time travel experiment suspend their disbelief about Caesar's presence in our time a bit too readily, −2 for rather excessive adoration heaped by everyone at Caesar's character.