Review: Until the Last of Me by Sylvain Neuvel 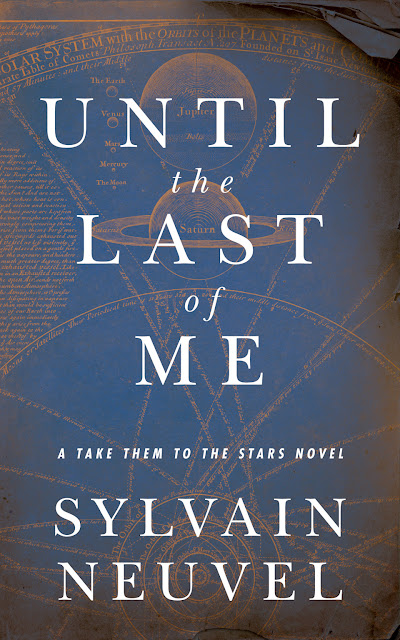 In the first novel of this series, A History of What Comes Next (which I reviewed for this blog last year), we learned that the progress of science on this planet has always been secretly guided by the Kibsu, a humanlike species of superstrong, supersmart aliens whose genetic line split at some point in antiquity, with the female line dedicated to developing mathematics and teaching it to humans, and the male line sworn to hunting down their female counterparts as punishment for some supposed treason no one remembers anymore. For centuries, these aliens have been spreading both knowledge and death as each lineage pursues their mission while hiding in plain sight among us. The title of the series is Take them to the stars, but in that first novel the full meaning is revealed as Take them to the stars before we come and kill them all.

The newly released continuation, Until the Last of Me, displays the hallmark signs of Middle Book Syndrome: the plot gets a bit repetitive in the early chapters, feels a bit directionless toward the middle, and is suddenly hijacked at the end by the need to put all the pieces in position for the upcoming final confrontation. Instead of the intricate web of goals that the characters had in the first book, here the daughters and the sons of the Kibsu are each obsessed with a single puzzle quest that makes the story feel smaller this time. The Kibsu women try to learn more about their past by researching the cryptic message engraved on a hunting bow that belonged to one of their earliest mothers, while the Kibsu men follow obscure archaeological clues to the location of a buried machine that might end their exile on Earth.

In a way, this narrowing of the focus was necessary. The timeline of the series has now reached the space age, the time when humans became finally capable of exploring the solar system without any more alien help. The author is aware of this shift in priorities, and lets it influence the character's inner monologue: now that humans can build their own rockets and calculate their own travels, what's the point of the Kibsu? So it makes sense for the narrative to now start swerving away from the cool equations and toward finally resolving the core mystery about these people's arrival on Earth and their original intentions.

However, this sequel does not have a gentle start. The author perhaps wished to "hit the ground running;" the problem is that this kind of story requires training wheels. Your familiarity with the previous novel and its revelations is very much taken for granted. In the chapters that follow the Kibsu women, you're expected to already understand why this single mother is keeping a low profile yet plotting interplanetary trajectories while her daughter is a natural-born hand-to-hand fighter; in the chapters about the Kibsu men, you're thrown head-first into an abusive family situation where creepy identical brothers struggle with monumental daddy issues.

Now that the story has revealed more about these aliens, one can attempt to infer thematic intentions. The first novel was, for the most part, a spy/survival/heist thriller. But this entry contains deeper psychological twists about the hunters and the hunted, and about the toil their legacy has left on them. For the first time in a hundred generations, both sides seem willing to put an end to their murderous game. For the first time, there will be a set of Kibsu descendants without the knowledge of their ancient mission, without the burden of guiding the humans to space.

I keep thinking back to a sentence near the ending, a brief line that hides volumes: "Despite the uncertainties about the sun, what everyone agreed on was that it was doomed to die and everyone with it, which, in Annie's mind, made understanding how it worked a moral imperative."

That is the foundation of this entire series. Doing science is not just an expensive pastime. It's not a prestige thing you do to impress people at parties. Doing science, especially in the painstaking, unglamorous way portrayed in these novels, is how you take care of civilization. In the individual journeys of the handful of unrecognized scientists that make up half of the Kibsu lineage, the author has condensed in speculative form the very real collective responsibility to learn and to grow. And in the obsessive persecution perpetrated by the other half of the Kibsu, one can discern the multiple historical forces that have been hostile to our development.

When the story picks up, the rules of the game will have changed. Humankind has made its giant leap into space. The mission of a hundred Kibsu daughters has been fulfilled. But the repercussions of the sons' mission will complicate everything in the next book.

Bonuses: +1 for meticulously crafted puzzles. They are the guiding throughline the whole book relies on, and they get the job done.

Penalties: −2 for the same reason as the earlier book: the characters change countries and assumed identities far too easily and too often to be believable without at least some explanation. Several times in the story, the protagonists on both sides of the chase give up their entire lives and start anew, but we don't learn what they do for a living or how they afford their frequent intercontinental hopping. They get away with murder, leave everything behind, and somehow start from scratch at a new address. This is the main point of pressure on the reader's suspension of disbelief, and by this point it's leaking water. It's like the author forgot that the pleasure of watching a spy thriller is not only in seeing how the ruse is executed, but also how it's planned.