A new dimension for a new generation. 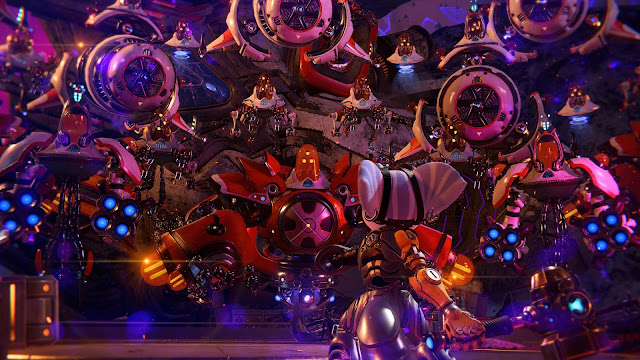 Armed with his trusted wrench and loaded to the teeth with crazy weaponry, Ratchet bursts onto the new generation of hardware in style. Hot on the heels of Insomniac Games’ recent release, Spider-Man: Miles Morales, the studio has put out yet another high-quality title in Ratchet and Clank: Rift Apart and this one is exclusive to current-gen hardware. Being the newest release in an almost two-decade-old franchise, Insomniac has achieved a delicate balance that brings new players into the fold and caters to longtime fans of the series. Marrying classic characters and gameplay elements with new faces and mechanics only possible on this generation of hardware makes Rift Apart feel fresh, yet familiar; a testament to Insomniac’s development prowess. 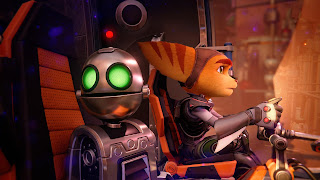 Insomniac’s meticulous level design in Rift Apart has near Pixar level quality that left me staring for moments on end, gawking at their graphical capabilities. The most impressive level was Blizar Prime. Once I jumped out of my ship, the vista before me was incredible: a spectrum of purples, light to dark, with destroyed pieces of planet scattered in the space around you, light reflecting off of any surface that would allow. The lighting effects and art style shone brightly and, in that instant, I realized that this was the best looking game with this style that I’d seen. And then it got better. With Rivet’s hammer, I smashed the Blizon Crystal before me and the entire level shifted to the same planet, but in a different dimension. What was once a ruined planet became whole, the level came to life. The somber purples of a destroyed Blizar Prime were replaced with a bright, vibrant planet. The transformation took place in less than a few seconds, a great example of the SSD’s speed. 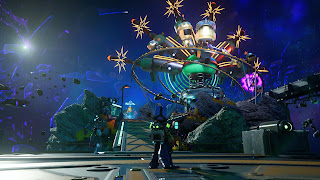 Throughout Rift Apart, Insomniac takes advantage of the SSD, whether it’s Blizon Crystals, instant level shifts in boss battles, or dimensional rifts. These uses of the hardware are seamlessly incorporated and allow for greater immersion due to a lack of load times. This use of the SSD makes me excited for a potential Spider-Man multiverse shifting mechanic that they could employ in future titles. But the SSD isn't the only hardware that Insomniac takes advantage of. The overall power of the PS5 is used to great effect. The ray-traced reflections on every available surface make Rift Apart mesmerizing at times. The quality of the lighting dynamics in real-time gameplay is dazzling.

Even with all these technical qualities firing on all cylinders, the game keeps a steady frame rate. Switching between all the whacky guns and shifting between planets and dimensions flows with ease, making the overall experience smooth and enjoyable. Though I did encounter a few bugs, none of them was game-breaking (I had to test the game’s limits). For instance, on Blizar Prime, I repeatedly smashed the Blizar Crystal to see if it would affect the game. Sometimes my ship would disappear, sometimes my quest prompt would disappear when I did this. It was a simple fix though; I had to exit and reload the game (which doesn't take very long at all). There was a moment where I died and lost the ability to progress in a level because my prompt wouldn't load. Though it was momentarily frustrating, it had the same fix. 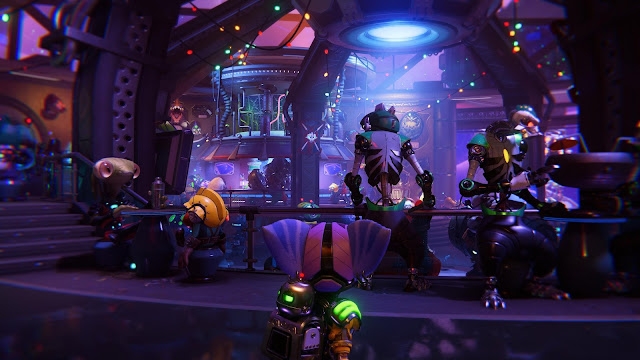 This wouldn't be a proper Ratchet review without discussing the weapons. There are a bunch of them (maybe too many?) and they're almost all great. Launching Mr. Fungi and listening to his silly commentary is chuckle provoking. The Topiary Sprinkler is a valuable tool that I employed in almost every battle. Having my enemies freeze in place and sprout grass all over allowed me to strategize with other weapons, or get in close for a more critical shot with my Pixelizer (which damages enemies and temporarily turns them into a pixelated version of themselves). The upgrade system is terrific, and one of the things I loved most about Ratchet and Clank: Tools of Destruction—my favorite game in the series. Each weapon can level up in two ways: through use and by spending in-game currency. Reaching level five with any weapon will transform its capability and make it even better. Using Raritanium can also tweak the weapon in many ways, minor and major. Seeing your weapons improve is one of the most enjoyable aspects of a Ratchet game, and Rift Apart is no slouch in this department. On subsequent play-throughs, you can even upgrade these weapons to their Omega version, making them even more powerful. 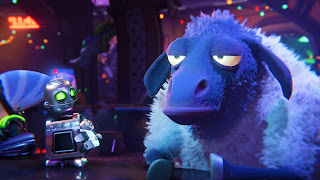 The characters who wield all these wacky weapons are well crafted. Rivet and KT-7461 add a great (and adorable) parallel to Ratchet and Clank in this multi-dimensional adventure. Rift Apart uses most of its time to focus on these two new characters, placing Ratchet in the backseat for a lot of the game. Rivet is affable, yet formidable, making the discovery of her backstory a treat. Though there were a few story beats in the game that felt rushed and a handful of touching moments that weren't given the appropriate spotlight, I felt like the game had solid pacing and an overall enjoyable story. Seeing parallels of many of the series’ staple characters was a joy (British Nefarious anyone?) and I look forward to seeing some of them again in future titles. 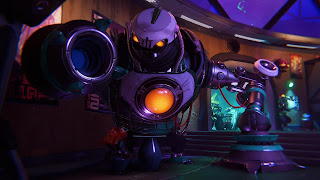 By assigning certain levels to Ratchet and others to Rivet, Insomniac allowed for a balanced focus for all characters. Though I felt Rivet had more attention, it was necessary to flesh out the character and I never felt overwhelmed by one or the other. In many games and television shows that alter between different character’s perspectives, I find myself drawn to one character’s storyline more than another, but this isn't the case in Rift Apart. And don’t worry, by ensuring both characters share the same bank account, any weapon you level up with either character carries over to the other. You won't have to upgrade anything multiple times.

Rift Apart is one of the best games in Insomniac’s long-running series. Though the game has a short runtime, giving some late-game weapons the short end of the stick (unless you do multiple runs), the content that is there is enjoyable and well crafted. All the unlocks, especially the Lombax lore, are enjoyable and not tedious to unlock. The extra outfits are great and all add increased performance—whether you have something equipped or not—and they’re all customizable, so you can rock out whichever colors you want while you beat bolts out of your enemies. 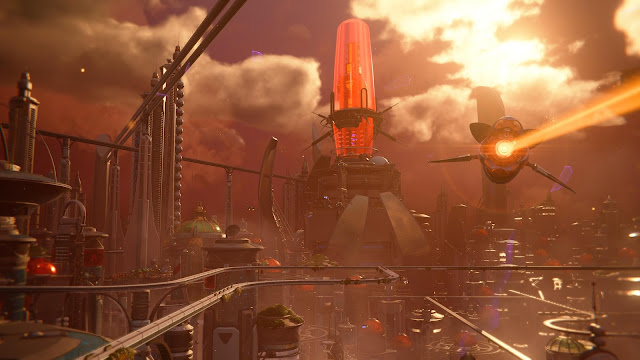 Though my time with Ratchet and Clank: Rift Apart was brief, the experience was a positive one. Insomniac has crafted yet another solid title for their portfolio that makes me eager to see what they have up their sleeve for their next release. If you’re a fan of the series, fun weaponry, or other games from this studio, you won’t want to miss this one.
The Math
Objective Assessment: 8/10
Bonus: +1 stunning pixar-like visuals. +1 for fun and creative weaponry.
Penalties: -1 for introducing some weapons late without much incentive for multiple playthroughs. -1 for some rushed story beats.
Nerd Coefficient: 8/10
Posted by: Joe DelFranco - Fiction writer and lover of most things video games. On most days you can find him writing at his favorite spot in the little state of Rhode Island.
Orignally posted at: https://josephdelfranco.wixsite.com/pforp/post/hades-review
Posted by Joedelfranco at 12:00:00 AM