An anthropologist and a queen's daughter team up to battle an impossible demon. 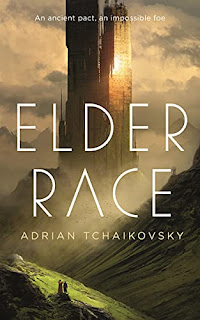 Lynesse has a problem. As the fourth daughter of a Queen, she’s not the heir, she’s not of high responsibility, even if she feels it herself.  When a threat to a nearby kingdom appears to involve demons, she knows what to do--to call upon Nyrgoth the local ancient sorcerer for help. Her family has a long ago pact with the sorcerer, and while getting to his ancient tower is difficult to reach, she is going to do it.

The problem? This is a colony world, there is no magic, no demons. Nyrgoth is actually Nyr, an anthropologist (second class!) who has been studying this world for a very long time, using periods of stasis to pass the decades, the centuries. He interfered a couple of generations before, dealing with a remnant of high technology gone wild and feral. But when Lynesse awakens him to deal with this own problem, Nyr has to battle not only a “demon” but his own also personal one.

Elder Race is a novella from Adrian Tchaikovsky.

The boundary space between science fiction and fantasy is something that the author has explored in a number of works. Most notably and recently, and also in novella format, The Expert System’s novellas are science fiction stories with the tropes and feel of fantasy. Here, though, in The Elder Race, we get a fantasy story that is based in a more realistic science fiction vein, in a potential future, on a future colony world. This is a very different novella in that, in the prior novella, the assumption is that colonists need to be utterly protected from the biosphere of a colony world (a la Kim Stanley Robinson’s Aurora). Here, the default assumption is softer, that humans could live in another world’s biosphere without utter disaster.

Voice and point of view really account for how this novella works as well as it does. The novella switches between two points of view, a first person point of view with Nyrgoth, aka Nyr Illim Tevich, and a third person point of view with Lynesse Fourth Daughter. Although the novella is devoted to Gene Wofle and his story “Trip, Trap”, it is Jack Vance, from the choice of the name of the heroine to the science fantasy elements blending together that I found parallels and hooks just as much.

In Lynesse we get that medieval, fantastic point of view, where Nyrgoth is a sorcerer, magic is real, and the infestation in the forest is, obviously, a demon. The novella is sparing in its details, and so the society we get is well described, but not in “phat fantasy” terms. This is a society clearly where the women are the heroines, where things are shaded and lined up that it is they who are the default for such things, rather than men. It’s not a matriarchy by any means, there are other male characters than Nyr (who is an exception, because Sorcerer), but it is the exact opposite of too many fantasy stories where it is assumed that men characters are the default heroes. By genderflipping it, Tchaikovsky shows the lazy default up for what it is.

On the other side of the equation, we have Nyr. Nyr has the scientific viewpoint, he’s studying this society, should not be getting involved (but he did make a long ago promise that Lynesse is calling on), and of course magic and demons don’t exist. Also, he carefully is trying to deal with some nasty brain depressive brain chemistry in the process. There is a definite sense of frustration if not outright futility in him and his work. He may well be, he realizes, the last of his civilization. Even as he files and sends off reports, there are no answers in return. It’s a lonely life, and that goes to his depressive brain chemistry, for certain. But the scientific viewpoint does provide a nice parallax in trying to figure out what is “really” going on.

This tension of switching from these points of view gives us a good entree into the world, and shows us things from both points of view. The author is clever in choosing when to break from one POV to the other, often leaving us to have to figure out and interpret for ourselves what something “really means” (this especially works when we see Lynesse interpreting Nyr’s actions and words. This sort of game really reaches its apotheosis when we get a “split screen” of Nyr explaining his and his civilization’s history to Lynesse and her companion, Esha.  We get Nyr’s own words, in his language, and we also get the translation of those words into terms and the language that Lynesse understands. It’s a masterful way for the author to show just how similarly, and how differently, too, these points of view can interpret history.

As far as the “demon” itself, the revelation of what it is, and how Nyrgoth and Lynesse must deal with it, is part of the point and the joy of the novella, and I will leave it for the reader to discover. The Gene Wolfe story “Trip, Trap” gives a clue...but Tchaikovsky takes his own tack, and his own approach, and it works quite well indeed. I think if I had to point to a fault, it is that the story is almost a little too condensed for its own good, there is plenty more room here to have expanded this story (not extend it, mind, the ending works rather well). Novellas can be tricky things, sometimes they are a short story that “just grew” and sometimes a novel cut down to size. This feels like it could have been a short novel, but I think at least a little more fleshing out of the world (which leaves a lot for the reader to piece together, maybe a bit too much) would have worked better. But I can see how too much in Nyr’s point of view might have not been a positive, and it is the balance between those two that makes the novella work.

Bonuses: +1 for good use of voice and point of view to tell a story from two very different perspectives, richly rewarding the reader.

+1 for exploring the boundaries of science fantasy interestingly and engagingly

Penalties: -1 The length is a bit frustrating, there is more that could have been written to flesh out the world, some things are *too* sketched in.