Microreview [book]: And Then I Woke Up by Malcolm Devlin

A perfect novella for our time. 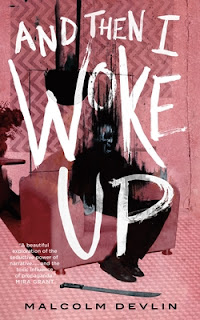 And Then I Woke Up is a terrific book that shows how facts are often unsatisfying and dull. They frequently offer nothing but emotional flatlines. Stories are where semblances of believability merge with engaging happenings. Those stories can be so appealing that people are willing to shun reality to either tie all the loose threads in their life in a meaningful bow, create exciting heights in their life, escape their confusing and inextricable ruts, or all of the above. And this story does it so, so well.

Stories can improve one’s emotional intelligence and expand their imagination. It can also be weaponized. It’s never more apparent than today, when a quick look at the comments section on a webpage is rife with conspiracy theories that often are counterintuitive to reality and one’s health. People stage insurrections and die from viruses because of unfounded stories posted online. It’s no coincidence that as our world is increasingly collapsing, people are jumping ship to get away from it. They create their own world, where everything is seemingly afloat, and those sinking are seen as unsavable sheep that are too far gone. The more pain in our world, the more people try to alleviate it, and nothing is more powerful than dismissing all the pain as an illusion and replacing it with an idea in which you’re enlightened and special.

Spence is a dishwasher enamored by a waiter named Macey. Meanwhile, many people’s susceptibility to believing what once were unbelievable is increasing. Spence and Macey get swept up in it, as Macey’s charisma and elocution convince Spence that a zombie apocalypse has started. Some people aren’t buying it, however. Deaths ensue from both his and the opposing side, leading Spence to eventually be hospitalized. What follows is a beautifully written, emotionally intelligent exploration of how and why we craft and absorb beliefs.

The three main characters – Spence, Macey, and Leila – are developed with aplomb. I really felt like I knew these characters inside and out. All their motivations made sense. All their changes of heart felt earned. The other characters were less developed but still felt crucial to the narrative. And the writing moved at a great pace, taking some breaks to philosophize which never came close to being boring or feeling like a tangent. This is a story that’s so engaging that those people susceptible to being overtaken by narratives would eat it up in a heartbeat.

As much as I would love to unwaveringly assert a certain narrative of what Devlin was aiming for in this story, that would be counterintuitive to this tale’s message. To me, it feels like it was inspired by how charismatic figures have wielded their strengths and used it against people susceptible to Qanon, antivaxxers, and other conspiracy groups. However, I can see another reader see what I see, and attribute this book to exploring psychosis, too. As someone with schizoaffective disorder who experienced psychosis before being properly medicated, let me be the first to say that Devlin nails the concept of delusions whether it be from a want to have their reality change, or from neurochemistry out of their control. I think the road to arriving at those delusions are different, but the destination is the same. There’s a simplicity to them that’s comforting where everything you see fits in perfectly with the next, because you are the creator of your world, rather than inhabiting the randomness of reality. Just like how an author writes a story.

Sometimes the best stories are those that are benign. Relaxation can be just as alluring as electrifying purpose. And Then I Woke Up isn’t just a perfectly crafted story, it’s a steppingstone to filter fact from fiction and to make those be on alert of the diversity of appealing lies. As a book reviewer, not many people see the value of stories as much as those of my ilk. And Then I Wake Up sees it even more clearly. It excises the monotony of reality and replaces it with something fresh and compelling. Stories go down like treats, and we should continue consuming them. We just have to make sure, from time to time, to eat our veggies.