'Turning Red' finds joy in the scary messiness of puberty

What do you do when you don't recognize your body anymore? 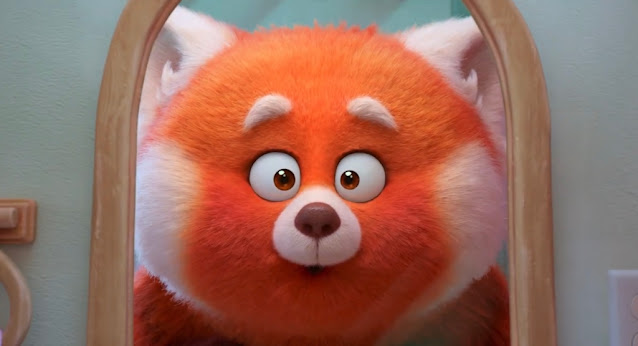 One day you wake up and find you've grown hair in weird places. Now you're smelly. You're also taller, and with your new proportions you're bumping into things all the time. You notice that certain feelings cause involuntary reactions in your body that you'd rather nobody would see. You're suddenly capable of things you didn't know you could do, but what if someone gets hurt? Will things go back to normal? Or is this supposed to be normal? What if your friends notice? What if your parents notice?

There's a primal terror to puberty, a volatile sense of strangeness and confusion and vulnerability. Just when you think you've got yourself figured out, your genes kick in and change all the rules.

Disney/Pixar's new animated movie Turning Red takes this metaphor of puberty as transformation and situates it in the no less stressful context of the immigrant experience during the rise of digital mass media. If being a teenager is hard, it's almost unbearably so when inherited traditions and expectations conflict with multicultural openness and pop culture sex symbols. When protagonist Meilin Lee learns that the women of her family have the power to transform into enormous red pandas, it feels like it couldn't have come at a worse time: she's busy enough pleasing her parents and excelling at school and daydreaming about boy bands without going all Katie Ka-Boom every time she gets emotional. So she panics, and tries to hide what's happening to her, and pretends to be in full command of her feelings—but her inner animal won't be tamed. There's no denying the call of nature.

American pop culture has usually cast a benevolent eye on teenage boys, embracing and celebrating their exploration of desire. Not so with girls: somehow, the mere notion of young female desire still befuddles a certain segment of the audience that refuses to make an attempt at empathy for half of the human species. That a movie about the female body dares to talk about menstruation should not be the cultural milestone that it is.

It's unfortunate that we can no longer discuss Turning Red without addressing how Sean O'Connell embarrassed himself all over the internet because this movie gave him cooties. There's not only the theme of womanhood: O'Connell failed to see how this movie advances a necessary conversation about Chinese parenting, particularly Chinese immigrant parenting, and it's a conversation in which we in the dominant Western culture need to step back. What this movie has to say about Chinese families is something only a Chinese artist is able to say, even though the emotions involved are ones we have all felt, and that's why it's invaluable that movies like this get to exist.

Leo Tolstoy said, "If you want to be universal, paint your own village." Meilin's experience inhabiting the culturally hybrid space of Toronto (a reflection of director Domee Shi's own experience) is central to the themes of Turning Red, because her heroic journey is about reconciling legacy and possibility, duty and independence, reputation and experimentation. To me, the most symbolically powerful moment in the movie is when Meilin's efforts to detransform in her bedroom shake the entire house and almost break a framed photograph in the living room. Her mother rushes to save the picture and places it back on the wall, and in that moment we get a brief glimpse of the photograph: it's a much younger Meilin, looking cute and inoffensive. That's the emotional core of the story: the commotions of adolescence threatening to break the image of the adorable child.

Meilin's victory lies in finding, as her father advises, room for all the sides of her identity. She's a member of a holy lineage, and also a teenager of the 2000s. She's Chinese, and also Canadian. She's sweet, and also wild. She doesn't have to split herself. She can be all she is.

Puberty is every bit as terrifying as it is exciting, and Turning Red is aware of that complexity. In Western culture, red is the color of danger. In Chinese culture, it's the color of celebration. Meilin's first step toward maturity is to acknowledge both.

Bonuses: +1 for a final kaiju fight that is a perfect representation of every mother-daughter fight.

Penalties: −1 for not devoting more time to exploring why Meilin's family repeated their choice to give up their wild side.