The Voter's Packet for the Hugo Awards has been released and made available to all members of WorldCon 76 and Nerds of a Feather has put together a compilation of what we feel represents the best and the breadth of our collective work published in 2017. While the purpose of the Voter's Packet is to help eligible voters make an informed decision when casting their ballots, we wanted to also make this available to all of our readers who may want to take a look back at what we did last year. As such, below is Vance's introduction to the Voter's Packet followed by the Table of Contents with links to each of the essays, reviews, and features we included in the packet.

If you'd like, you can also download the files we included in the Voter's Packet and take Nerds of a Feather on the go.

We hope you enjoy! 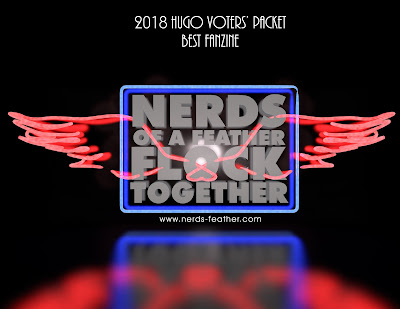 In 2012, after who knows how many backyard barbecues where we talked on and on about sci-fi and fantasy (and different styles of barbecue sauce), my neighbor asked if I’d like to start a nerd-themed blog with him. So The G had this idea and I jumped aboard, and it has been a joy to watch nerds of a feather, flock together grow ever since. Now, for the second year, we have been nominated for a Hugo Award, which is a staggering honor, and one that I never could have foreseen while just gabbing about Alfred Bester over cheeseburgers.

It’s easy for me to be proud of the site and the role we play, however humble, in the larger conversations about sci-fi, fantasy, horror, comics, film, video and board games, and fandom in general. It has opened the door to rewarding friendships and partnerships, such as with our newest editor, Joe Sherry. I am a legitimate fan of all of our writers, which makes even our disagreements rewarding. Being able to disagree and to be presented with opposing views is one of the great joys of being involved with this site, and it is, in my mind, a model for the kinds of interactions I like to have more broadly in fandom. As an example of that, in this packet we’ve pulled together a number of posts by different contributing writers in response to The Last Jedi, which was arguably the most divisive genre work of 2017. None of our team outright disliked the film, but there was certainly a range of opinion on the film overall, as well as many of its component parts. Taking these kinds of conversations from the backyard to the broader web community was one of the main reasons The G and I decided to create a collaborative fanzine in the first place.

We need our fanzines, you know? One of the reasons why I love cult cinema and will usually find something worthwhile in watching even some of the “worst” films ever made is that these works were made by people who didn’t have the resources of major stu-dios or even, necessarily, any particular qualifications to embark on a weird filmmaking odyssey in the first place. But they did it anyway, and usually out of a) an unstoppable love for the genre and b) an idea to make the kind of movie they’d like to see, themselves. As the fanzine landscape continues to evolve and genre blogs close up shop all over the web, I feel our site is kind of like that. As a fan, it’s the kind of site I want to read, full of passionate nerds that will dump way too much thought into obscure or esoteric topics just because they love the stuff.

I hope that this collection of some of our work from 2017 will serve as a thorough introduction for those of you who are less familiar with nerds of a feather, flock together and the work of our team of writers. For those of you who are already fans of the site, I want to convey my deep gratitude because you’re the reason I have the opportunity to write this introduction in the first place. Hopefully this packet can serve, for you, as a reminder of the breadth of topics on which we try to engage: the fiction reviews that form the bulk of our content, the conversations with other creators on wide-ranging topics from electronic music to genre scholarship to Kickstarter, our occasional and recurring series looking at new releases (New Books Spotlight), comics (Thursday Morning Superhero), short fiction (The Monthly Round), genre foundations (Dystopian Visions, Horror 101), or the occasional deep-dive into a particular, narrow topic (Fright vs. Fright, looking at horror remakes).

It’s a ton of stuff. But, luckily, we’ve got a crack team of nerds on the case.


Section I: Fiction Reviews
1. The Stone Sky, by N.K. Jemisin
2. The Only Harmless Great Thing, by Brooke Bolander
3. The Lady of the Lake, by Andrzej Sapkowski
4. The Monthly Round
5. Gluttony Bay, by Matt Wallace
6. Nemesis Games, by James S.A. Corey

Section V: Spotlight on Horror
1 .Horror 101: An Introduction to Fear
2. Fright vs Fright: Invasion of the Body Snatchers
3. Horror 101: The Uncanny
4. Remembering George A. Romero and Martin Landau