The Wheel of Time Reread: The Eye of the World

I wasn’t all that interested in doing a re-read of The Wheel of Time, let alone writing about the series again, until I watched Amazon’s adaptation earlier this year, promptly fell right back in love, and immediately wanted to read the books again. So here we are.

The last time I read The Eye of the World was in 2008 when I started a major push in a full series re-read leading up to the publication the next year of The Gathering Storm, the first volume co-written by Brandon Sanderson after Robert Jordan’s passing. When I started *that* Wheel of Time re-read, it felt like goodbye. I assumed I would revisit the series one day, but I knew it would be a long, long time coming when I did.

The Wheel of Time turns, and Ages come and pass, leaving memories that become legend. Legend fades to myth, and even myth is long forgotten when the Age that gave it birth comes again. In one Age, called the Third Age by some, an Age yet to come, an Age long past, a wind rose in the Mountains of Mist. The wind was not the beginning. There are neither beginnings nor endings to the turning of the Wheel of Time. But it was a beginning. - The Eye of the World

The book and the show are very different things, different turnings of the Wheel if you will, and I am absolutely delighted to be back in this world. I wish the world had a better name than “Randland”, but Robert Jordan never named the continent beyond the Aiel calling it “the wetlands” and it seems weird to call it Europe - though that is something we can come back to much, much later. 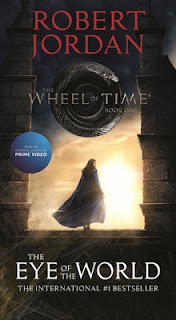 Despite my pure and complete love for the book series, there is perhaps no show that I was more apprehensive about than Amazon’s adaptation of The Wheel of Time. Even seeing promotional photos and watching the initial teaser trailers, I wasn’t sure that Rafe Judkins and the production team could pull it off. Those first images *looked* good, but would they be able to capture the core of The Wheel of Time? I didn’t think it was possible.

An adaptation is not the book. That should be obvious, but there is a delicate balance between “getting” what the book is about, an overly faithful retelling of the book, and missing the point all together.

Most likely, this is the only part of the Wheel of Time re-read that will compare and contrast with the television series. The first season of The Wheel of Time only covers the events of The Eye of the World and some of the parts of this first book that will make the transition into the show have been pushed into the second season and, frankly, I’m going to read the books a whole lot faster than it is even possible to make the show. But, if you want an actual evaluation of the show, please read Arturo’s essay. Since I’m not formally writing about the show, I’ll just say now that I absolutely love the show. It made me fall back in love with the books and excited me to read them again, but I really love what they are doing with the show as its own thing. It’s a different turning of the wheel, but it is absolutely wonderful.

Let’s get into The Eye of the World. Let’s go.

The Dragonmount prologue chapter is still incredible even though the raw emotion is completely divorced from the rest of the book. Probably better than any other possible opening to the series, it really sets up the horror of what “The Dragon” did at the breaking of the world - not how badly his actions broke the rest of the world or what the rest of the world might be going through - but that in his madness from the taint on saidin, he slaughtered his entire family. His wife, his children. Anyone who loved him and anyone he loved. He killed them all - but worse, his home became a kaleidoscope of horrors where his victims were pushed into walls, into the floors, that the foundations of his home were warped with the murders. There is also a face off with the Dragon’s antagonist, a man called The Betrayer of Hope (and that’s an incredible name to have earned) who claims that this is a battle that will rage over and over again throughout time until the Shadow wins.

So when Rand later wonders in the early chapters how bad things would have to be to need help from the Dragon to be born again, who is prophesied to destroy the world again in order to save it - this is what he means. 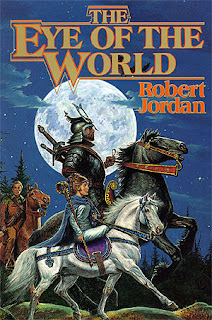 The Eye of the World is a slow novel, and perhaps even slightly slower than I remember. This isn’t just in comparison with the show, which rushes at a breakneck speed that would shock Robert Jordan and also excises large chunks of the book - the journey which Rand and Mat take between Shadar Logoth when they separate from the group to Caemlyn takes almost half of the novel. The moments on the ship are well paced, but readers feel the length of the journey from village to village to village to village on the way to the big city.

The funny thing is that I’m reading this as a single volume ebook of all 14 books in the main line series (New Spring is not included), so tracking my progress is hilarious. “You are on page 63 of 10,250” aaaaaaah! - so other than ballpark memories of how long The Eye of the World is, I was never certain how much I had left. That’s something that will only get worse as the series progresses and I have to do the page count math when I don’t remember the placement of all of the landmarks. It’s oddly fun when I read fifty pages and the overall percentage doesn’t change.

Robert Jordan seeds this first book with SO MANY things that will come to play later. Min’s visions, Jain Farstrider (one of my favorite bits with Noal Charin later in the series, even though this is small potatoes), large crystal spheres mentioned, the Sea Folk and the Coramoor, various bits with the royal family in Caemlyn, all the bits about the Aiel, the Green Man’s throwaway line about Rand and the Children / People of the Dragon, and that’s not even talking about the Horn of Valere at the end.

As much as I enjoy the journey in The Eye of the World before we really know what the shape of the series is going to be and when all the characters are trying to find their place in the tapestry, and in some cases avoid the paths that are going to be laid in front of them - one of my favorite bits from the novel and probably the series is the speechifying info dumps.

It’s not all Moiraine, though most often (but not always) that info dump comes from someone who has reason to know all the things and I am here for it.

I love the deep history, like the story of Manetheren and how Moiraine uses it as a reminder of who and what Emond’s Field and the Two Rivers were and puts them into a historical context and also foreshadows the rebellion and steadfastness of the village later in the series - almost as if the story seeps into the heart of Emond’s Field (this in in contrast for how the show puts “Weep for Manetheren” on the road and separate from Emond’s Field). But also the history of Aridhol and Loiol explaining how the Ways were created. It’s one of the reasons The Shadow Rising is one of my favorite books in the series, because of the glimpse of the past that we get. It’s also why that flashback in the show was so cool, when we meet Lews Therin for the first time and see how advanced his time was.

What I didn’t remember from The Eye of the World was the timing of when Mat started yelling phrases in the Old Tongue. I had thought it was after he had the dagger and possibly after he was healed from it - but here it is already his battle cry on the way to Aridhol / Shadar Logoth, though he doesn’t know how or why he was yelling it. Later in the novel (after a partial healing) he yells even more of the Old Tongue. It’s explained as the blood of Manetheran coming through the generations, but it very deeply ties into Mat’s future. 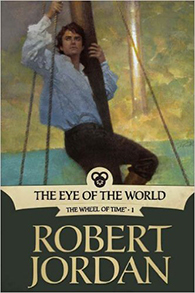 The introduction of Thom Merrilin in the book is vastly superior in the book compared to the show, both because you get the true gleeman bits and him training Rand and Mat, as well as how he responds to Moiraine when he first sees her. Plus, even though Moiraine is playing the Gandalf role here, Thom has a LOT of early playful Gandalf in him. TV-Thom is a grump and there is no real sense of him getting barroom crowds excited and drinking more. The show has him sing one dirge and calls him a gleeman.

The farm kids still have a slight sense of adventure and a sense of wanting to go home. They don’t really grasp how big this is (hey, there’s another thirteen books of adventure, kids!) and how big the threat against them is - not to mention just how important they are to become. It’s not a lark (most of the time).

I appreciate Rand being so excited at the end that he killed the Dark One that he keeps saying “Shai’tan is dead” and Moiraine is all “yes, dear, that’s nice, please hush, stop scaring the children” because she knows there’s no way that’s actually true.

The Nynaeve / Lan not-a-relationship moves pretty quickly here since most of what we see on the page is furtive glances and appreciation for each other’s tracking skills.

The Eye of the World directly introduces two of the Forsaken, promptly kills them (but don’t forget about Aginor and Balthamel because while the grave may be no bar to the Horn of Valere’s call, it’s also no bar to the Dark One bringing back his dead generals) but also reveals that Ishamael, the Betrayer of Hope himself, is also free and that others may be free as well. The novel sort of taunts the idea that the fellowship might have won the battle but Robert Jordan seeds more than enough to know that the battle is barely just begun.

There is so much to come and we’re going to start to quickly move away from the fairly “traditional” (read: Lord of the Rings) journey of this first book into something far more interesting and compelling.

That’s it for The Eye of the World. Next up is The Great Hunt, where a quietly foreshadowed invasion occurs that kind of changes everything. Oh, you think the Dark One is Randland’s only problem? Plus, portal stones.

Joe Sherry. Co-editor of Nerds of a Feather, Hugo Award Winner for Best Fanzine. Minnesotan. He/Him
Posted by Joe at 12:00:00 AM