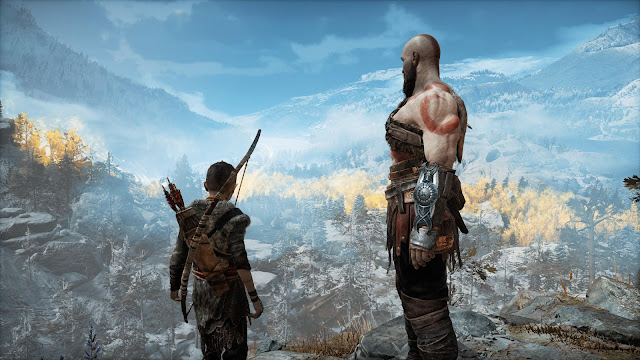 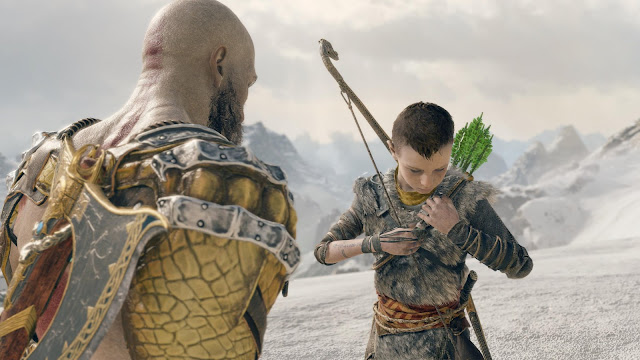 God of War (2018) elevates the franchise that began in 2005 by rebooting everything we knew about the old games and transitioning to adapt to the ever-evolving industry. The gameplay is one of the biggest deviations from the original series of games. The camera has switched from a fixed camera that changed with every encounter to a third-person single-shot camera that never leaves our hero (outside of cutscenes). This has made the game more intimate. Boss fights like the massive scale Cronos showdown in God of War III are a thing of the past, as the camera never zooms out during gameplay to show such a scale. That being said, there are some massive beasts and bosses to fight in God of War, and the new camera makes them feel all the more dangerous and exciting. The spectacle isn’t abandoned, but some of it is sacrificed for the sake of a more grounded experience. And it exceeds expectations. 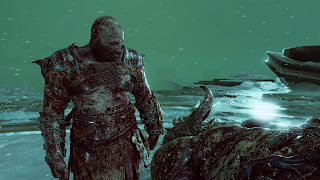 The primary combat mechanic sees the player use Kratos’ Leviathan axe to dispatch foes. There are light axe swings, which are quick but do less damage. There are heavy attacks, which are slower but deal more damage. And then there's the axe throw, the most enjoyable mechanic in the game. The player can aim Kratos’ axe and send it flying at enemies, then recall it mid-flight to continue to use it in combination with other moves. Imbued with ice, the Leviathan axe can freeze foes as well. If Kratos charges his axe throw he can bury it into a foe, freezing them for a short time while he follows up with his fists or turns his attention toward another enemy. Throughout the game, new abilities are unlocked along with runic attacks that keep the gameplay fresh and the combos exhilarating. 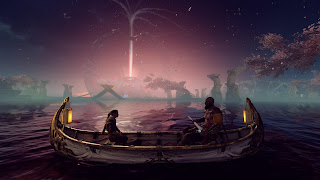 To add a layer of depth to the combat, Kratos’ son, Atreus, assists with his trusty bow. This mechanic is controlled by the player and allows for more strategy within each battle. Do you use Atreus’ shock arrows to do more damage to a group, or do you use his light arrows to stun one enemy and set them up for an instant finisher? Atreus can also summon ethereal beasts with his bow that take on the abilities of whichever bow type (shock or light) you have equipped. The game mechanics are seamless and enjoyable, even when the limits of player skill are tested. God of War bests its contemporaries in the gameplay space, this includes the famed FromSoft games.

The modified combat is a beautiful partner to the new camera. During gameplay, it follows Kratos closely, but outside, it’s a seamless single shot. There are no “cut-to” scenes in God of War which make the game all the more immersive, bringing every event closer to the player which creates no jarring transitions that we find in traditional cutscenes (which are necessary for scenes happening in other locations). To avoid the common camera, the game sticks with our main protagonists throughout the entire journey and it’s something special to see it employed so well à la 1917. It was a huge risk for Santa Monica Studio, but boy did it pay off. Settled and hidden in the Norse wilds, Kratos and Atreus have been tasked by the late Faye (wife and mother to our protagonists) to spread her ashes upon the highest mountain in all the realms. What proceeds is an emotional journey that spans many human issues, but at its core, never strays from the plot; the growth between a father and son. God of War’s laser focus on its themes intertwines into every aspect of the game, making every side quest and errand feel like a cohesive whole like I would have missed out on something important if I’d have skipped it. This is deftly done by employing smooth facial animations and natural dialogue between Kratos, Atreus, and Mimir, not to mention the occasional appearances of the Witch in the Woods, Brokk, and Sindri. Each character’s voice actors do a fantastic job of making these characters feel unique and lifelike. The performances cannot be overstated. The slightest shift in Kratos’ demeanor is monumental and praiseworthy, sometimes raising the hair on my arms or bringing a tear to my eye. 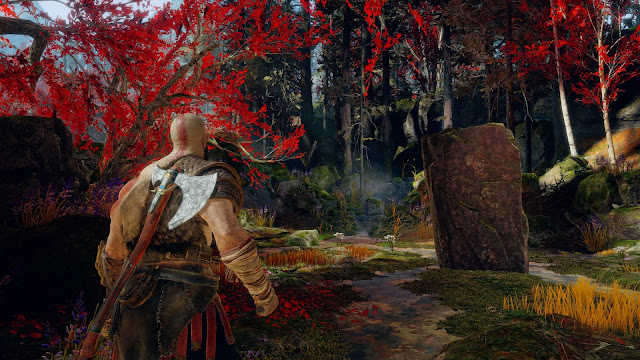 Kratos, abandoned by his father at birth, and later betrayed by said father employing a massive sword through the chest, doesn't quite have the best paternal figure to look up to when raising his son. The only thing he knows is that he won’t do to his son what his father did to him, but other than that, parenthood is a frightening unknown that he’s left to his wife, Faye, for most of Atreus’ life. Kratos would sooner kill gods than show vulnerability. Raised as a Spartan, Kratos was raised to know only fury, combat, chaos, and bloodlust but throughout God of War, we see him issue restraint, to be better than he was. To only use combat when necessary. His organic growth is perfectly paced and sprinkled throughout the narrative. 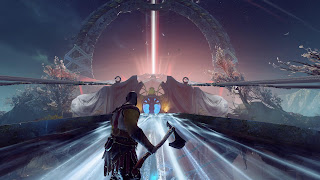 God of War’s pacing is yet another massive praise I have for Cory Barlog and Santa Monica Studio. In an open/hub world, it can be difficult to maintain a steady pace due to all the distractions a game throws at you, but this game sidesteps this problem. Main story missions will cut off side quests when urgency is needed to follow the path of the quest, despite being able to traverse the world.
Traversal is carried out in three ways; by foot, by boat, and through the Mystic Gateways (God of War’s fast travel method). Dialogue is written for all three of these traversal methods, especially via boat and gateways. Mimir fills these gaps in exciting gameplay with lore, keeping the player engaged and invested in the world. If the player exits the boat before Mimir is done telling a story, he simply resumes it the next time you jump in the boat with a “Where were we?” Mystic Gateways bring our protagonists across the map in a fraction of the time. To avoid putting the player through a loading screen, Sony Santa Monica takes our heroes through the roots of Yggdrasil and has Mimir tell them a tale. This fast travel area is a brilliant cover-up that distracts the player while the level loads. In doing this, Sony Santa Monica essentially eliminates load times throughout the games, with the player only ever having to look at a loading screen upon boot up and when reloading after a death. 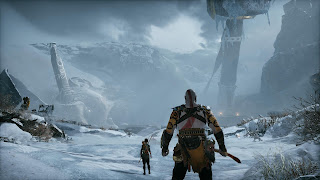 While on foot, combat is accompanied by puzzles that range from timed axe throw sequences to finding hidden runes to unlock chests. The puzzles add a nice change of gameplay that never frustrates, but sometimes take a few moments to figure out leading to fun aha! moments. All of the written lore is also discovered on foot. Since Atreus is the only one capable of reading the runes, Kratos tasks him with keeping the journal, his youthful snark evident in the words. Jotnar shrines, lore markers, and scrolls are the main forms of lore delivery throughout the realms, unlocking some of these will prompt more stories from Mimir! 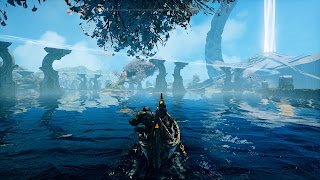 What would a God of War game be without intense, frenetic boss fights? Well, this entry has you covered. Each boss is unique and engaging, from the Stranger to the Valkyries, God of War never lets up. The Valkyries are optional bosses but are the most challenging in the game. Beating them all unlocks the ability to fight the queen Valkyrie, Sigrún, and is she a doozy. One of the most challenging fights I’ve experienced in a game, so make sure you bring your best armor. To upgrade gear in the end game, the player must travel to Niflheim and Muspelheim to have a chance against their toughest foes. Muspehlheim offers combat challenges issued by Surtr, while Niflheim offers a rogue-lite-esque timed challenge, but both realms offer more world lore revelations and welcome distractions from the main quest.

In addition to the masterful character animations, each realm is carefully crafted and oozes beauty and history. Alfheim is a sight to behold, the land of the elves is just as mystical and entrancing as the elves themselves. Helheim’s haunted frost can be felt upon entering its gates, with Hræsvelg looming ever so dauntingly in the background. The main gameplay area, Midgard, is a gorgeous place to explore, with The Lake of the Nine an excellent anchor for the game’s hub world. Years after its release, God of War is still one of the best-looking games thanks to the vision of its art team.

Toward the beginning of God of War, there is a moment where Atreus is tasked with shooting a deer. In his haste, he misses, frustrating Kratos and causing some tension between them. Atreus immediately apologizes, to which Kratos responds; “Do not be sorry, be better.” This game takes this mantra and expands on it, from Kratos’ personal growth to the abandonment of misogynistic tropes employed in the earlier entries. God of War doesn't apologize for its past. It accepts it and uses it to change both the franchise and its main character in a way that benefits the series, the player, and storytelling in the game industry as a whole. 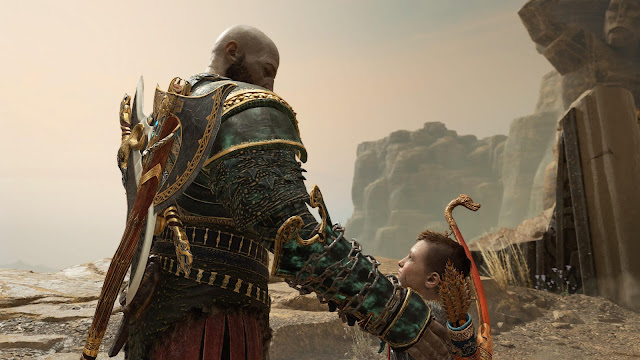 It is rare to see a game like God of War in today’s video game industry: a micro-transaction and DLC free single-player narrative that doesn't overstay its welcome with superfluous padding. Four years ago, when I played God of War for the first time, I remember thinking that I wished more games were like it. Four years later that feeling remains. God of War isn’t just a phenomenal game. It’s a blueprint for the industry, a benchmark that developers have, and will look to embrace in the future in some aspect or another, and that’s quite an incredible thing to experience.
The Math
Objective Assessment: 10/10
Bonus: +1 for some of the best cinematic, engrossing boss fights. +1 for seamless use of single shot camera. +1 for excellent pacing. +1 for natural character development.
Penalties: If anything, I would say that the game could use more basic enemy types, but it never hindered my enjoyment of the game and was only ever an afterthought.
Nerd Coefficient: 10/10
Posted by: Joe DelFranco - Fiction writer and lover of most things video games. On most days you can find him writing at his favorite spot in the little state of Rhode Island.
Posted by Joedelfranco at 12:00:00 AM