Welcome back, dear readers. Today we’re going to revisit the fourth novel in Seanan McGuire’s October Daye series: Late Eclipses. We assume you’ve been reading along with us because this will be rife with spoilers. You have been warned.

Every now and then when I’m researching something else I find an older twitter thread that I either didn’t see because of algorithms or that didn’t imprint on me for reasons. In April 2021 Seanan McGuire noted that every third book in the series “is an emotional pivot point” and goes on to say “Every fourth book, however, is a WHAM. LATE ECLIPSES, WHAM, you were wrong about everything!”. The point McGuire was making was more about what we can expect in the forthcoming Be the Serpent where we can expect to have our hearts ripped out just after we’re coming down from the high of the bloody but ultimately satisfying wedding novel.

But, reading Late Eclipses with the idea of a Wham in mind was interesting because at this point I only remember the broad shapes of what happens in each book and only after I figure out what happens in the particular book. I wasn’t exactly lost starting Late Eclipses, but it took a bit to figure out this was the Oleander de Merelands novel, which means poison and death.

There’s a game that I play throughout this re-read that is trying to figure out when I thought particular events happened. Some things, like the introduction of May, happened far earlier in the series than I remembered. Others, like Blind Michael, are about where I thought. Properly introducing and resolving Oleander here in book 4 seems about right, though I would have guessed that the full resolution would have been in the next book.

There is also an early event in Late Eclipses that probably feels about right for where it lands in the series, which is that Toby is “gifted” the county of Goldengreen by the Queen of Mists and it’s not a gift, it’s an attack. But that definitely seems like something that happened fairly early in the series (book 4 early, apparently).

Late Eclipses is a novel chock full of folks being poisoned, which isn’t exactly something that Toby can punch into submission - not that Toby actually gets to punch things into submission but this is certainly a book where Toby punching out poison would be deeply satisfying. Alas. 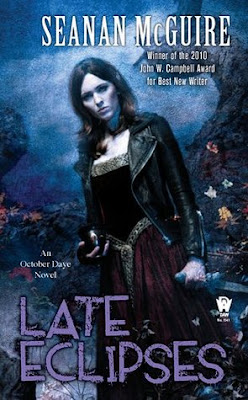 The initial conflict is that Lily, “The Lady of the Tea Gardens” within Golden Gate Park, has been poisoned and that Toby is going to find out why and save her. Except, Late Eclipses is a different book and Toby doesn’t save her. Toby fails. Lily dies. Lily had long been a friend of Toby’s (and apparently of Toby’s mother at one point) and up through the first three books has been a mentor and resource from the older generation - and that’s who Toby failed. Though, I would argue that Toby failed Luna since she wasn’t the one who poisoned Lily’s waters and sometimes that’s the sort of thing that can’t be solved.

And then Luna is poisoned, and with Sylvester dealing with grief and not taking charge of Shadowed Hills, their daughter Rayseline is attempting to blame Toby for Lily’s death and Luna’s poisoning and invoke Oberon’s Law (no killing of pureblooded fae). Rayseline, if we remember, is pretty much out of her mind from when she was abducted by Oleander and Simon Torquill (the inciting event that got Toby turned into a fish before Rosemary and Rue) and never recovered. So Toby has to figure out how to save Luna and get it right this time or her life will be forfeit.

That’s probably why Toby is again at severe risk of dying because her Fetch, May, is starting to mirror Toby again as she did when first appearing in the last book. For the first third of Late Eclipses we’ve come to accept May as just being there as a failed Fetch and now her own creature but it’s pulling a little bit. A Fetch is supposed to be a harbinger of someone’s death and it seemed like after the events of An Artificial Night that May’s role as a Fetch was done but with May’s appearance mirroring Toby’s again the clock is ticking once more. But much less so than in the last book, this doesn’t feel quite as threatening as going up against Blind Michael.

For reasons, The Luidaeg is taken off the board in this novel. At most, The Luidaeg gave limited information over the phone to Toby. As much as I love / fear the Luidaeg, this is probably a good move from McGuire because right now the Luidaeg is both a force of nature (true) and a break glass in case of emergency character and while Toby *should* rely on the Luidaeg she should also do a lot of the work on her own for character growth purposes. Otherwise there is a feeling that the Luidaeg is a Deus Ex Sea Witch and she is a far richer character than that would allow.

“Blind Michael might have been a child’s terror, but Oleander was a terror for adults.”

Seanan McGuire does a fantastic job suggesting just how frightening Oleander is. Oleander is a master poisoner and assassin and she doesn’t have skeletons in her closet, she has stacks of bodies in her closet and everyone knows about it.

Oleander isn’t directly present through much of Late Eclipses, but her presence is in almost every page of the book. Once Toby figures out that Oleander is behind *everything* there is not a moment for the rest of the book that we don’t feel the threat of Oleander until she is killed.

Alright - let’s get to the Wham. There isn’t a signpost saying that *this* is the impactful moment but I think it is the disclosure of Toby’s heritage.

“If you come near my daughter, if you touch her, if you *look* at her, I will know, and I will make you pay.” Amandine’s tone was light. She would have sounded almost reasonable, if not for the fury in her expression…and the fear in Oleander’s. Oak and ash, one of the scariest women in Faerie was looking at my mother like she was the monster in the closet.”

Toby is “Amandine’s daughter”, which is specific phrasing that comes up a lot throughout the series. She is constantly defined by who her mother is and her mother is Firstborn (something that is known, but not yet fully disseminated across faerie) - and THAT means that Toby is not a Daoine Sidhe as she thought she was. Toby is a Dochas Sidhe, one of only two, though there is only a hint that there is a sister in a sort of “No, there is another” / Empire Strikes Back thing.

What *that* means is that so many of the problems Toby was having in regards to her magic is that she was trying to use it in ways that she was not equipped by heritage to use. Also, Amandine, being a Firstborn blood worker changed the amount of fae that was in Toby’s blood and made her more human than she should have been.

With that in mind, Toby significantly levels up when she is near death (or, actually dead according to May) and has to make the Changeling’s Choice a second time in her live and Amandine changes Toby’s blood quotient to be more fae in order to save her live. All that mess with “magic burn” and barely being able to cast spells - that’s gone now.

But that reveal of who Toby is (and what her mother is) leads to something that is unfortunately going to be a major theme of the series - Sylvester knew and said nothing. This is is first betrayal of Toby’s trust. He knew about Toby’s past. He knew who Amandine was, that she was a Firstborn. He know that Toby was a Dochas Sidhe rather than Daoine Sidhe. He could have made Toby’s life so much easier by telling her instead of letting her struggle against something she knew nothing about. But Sylvester kept a promise he made to Amandine over the girl he considered the daughter of his heart and those promises will keep coming back to bite Sylvester and Toby’s heart and their relationship will pay the price. It sucks.

So what I will leave you with, besides the continued hints towards the future October / Tybalt romance (Tybalt kisses Toby! It’s used as a ploy earlier in the novel, but there is Tension! There are unresolved and complicated feelings!) is what feels like a prophecy from Oleander:

Oleander snorted. “I wouldn’t take aid from you if you offered it. Never from you, daughter of Amandine, last and latest child of the great betrayal. You’ll see the end of us all, and you won’t be content until you know the gates are locked and sealed; your own death will refuse you. You’ll destroy your beginnings and forsake your heart’s desire and there will be nothing for you but what’s already been turned aside…”