In this edition of Roll Perception Plus Awareness, I reintroduce the column in a new space, and take a look at Heirs to Heresy from Alan Bahr and Osprey Games. 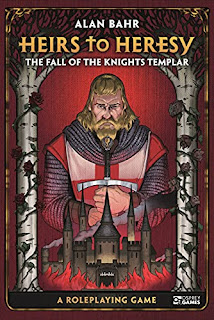 Once upon a time when the Internet was young, there was a place where I built up my skills and techniques as a reviewer, interviewer, Mind Melder, and critic. That place was SF Signal. Among the many things I did there was something I haven’t continued on in other venues such as the Hugo Award Winning Nerds of a Feather here, and that Roll Perception Plus Awareness¹.

Roll Perception Plus Awareness is a column that I did at SF Signal that focused on my passion and love for roleplaying games. I’ve been playing RPGs of various sorts for nearly as long as I’ve been reading science fiction and fantasy, from First Edition Dungeons and Dragons, to, most recently, games like Root the Roleplaying Game. I’ve played and play RPGs in person, in Tabletop Simulator with friends, streaming to viewers, and currently GM  two play by email games. So I am going to bring this experience to you, the reader, with games I buy and read, and games I play at the table.

So let me switch into the game for today, and that is Heirs to Heresy: The Fall of the Knights Templar, written by Alan Bahr and published by Osprey Games. It is a hardback book of approximately 190 pages.

The Concept of the game is one that is familiar to conspiracy theorists and the History Channel, as well as a number of movies of varying quality: The Knights Templar. Bahr spends a chapter, after the “What is a roleplaying game and what you need to run this one” giving a potted history of the Knights Templar from their origin in 1099 to the “present day” of the game in 1307. The game generally starts on a fateful Friday the 13th, October 1307. The King of France declares the Templars heretics and traitors to France. Many are captured, others killed. Thirty of them escape the initial attack, surrounded by enemies, unsure of who or what to trust.

As players, you play one of the thirty survivors of this attack. You are entrusted with the fabled (especially on the History channel) Templar treasure, and are to take it to safety. But where is safety in a world where the King of France has turned against you?

In the RPG Sorcerer, designer Ron Edwards came up with the idea of a “Bang”, an event in an roleplaying game that sets off the action for the character(s). It is an event in the game, often but not always the inciting incident in a campaign or scenario, that the player and character simply cannot ignore. Heirs to Heresy uses the events of October 13, 1307 as the “Bang” for the characters and their players to face. They are deep within hostile territory, with enemies all about, many of their friends, companions, leaders are dead or captured.

There are three basic questions the GM and players must consider, which provides a variety of axes to play and set up the game and customize to to suit a particular RPG table’s needs and wants. Bahr goes into detail into these choices, so that a gaming group cane come with one of a variety of scenarios and campaigns of varying lengths to suit their taste.

What kind of treasure do the players carry?  Is it simply gold, jewels and material wealth, or is it a holy relic, or is it something with actual magical power? (You can customize your game to have as much magic as you and the players want. You can play it straight and gritty, or mystical and esoteric, or take a middle ground)

What are the truths of the Templar Order? This is a question more for the GM to come up with and to think about, and for the PCs to discover, uncover, use, or rebel against. Just what was the Templars plan? To form a polity of their own? To continue to amass wealth and power and affect the course of Christian Europe?  To crusade against literal demons and the forces of darkness? Or, are they actually corrupted from within already?

Where are the players going?  They’ve been given a treasure, they need to escape the French assault, but what is their final destination? What is their goal? Like Michael Moorcock’s Tanelorn, Bahr uses a neologism for the ultimate goal and destination of the PCs: “Avallonis”. Depending on the style and nature of the campaign, Avallonis can represent any number of places: England, Portugal, Malta, the remnant of Outremer in the Holy Land, or a city in faerie that the knights must battle to reach the portal to access. Avallonis is, as the book puts it, whatever and wherever the PCs need it to be, a destination informed by the journey.  Depending on the game, Avallonis may be just an aspirational goal, one never actually reached in game, a shining beacon of hope, all alone in the night, but never quite in reach.

Heirs to Heresy uses the full range of standard polyhedral dice, plus uses a “token in a bag” system to handle initiative. The basic test of a skill is rolling 2d10, adding attributes and skills (which generally range from 0 to 4 or 5) versus a difficulty. Trivial tests require a 12, difficult ones require a 20 or higher. A critical success (which provides advancement points) occurs when both dice have the same number, AND the test is successful. Critical successes also allow for additional damage in combat, or a flourish in a non combat situation. Both players and GMs alike can call for skill tests.

Other PCs can aid tests, if they have enough skill to do so, and if another party is actively trying to stop you, the test instead of being against a set difficulty is against the GM rolling the opposition. Or, if two PCs are in active disagreement with each other, the other player rolls just as the first one does to determine the outcome.

There are no fumbles in the game, only success, failure, and critical success.  Bahr’s philosophy is that failure should always lead to an interesting and compelling narrative, not stop the flow of the game.

There are no non-combat stats for opponents in the game. Combat is a different story. Rolls for the opposition are based on the initiative system of tokens,and are dangerous according to whether they are Mobs (Mooks in the Feng Shui parlance), or Fearsome Foes. Both kinds of enemies can have specific qualities as well, such as “Brutal” (do more damage on critical rolls). Keeping the enemies from having out of combat stats means that there aren’t huge stat blocks dominating the book.

Overall, the combat is relatively straightforward and narratively based. It uses a Fate-like “zones” system to determine placement of PCs and opponents and add some mental narrative crunch to combat. One does not need to use miniatures and a terrain map to run combat in this game, given enough narrative information and imagination on the part of a GM and players, although a running fight by the PCs through a castle could certainly be one where pushing minis on a map might be quite fun indeed.

For a 190 page book, the book is succinct and comprehensive in offering up things to the players and GM alike. Rules for travel, opponents, the “Pursuit Point system” (which is sort of like a doomclock in how much “heat” there is on the PCs at a particular moment).

The book and rules are as inclusive as a story about the Templars can be. There are some limitations made by history--Templars need to be Catholic knights, for example, but it does not insist that Templars need to be white men of deep Catholic faith. If you want a converted Berber woman who is Catholic but mostly secular in her outlook as your Templar Knight...you can do that. The RPG is historically informed and infused, but it is not hidebound to it.

The rules for esoterica (magic) are a bit firewalled from the rest of the book, because, as mentioned above, you could play a straight gritty game without a hint of Baphomet in it. There are three types of Esoterica, and a campaign run by the GM might have none, or any or all of them in it. Magicks are straight up spells, learned by studying relics. This ranges from a healing spell all the way up to binding angels and demons. It’s made clear that even in a high magic game, magick is dangerous and is a great way to get the Inquisition to want to hunt you even more. Blessings, the second type of magic, holy gifts from saints. The short list of saints, it is pointed out, can be supplemented because of the sheer number of saints in the Catholic Church, even as of 1307 AD. The third kind of esoterica is martial focused, and ranges from striking quickly to Wuxia-adjacent running up of walls.

That last thought brings up the toolkit aspect of the book. In addition to all of the Templar hooks a GM and players could want to devise, this system could be used for parallel situations, both real and imaginary, to tell stories of a small band under threat, trying to survive or reach a distant, dangerous goal while beset by enemies on all sides. With just a few tweaks, for example, one could do a riff on Xenophon’s The Ten Thousand. There are rules for mass combat in the books, so having a band of Greek Mercenaries try to fight their way out of the Persian Empire, pursued and hunted--Heirs to Heresy could be used as a system for that. Or, say, moving forward in time, a group of Byzantines trying to escape the fall of Constantinople with some holy relics, trying to reach safety in the West, or perhaps a more mystical location. Or, say, a group of Buddhist Monks trying to escape the persecutions of Emperor Taiwu of Northern Wei.

The Verdict on Heirs to Heresy at this time is incomplete as, inevitably in this day and age, I have not yet actually given it a try as GM or as a player. Based on the writing and presentation in the book, and the mechanics as mentioned above, this is a game I definitely way to give a try and see how it runs in practice. My fecund imagination in thinking about this game tells me this is a game I’d love to run or play.  The strong presentation of theme, the excellent nods and moves toward inclusivity and welcoming players of all stripes, and the overall tone of the book are extremely positive for me. In addition there is much that Bahr could do with further books given this foundation.  I imagine an expansion for, say, a Quest for Prester John, easily. There is a solid foundation and chassis here for GMs and players to tell stories.

¹For those wondering how I came up with the column name: In the World of Darkness games, rolling a stat and a skill is the usual way to do something. In the Roleplaying game Exalted, which I have GMed a lot of, in order to “spot something”, you roll a dice poll of your stat Perception and your ability Awareness.