All the virtues of Kate Elliott’s work, in a new world, at concentrated novella length. 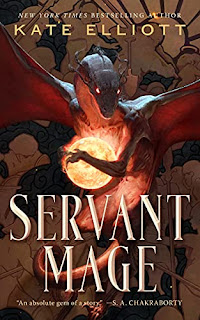 Fellian is the titular Servant Mage. Her lot is a hard one, for a crust of bread and some meat scraps and a place to stay, she uses her fire magic talents for the purposes of lamplighting, for the Republic that has overthrown the mage-dominated monarchy. Her indenture is involuntary, and seemingly designed, like a company store, to last forever--even to take a bath adds to one’s term of service. A failed attempt at escape could doom her to decades more in service. So when a group of rebels offer her her freedom in exchange with help in rescuing some pro-monarchist refugees trapped in a mine, Fellian’s choices are not as easy as one might think, and her goals and powers are more than anyone believes, including Fellian.

This is the story of Kate Elliott’s latest novella, Servant Mage.

The worldbuilding and development of the same is something I read for in Elliott’s work as much as the characters (and when I first started reading her, I focused exclusively on that, and only a bit later realized--hey, these characters are really well done TOO). I like to see where I perceive resonances and influences in people’s worldbuilding.  In Servant Mage, the historical/sociological perspective of the world kept dragging my mind to both the English Civil War of the 17th Century and the French Revolution of the 18th Century. The newish head of the government that has toppled the old Monarchy is called the August Protector, but the Nobility has suffered greatly in a “we are all equal” (except for the Mages of course, who must serve) in status and rank. The very culture itself is being rewritten in a way reminiscent of some of the odder consequences of the French Revolution. The Monarchists are a constant threat (or perceived threat) but there do not appear to be any concerns about threats outside the borders. Fellian’s origins and home ground, to me, feel a lot like the highlands of Scotland, held only loosely by the central government.

Where Mages fit into this history and culture is one of the hearts of the novella’s worldbuilding. While the previous monarchy does not appear to have been a full on Mageocracy, Mages clearly were in high roles of power, authority and also used to support the royal regime and the nobility, so that when the revolution came, the role of mages was cast down to servants, close to outright slavery in some cases, and clearly trying to diminish and harness their power. We don’t get an outright sense of how many people are born mages in this world, but the simpler magics (such as Fellian’s lamp lighting) are woven into the assumptions and practices of the world. We get a story of where magic reportedly comes from, and much more.

The magic itself is of a five part Western Classical Elemental (Earth, Air, Water, Fire, Aether) at its base, with some additional elements involving spirits and demons. There is much discussion and debate regarding the nature of magic, and its nature does wind up driving some of the plot, as well as the character development. With the mages stuck in the asylum, and rogue mages considered dangerous, I got a bit of a Dragon Age bit of feel in how magic is used, viewed, and feared, especially in this brave new world of the Lord Protector. I also got a bit of the Exalted Dragon Blooded as well sort of feel in how magic can be potentially combined by practitioners.Having Fellian, who only is really aware of, much less using, a fraction of her potential, as our viewpoint character, gives us a perspective that is mage-centered, but also provides for a lot of opportunity for the reader, and Fellian, to learn.

One interesting commentary Elliott puts into the worldbuilding is the nature of story and how events are transmitted. (With commentary on information, its control, and who is taught and what are they taught).  Fellian learns/is told a couple of perspectives on a historical event--the fall of the last Monarch, and judging how things actually happened is left for the reader to sort through the sides to the story. This is difficult enough to do with multiple points of view, but here Elliott walks a tightrope in collapsing it into a single person’s mind and perspective. This subsequently makes me wonder about a few of the other things we are told, and how much truth, lies, falsehoods and false hopes are contained within those as well.

So let’s jump to the characters. Our story is a single POV from our titular Servant Mage, Fellian. Right away from the beginning Elliott lays down the essentials of her nature, her ability, and her drives. If character traits can be said to be Chekov’s Guns, all of them that we see early in the novella, before she winds up on the road, are primed, and eventually fired. Strongly defined women with multisided and complex personalities as our viewpoints and guides into a world and story IS Elliott’s jam, and Ferrian brings that in spades. Elliott uses her knowledge and ignorance in helping to flesh out that aforementioned worldbuilding, but even as a young Mage backfooted by events, she wastes no time in trying to take command of her own destiny, her own wants and desires. I’ve read too many series and novels, maybe you have too, where the main character, especially a young one, gets buffeted and dragged about with a lack of agency for a lot of the book. This is especially true of female characters and by authors who shall remain nameless and should know better.  Not so with Elliott’s work.  Fellian may be in a position of weakness, being a servant/slave at the beginning,  but she is no passive passenger in her own story.

The remainder of the Mages that Fellian winds up with are a diverse and interesting lot. We get a prickly relationship with the leader of the group, right off, as Fellian’s attempts to negotiate the price of her help runs straight into his needs and wants. The remainder of the mages each get their moments, not only to show what their magic can do, but how they fit in with society, and with each other. There are plenty of revelations about the characters which makes it difficult to talk about them without being spoilery; Elliott’s characters wonderfully and vividly fitting into the story, plot and world. But, given Fellian is our only POV, it is she that we learn most of, and best.

Elliott’s work is generally of longer, even doorstopper length. Having her work in a novella is like going from the rich wine of her regular work to something more like a distilled liqueur, the alcohols of her character, worldbuilding, and writing concentrated all the more. I had a tension between racing through this, heady and joyful at reading it, and wanting to slow down a bit and savor the complex flavors brought to the palate. I freely admit my biases here. I've been reading Elliott’s work for a couple of decades now, so my enthusiasm for her work is also well known.

In the end, Servant Mage feels like the opening to another world and series, and its ability to stand alone is a bit precarious, I feel. There is a balancing act between providing an offramp to readers who want to end with the one story, and providing rope for readers who might want more, and need to be persuaded and urged to salivate at the prospect of a second or more stories with the characters and the world. For all that written fiction is hundreds, thousands of years old, these balancing acts are like approximate solutions, and what works for one set of readers may not work for another.

However, as I look at it from as objective a position as I can, there is a complete story here, the goals of Ferrian as we see them at the beginning of the novella are met. There is a fillip in the book where a reader might think she would take a different course, but Elliott’s strength of writing character and consistency of characters and their needs, wants and goals is something to hold onto throughout the novella. That said, the achievement of her goal and the revelations of same leads to a whole new set of possibilities and goals...it may be an ending, but it really feels more like the first “book” in a longer piece and the ending makes no bones about it. So there is an offramp for readers who want to stop here, but it's a relatively thin and mild one. As for me, I will be continuing down the road, awaiting more from the author in this world, with Fellian as her main character (although I would not be admiss to more perspectives. Even today, a single POV is a bit unusual and different for me to read in an Elliott work)

Bonuses: +1 for strong and vivid worldbuilding, concentrated into a novella length.

+1 for excellent characterization of our protagonist, managing a multisided perspective from a single point of view.

Penalties: -1 Is there an offramp for readers who want to one and done this? Not quite certain.