Microreview [Video Game]: Marvel's Guardians of the Galaxy by Eidos-Montréal

Get your Walkman ready for this one. 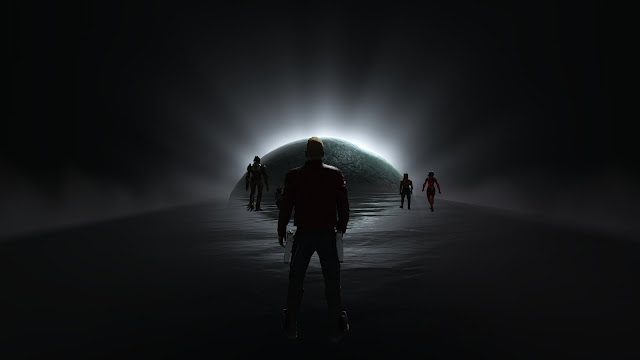 Marvel’s Guardians of the Galaxy begins with our eclectic heroes attempting to make a name for themselves. In typical Guardians’ fashion, they try to achieve this in a way familiar to them; by breaking the law. As one can imagine, this leads to conflict with the Nova Corps officials. After that, well, things get a little wild. At one point, with the protagonists entrapped, I found myself using the singing voices of the Guardians—to the tune of “Don’t Worry, Be Happy” by Bobby McFerrin—to compel/repel a space llama to eat some wires so that we could free ourselves from our rooms. Yes, I typed that correctly. Marvel’s Guardians of the Galaxy isn’t just ‘80s classic music, hair metal, massive explosions, hordes of religious zealots, vicious wild beasts, dogfights in space, intergalactic travel, and well-timed jokes sprinkled throughout a video game. Those things are all included, to be sure, but that only scratches the surface of this wonderful narrative-driven superhero game by Eidos-Montréal. Under all the wild theatrics of the galactic threat, the game digs into the trauma of each protagonist, fleshing out each character in the process (except for Groot who repeats the same three words). The game shows that no matter how jagged or irregular puzzle pieces are, if flipped around enough times, they may just be a perfect fit.

In contrast to many big-name superheroes, the Guardians' main draw is that they’re a team. The Guardians have the initial instinct to run when they need to deal with their problems, but find solace when they turn to their companions. Some of the best moments in this game come from the tender interactions between all of the Guardians, not only does the team become stronger as a whole, but so does the narrative. Overcoming personal hurdles unlock in-game abilities that can be used in combat. These abilities lead to more options while taking down the wild beasts and promise-driven enemies encountered throughout the adventure. 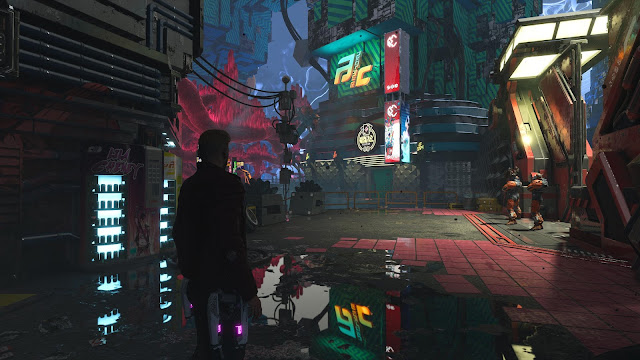 While the narrative has a great arc, there are some minor technical gripes I had throughout my journey. Stiff and sometimes janky animations lead to the ruining of some serious moments. For example, every time Peter Quill has a one on one conversation with one of his crew-mates, it ends abruptly with them quickly doing an about-face and exiting the room. They could have just discussed their years of enslavement or the death of their family, and then they quickly exit the room. It's an awkward animation that was overlooked, or worse ignored, by the developer. This game is also guilty of having button prompts in which the player unknowingly advances the narrative. This can sometimes be frustrating for someone who wants to explore an entire area before moving forward. 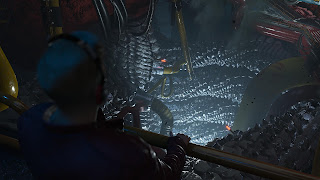 But what about the gameplay? Unfortunately, this is where the game loses most of its luster. The traversal is hindered by pedestrian platforming mechanics that don’t feel great when using them, not to mention the lack of a sprint button. While Star-Lord does have jet boots to boost forward, it’s irritating to have to constantly press the button every second to increase movement speed.

I am thankful for the puzzles, simple as they were, as they add a fun bit of variety that takes advantage of the different Guardians’ abilities. Groot can build bridges and lift platforms with his roots, Gamora can cut through certain objects or help boost Peter up to platforms he couldn't reach otherwise, Drax uses his strength to move otherwise immovable objects, and little fuzzy—sorry Rocket—can hack things and climb into small openings. This represents Peter Quill’s position as leader, as the player issues these commands wherever necessary to advance. In between all the fun story beats and puzzles, there are some enemies to kill. If I’m being honest, the combat wasn’t the best part of the game. While no means awful, the combat doesn’t reach the heights of other great superhero games like Marvel's Spider-Man or Batman Arkham Asylum. Serviceable, unmemorable. You can use Star-Lord’s blasters and elemental abilities to take down enemies, as well as a few special abilities which can be unlocked through leveling up or spending some of the in-game collectible currency. In addition to Star-Lord’s abilities, the player can command the other Guardians to use their abilities in combat scenarios. There are moments of fun to be had to be sure, but I would sometimes get stuck in the command menu while trying to fight enemies, which in turn would ruin the combo I had. Over time, I figured out what was going on, but it wasn’t initially intuitive. 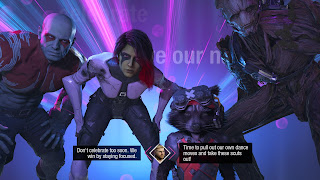 I give Eidos-Montréal credit for ensuring the game had a plethora of enemies to be overcome with different strategies that consistently force the player to use their newly unlocked elemental and stagger abilities. When the team is down and out (or when you accidentally press the wrong buttons), Star-Lord can rally everyone with the Huddle ability. Here, the other Guardians come to Star-Lord with eager enthusiasm for the current battle or come to complain about their predicament. It’s up to the player to choose the correct dialogue option, a failed one only gives partial benefits, while the correct one excites the team. At one point, Drax told me that my speech made no sense, and then we launched into battle to the tune of “Never Gonna Give You Up” by Rick Astley. I couldn't help but laugh aloud. 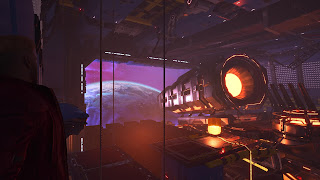 Speaking of laughing, Marvel’s Guardians of the Galaxy is a treat when it comes to witty banter and well-timed punchlines. Drax’s consistent barrage of impeccably placed dialogue is commendable. I can’t count the number of times he made me chuckle, not to mention the rest of the team yelling at each other across the Milano. The fastidious writing team at Eidos-Montréal succeeded in capturing the comical essence of this ragtag group with utter proficiency.

In addition to the dialogue choices mid-battle, there are other areas of the game where choices are presented. Throughout the journey, Star-Lord is given options in how to respond to his teammates. Should he boost up the morale of the whole team, or give in to the melancholy to try and relate to how they’re feeling? Should he back Rocket or Gamora? Join in on the teasing or make everyone back off? Even better yet, there are some sequences in the game where the player choice will change the entire level that must be navigated. While they don't have any impact on the overall story, they do offer some extra replay value for a second run. 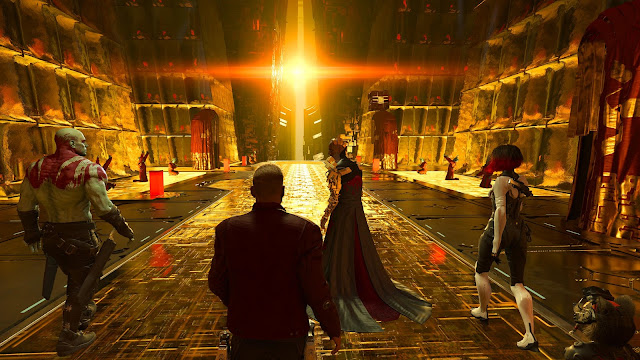 What would a comic-book-based video game be without references to its source material? Guardians has many unlockable costumes hidden throughout the game, some that reference the comics, others the MCU films. These are a nice nod to the other media appearances of these heroes while also contributing a little background info. Other collectibles include items that can be used to trigger unique dialogue with different members of the team. Finding these items was always great because I knew I’d get some more character lore once I got back to the Milano.

For all that Marvel’s Guardians of the Galaxy gets wrong, it does a lot more right. While the combat and platforming can be lackluster, the writing team deserves a lot of credit for lifting this game above its mechanics. The story, characters, music, and jokes are the heart of this microtransaction-free super-hero adventure and I look forward to seeing more Guardians games in the future.
The Math
Objective Assessment: 7/10
Bonus: +1 for well-placed dialogue throughout the entire runtime. +1 capturing the essence of the Guardians of the Galaxy. +1 for Lady Hellbender.
Penalties: -1 mediocre gameplay. -1 for odd and janky animations.
Nerd Coefficient: 8/10
Posted by: Joe DelFranco - Fiction writer and lover of most things video games. On most days you can find him writing at his favorite spot in the little state of Rhode Island.
Posted by Joedelfranco at 12:00:00 AM