A multiverse SFF story about the bonds and bounds of a group of friends, and what they owe to each other. 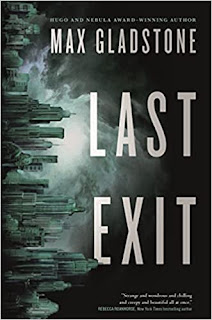 Zelda has a problem. For the last ten years, she has been traveling the United States, using her gift to heal the cracks in the world to try and keep together a 21st century US that seemingly is on the brink of falling apart. Ten years ago, she and her friends, including her love, Sal, made a daring journey into alternate worlds. That journey ended in disaster.

But now Zelda needs to get the band back together, to journey back into the alternate worlds. But her friends have moved on from traveling the dangerous alternate worlds. But with Sal’s young cousin June, who has unusual powers of her own, the need to find Sal is stronger than ever before. But what forces are chasing them across the real and alternate worlds?  And what precisely happened to Sal?

These are the big questions at the heart of Max Gladstone’s Last Exit.

Portal fantasies are something that go in and out of fashion in SFF. Until a few years ago, Portal fantasies had been fallow, taking a backseat to subgenres like Grimdark, the prominence of the Martin/Abercrombie/Erikson style of fantasy, and so on. With authors like Seanan McGuire, Alix Harrow, and Foz Meadows, multiversal fantasy has seen a resurgence. Much of this new crop of multiversal fantasy has been sui generis, or reaching through to fairy tales, or to epic fantasy. Works really in conversation with earlier generations of multiverse fantasy are thinner on the ground, much less taking them apart.

Enter Last Exit. Last Exit has many parents, but the ones you will see immediately are both from the pen of Roger Zelazny. Roadmarks and The Chronicles of Amber.

Let me tackle the second one first, since it is the weaker influence. In many ways this story is a “take that” at the Chronicles of Amber. In that series, it is an upper crust of nobles from one (two if you count the Courts) families who walk a Pattern/Logrus and are the only “real people” in a world of shadows who can travel between worlds. And as commonly depicted, these people are very much mostly white men having the balance of power in Amber.

My contrast, Gladstone’s travelers across the “alts” are ordinary people from a variety of backgrounds on Earth (the diversity of them on all axes is stark compared to the Barimen family). Their control of their powers is not as assured as Corwin, Fiona and company (I kept thinking of their powers in terms of a Second Amber Series “Broken Pattern”, especially given the alts and situations they keep falling into). There is, as it so happens, a Princess and a Castle in the novel, and are quite a central point to the resolution to the story.

But Roadmarks, I think, is an even better fit for an inspiration for Gladstone, even if Roadmarks itself is not *quite* a multiverse story, but is at its heart a time travel/alternate history  novel. Roadmarks is the story of Red Dorakeen, who is trying to get to a place he can’t quite remember. Red is eventually joined on the road by his son Randy, who is new to the Road, the path that he can and does take along the flow of history. Red’s twisting relationship is with Leila, with a narrative and storyline that only becomes clear in the end. Red is running from forces he is not quite sure of the origin or provenance of. Each of these has a cognate within Last Exit, the parallels are clear to a reader of both.  One thing that Roadmarks lacks, but Last Exit has, is the space for all this. Roadmarks is a short novel and the ideas and scenes stuff the novel to bursting, with some of what is introduced getting short shrift. Last Exit has much more space in order to let his environment and ideas thrive. I think it makes an interesting “response” to Roadmarks and I encourage readers to read both.

Gladstone’s idea of the alts, is difficult to talk about, because there is a central mystery to the alts that you don’t quite realize is a mystery until the author points at an aspect of them that the reader takes for granted for a bunch of the novel. Gladstone’s penchant for description and evocation of the worlds next to ours is top notch, and immersive. His story is not one of tourism of these alternate worlds. Frankly, traveling these worlds is not a glorious pilgrimage along the road, but very much a labor. This is not the kind of multiverse fantasy where Gladstone will dazzle you with wonderful places they visit. No, not at all. The alts are dark, twisted, broken, apocalyptic. His road is not one I’d want to go off running onto, Camera in hand. No indeed.

Even more so, no surprise for those who have read his previous work, is that he gives some thought to the limits, and abilities and consequences of the powers the protagonists, including young June, possess. Like Amber, there is enough of a quasi hemi demi science fictional consideration of a fantasy concept to make the novel much more of a science fantasy sort of work, and I am here for that. There is enough of the numinous mystery of how it all works, including to the protagonists, to keep readers wondering and thinking and being drawn forward by that rope, as well as the other strands of the narrative.

But as much as Gladstone sets up all of this worldbuilding and thinking about multiversal fantasy and being in conversation with the older generation of multiversal fantasy, this is not, in the end, a story about those powers, about traveling lots of alternate world, of seeing wondrous (even darkly wondrous vistas).  No, this is the story of Zelda, and how her relationship with Sal went wrong. Of how she and the other travelers came together, and fell apart, and how they come back again to get the band back together, to try and finish what they began. Of how June, Sal’s cousin, fits into this found family on the road. Of how time, and circumstance, and life, have changed these individuals, what they have done after leaving their company, of how they have tried to make their way in the world, and how they try to fit back together for this one additional attempt to make it all work, and make what they once had, work.

In many ways this is a book that is a punch in the gut to read. Not only the state of the world, as depicted in it...this is firmly a book of our times, our place, that could not have been effectively written in the 20th century. It’s also how relationships form, are messy, how they fall apart, and how the attempts to rebuild or restore things is far far more difficult than any movie or book can imagine. How trying to protect a small corner of the world, even a few people, can be an act of heroism as great as trying to save the world. The book is not blunderous, it is sharp, it cuts like a monofilament blade, fillets your heart, but in the end all makes sense and you stand at the end of the Road, glad that you have taken a harsh, unforgiving, but rewarding and immersive journey. Going into this book, I was expecting an immersive Gladstone book that might especially be good in audio form for one of my road trips. Instead, I got an experience very different, and vastly more rewarding than I imagined.

Bonuses: +1 for very strong characters and fraught and messy relationships between them. For a world with multiverse travel, it is the characters more than the landscapes and locations which ultimately sing the best.

+1 for not being the book that I was expecting--for being something deeper, and more, than I imagined going on.

Penalties: -1 The book may well not be what all readers are expecting...this is a two edged strength and weakness to the novel.