A close-up look at the personal consequences of necropolitic decisions 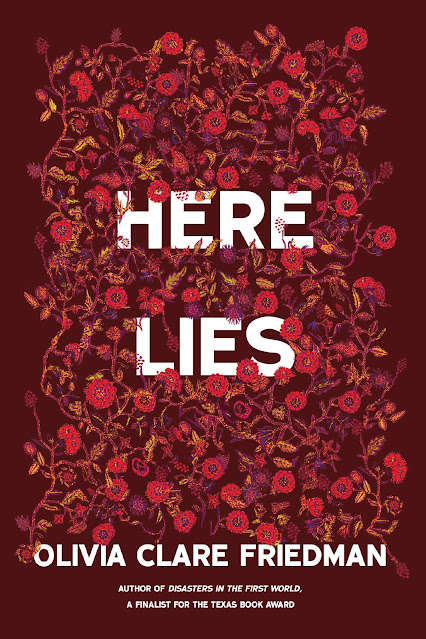 In a near future where global warming has brought devastating storms and dying ecosystems, and the rising oceans have swallowed the coasts of the world, humankind has gotten so desperate to make every available piece of land usable for agriculture that the U.S. has abolished cemeteries. Corpses are now routinely cremated and stored as government property. If we thought the climate crisis would drive humanity to prey on itself, this scenario shows a horrific extension of that forecast: it's a future where human beings have no say on their final resting place.

However, Here Lies is not here for the academic and juridical debate that its premise seems designed to invite. It's not a story of legislators or social reformers. It's the story of an ordinary citizen with negligible power, a tiny statistical point in a faceless wave of dehumanization. Alma, a recently orphaned young woman living in Louisiana, is navigating the arcane rules of bureaucracy to try to reclaim her mother's ashes from the government. The narration follows her everyday routine without toning down its dryness and hopelessness. She depends on unemployment checks, only has one friend, can't keep track of the cat she inherited from her mother, and spends her day between the TV and the computer screen. The world is an uncertain place, she doesn't see a place for her in it, and all she wants is to have her mother's remains in a place that at least is known to her. This is a remarkably tiny scope for the plot of a whole novel, but the author guides us to a rich vein of emotional depth inside Alma. Here Lies makes reference to big ideas, but it wastes no time in abstractions. It's primarily concerned with how those ideas impact real people. It's a novel where the political truly becomes personal.

While Alma struggles with paperwork and procedure, we see her adopt a new friend into her house: pregnant teenager Bordelon, who has also lost a family member, but is resigned to not being able to recover the ashes. The plot establishes a parallel between Alma's desire to hold in her hands the recipient where her mother is kept and her reluctance to touch Bordelon's pregnant belly. The fact that both "containers" yield their "contents" at the same time reinforces the analogy suggested several times in dialogue between the freedom of choice regarding childbirth and the freedom of choice regarding burial. It's an apt symbolic device: if political theory derives from ethical theory, then laws express notions of a preferred way of life. In Here Lies, the government's version of the preferred way of life extends to a preferred way of death. A government that can constrain your childbirth decisions can also seize your remains and keep them hidden.

The tension between the personal and the political is the main focus of Here Lies, to the point that not much attention is given to the believability of the worldbuilding. It doesn't really matter that the abolition of cemeteries is an extremely unlikely result of land scarcity; it doesn't matter either that a law banning all manner of funeral rites would never have a realistic chance of being passed. That's not the point. The author's effort is not invested in making an accurate forecast of the future, but in exploring the inner strength that's still available to the powerless when they rely on each other.

With its reduced cast and limited timespan, Here Lies is a very small story, but it's written with a quiet lyricism that reveals a protagonist with a vastly rich inner life. She's not trying to change the world or overthrow the system or liberate the downtrodden, however much her world screams for such drastic changes. No, sometimes it's enough for a story to concentrate on the lives we neglect because we assume they're of no consequence. Someone like Alma means nothing to the wide world. But getting her mother's ashes means the world to her, and that conviction sustains the entire story.