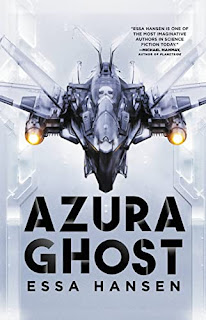 Nophek Gloss introduced us to Caiden. Grew up on a colony planet, completely unaware of the colony’s true nature and purpose--a feeding ground for the Nophek, a predator creature whose brains concentrate Gloss, one of the most important substances in the universe. Escaping the death trap of the euphemistically labeled ‘Harvest’, Caiden found himself plunged into a multiversal world caught between several factions vying for control of a universe fractured into many worlds with slightly different physical laws and properties. His discovery of the Azura, a ship with abilities and powers far beyond this diminished age, makes him a target seeking to use him.  The end of Nophek Gloss has caused an upset in the balance of power, and with Caiden on the run.

Now, ten years later, Caiden and the Azura are legends, a one man, one ship, and one young Nophek crew doing good across the multiverse, staying ahead of the forces of Unity led by Abriss Centre, and dreading what will happen if her equally dangerous brother escapes his imprisonment. It’s getting harder for Caiden to escape Abriss’ traps, especially when Abriss has a trump card up her sleeve, one guaranteed to slow down Caiden enough to capture him and his remarkable ship...his long lost sister.

Starting ten years after the first book, in many ways, this book is an even deeper ice bath plunge into a complex and complicated world than the first novel. The first novel had the advantage of starting in a remote region and then bringing Caiden into greater realms; here, Hansen goes for the deep end approach to big scale space opera (or epic fantasy) of immersing the reader into the setting and letting them find their footing. Hansen’s time jump of ten years, then, levels the playing field a bit for readers old and new. Readers who haven’t read Nophek Gloss and those who have loved it alike are a bit backfooted by Caiden’s new state of affairs, and what he has been up to. Also, starting small again, with him, his ship and his Nophek does start the reader at least the beginning, with a toe in the water.

This continues with the addition of the point of view of his sister, Leta, giving us a new and hitherto unseen view into Abriss’ Centre’s world of Unity, as well as a lot of technology, ideas, worldbuilding and the character of Leta herself. If the first book was an explosion of ideas and worldbuilding, this second novel ups the game right from the start, introducing Leta, her compatriots and their technology (especially the “remote controlled” Proxies)  for the reader to discover and comprehend. Although Leta was teased at the end of Nophek Gloss, having her as a full fledged character, in many ways more of a pawn than Caiden feels he is, she provides a good parallel perspective to events, especially once she intersects with her brother.  By this point, though, you have been dunked into the deep end.

Continuing on the theme of character, Caiden and Leta both go through some rapid growth, change and tests of their mettle, skill, and the drive of their beliefs. Hansen’s high octane plot, which I will speak on more in a moment, really puts the accelerator to what the siblings (although we learn that term is not quite completely accurate) must go through as they need to come to terms with each other and with the greater powers above them. Both are high wire acts...Leta’s personality and nature not only have to be established within the pages, affirmed, and then have to go through the wringer and make her character arc plausible. In a parallel vein, Hansen has Caiden have to be re-established as a 10 year older version of himself, then throw him onto the pyre of the revelation of his sister’s survival, work that relationship, work the events both wind up going through, and make his twisted and complicated and often agonizing character arc work and make sense. I felt a lot for Caiden throughout this novel, he goes through a *lot*...even as the fate of the Multiverse is partly on his shoulders. I especially loved, though, when he reunites with his found family from the first book. Caiden NEEDS his community, and this novel. Is an argument that a man cannot stay alone, forever, and thrive.  But its a hard pull to write.

In other words, when it comes to character, doing a time jump of 10 years, introducing a major new relationship and then putting both characters through the wringer is a difficult task, and Hansen pulls it off.  This is all in a matrix of, as mentioned before, dunk in the deep end of the pool of worldbuilding. There is a lot here. Space Opera universes are complicated enough, but when you have worlds and universes cheek by jowl, it amps up what you need to deliver to the reader. From Abriss Centre’s Unity all the way to the Casithen, there are a lot of worlds, places, concepts, ideas and technology to unleash. The true nature of Azura. The Proxies that Leta and her compatriots use at the behest of Abriss. The technology of the Graven that various factions in the book are trying to cobble together, use and recapture who and what they were...past informing and reflecting the shattered present. I wouldn’t say that the current multiversal world is a fallen one, mind, but there is a real feel in this book, as described and discussed, that the current state of affairs is a “fall from grace”, something the first book didn’t touch on at all. And of course, there are competing views on how and why you would want to reach for a state of the past, and we investigate that in a number of ways.

Finally, though, what makes the worldbuilding go down smooth, what makes you root for the characters and wince and clench your fists, is the visceral, immersive, and sensory driven plot and action sequences that keep the reader turning. It’s one thing to build a big world with lots of detail, lore, history, and aspects. It’s another to communicate that world to the reader on all senses, to put the reader there, to make the worldbuilding, the character beats into a framework, a narrative that makes you not only turn the pages, but keep them within the story, even when they close the book. Hansen does this with immersive, all-sensory writing that makes us feel Leta both in and out of her Proxy, for Caiden as he is desperate to rescue his sister, for the sheer way one makes a multiverse come across. Describing a universe and world is hard, a series of worlds harder, but with a setting where the rind between universes can lead to a completely different universe is difficult to make it all feel different and immersive. There is a very cool and well done “Fractured verse” feel to Hansen’s verse, and even more than the first novel, that really comes across here.

The action beats, including the physical combats really also inform the character. It may be a cliche that “action can inform character” but Hansen really does make it work here, especially in how and why and when characters will or won’t fight, as much as the “punches they throw” and the “powers they use”. None of the combats wear out their welcome, there is no punching for the sake of having characters punch each other. And the blocking and description of the combats are top notch.

While there are many “set piece” locations throughout the novel. I think the planet of Melynhon is where this is best shown and described. Melynhon is a planet on the borders between two universes, Unity, and another universe. That sort of split between two worlds makes Melynhon a key place for Abriss’ plans, and brings home to the other characters, as well as the reader, the dangers of Abriss’ plans to real people, and at the same time, show the practical effects of a universe split into a multitude of universes in an immersive way. The set piece on the planet really brings together all the virtues of what Hansen is trying to do on all axes.

The most impressive thing is that this is a middle book in a trilogy that tries new and interesting things, propels the overall narrative of the trilogy, the characters and the worldbuilding. If I have a criticism of it, I think Caiden’s shipmates do get a bit of short shrift compared to all of the new characters we get, but even for a thick book, there is only so much that the author can do in order to squeeze more character beats in for everyone. But that’s my takeaway for the book, that I have reiterated before and will reiterate again. Azura Ghost is a lot. It’s the kind of space opera that builds on the first book in the series, throws even more at you than the first book did, and has a writing style that immerses you all into the world, plot and characters. I look forward to how Hansen tries to wrap up the mystery, adventure, plot and character beats in the third novel.  More, please.

+1 for a complex and complicated Space Opera multiverse that is as widescreen as you can get.

Penalties: -1 Readers who don’t like the “drop you in the deep end” are going to find this a tougher read than even the first.