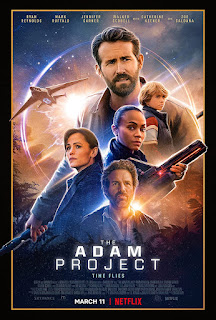 My favorite thing about Ryan Reynolds is probably his jawline. It's exquisite. Trailing that is how self-aware he is that he has an exquisite jawline, among several other physical features that I won't go into on a family-friendly website, as well as charm and charisma just... oozing (can I say oozing?), yet somehow manages to do that without coming off as egotistical.

"But you forgot the OG superhero Ryan Reynolds," you say. "What about Green Lantern, you idiot? Do you think Ryan's cheerful-yet-brooding eyes could make us forget that atrocity?"

This is the redemption arc for that. Ol' RR plays Hal Jordan Ryan Reynolds Adam Reed, a pilot in the year 2050, which we don't see much of, because we get dropped in the middle of him stealing his own time-travelling jet while under hot pursuit and makes it to 2022, which isn't where he wanted to go.

Here we meet young Ryan Adam, who, my god, is Walker Scobell a dead ringer for Ryan Reynolds, at least in his voice and delivery. So for those of you who wanted more Ryan Reynolds, you get it, in the shape of a undersized*, asthmatic** 12-year-old. It's hilarious and I love everything about it.

Before we get to the meat of what happens, I want to refer back to Reynolds knowing who he is, which is nowhere more apparent than his acting and the characters who he portrays. He also, at least publicly-facing- is very heartfelt and caring. That really shines through in his movies - I should write about Free Guy, which honestly blew me away by being a lot more than the sum of its parts. I'm not sure that happens here, but he*** takes a time-travel popcorn flick and injects it with a lot of feeling, making it about relationships and choices.

Those relationships take center stage as the second act begins. Adam lost his father 2020-ish, so young Ryan Adam and his mom are still dealing with that trauma. We shortly learn that Ryan Adam had a wife, who was also a time-travel-pilot-person (they did not give them a cool name, like chrononauts or something) and she disappeared going to 2018, which is where he is trying to go.

Those of you who can subtract see where this is going.

But, like I said, at this point, those relationships are at center stage. The film does a great job of putting our protagonists in jeopardy, without feeling heavy. I wrote in this space about the need for healthy male relationships in media, and this film does a great job with that - The two Ryans Adams relationship, as he pleads with his younger self to, basically, not be 12. His younger self gives him perspective on their father, and how he managed his grief over losing him.

Mark Ruffalo is pretty great as well, as the dad, who is also asked to examine his own priorities and values, as well as what he is going to about being potentially gifted the ability to prevent his own death. Likewise, Zoe Saldaña is excellent as Laura (uh, spoiler, she's not actually dead), and both her and older-Ryan Adam have to decide between finding and keeping a lost love, or ya know, saving humanity.

Again - still a popcorn flick. None of this is, like, Sophie's Choice or whatever, but they did a good job of taking a fairly standard formula, and doing something other than the standard love interest and leaving it at that. Plus.... Ryan Reynolds.

+1 for being tremendously heartfelt

−1 for making a big deal about the dad's jacket, and then jacket game being very weak. I care too much about jackets, I know, write your own review.

-1 for basically sticking Guardians of the Galaxy and Back to the Future in a blender. Although that could also be a positive.

*He is very normal sized

**This just kinda... goes away

***I'm not sure it's him, but it's his production company, and a thread in these movies

Dean is the author of the 3024AD series of science fiction stories (which should be on YOUR summer reading list). You can read his other ramblings and musings on a variety of topics (mostly writing) on his blog. When not holed up in his office writing, he can be found watching or playing sports, or in his natural habitat of a bookstore.