Juicy, compelling dark academia with all the backstabbing you can eat 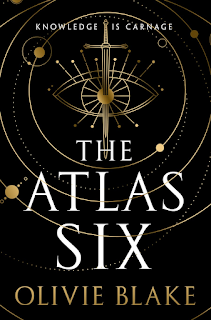 I am reliably informed, every time I see any official marketing for The Atlas Six, that it is a Tiktok sensation: an originally indie published dark academia fantasy which gathered a huge viral audience and is now receiving a traditionally published debut with all of the bells and whistles that entails. As a non Tiktok user and a crumbly old thirty-something, this marketing isn't exactly aimed at me, and my prior experiences with dark academia (both the books and the educational experience) have been mixed, to say the least. On checking out The Atlas Six, I have discovered two things to definitely be true: one, I definitely don't care for this genre full of rude, overconfident and/or anxious prodigy characters in unnecessarily toxic but ~pretty environments; and two, The Atlas Six is a very compelling book despite that. So I guess I have a new favourite series in a least favourite subgenre now. Wonderful!

The premise of The Atlas Six - which it wastes no time in setting up - is that every decade, six highly talented young adults are selected for a two year... graduate-scheme-slash-cult-initiation in the Alexandrian Society, the heirs of the Library of Alexandria and a whole bunch of other lost and hidden research. At the end of their first year, five will progress to the second year of induction, and those who become full members will join an elite group full of wealthy, prestigious individuals who exert disproportionate influence over the world's powerful institutions. The Society, led by Atlas Blakely, taps six new mages (hereafter "the kids", because although they are in fact all adults they come across as super young to this crumbly old thirty-something) with various powers and personality problems. There's Libby and Nico, who have just graduated co-valedictorian from the same magic school, with the same speciality over physical objects, and detest each other to the point where they just can't leave each other alone. Reina exerts control over plants, but she hates her natural talent and prefers to pursue historical study instead. Parisa is a telepath who uses her abilities and her sex appeal to stay on top; Callum is a manipulative empath who alters the world around him to give himself the easiest ride possible; and Tristan is a big whiny baby who can see through illusions and possibly through the entire fabric of reality. (But not through the lies of the people manipulating him! Poor Tristan.) All six have grown up in a world where magic is a rare, generally hereditary ability, but it's also known to the wider population even if magical individuals have different career paths and circles open to them. We don't get much in the way of worldbuilding for the broader magical society, or much to go on when it comes to relationships between magical and non magical folks, but The Atlas Six does enough to set itself up and make its characters feel like they have come from a real, living world.

Stuffed into a house with no directions beyond "enjoy learning, kids!", the six start to unpack the mysteries behind the Alexandria Society. An attack on their first night by a whole host of enemies who were accidentally-on-purpose allowed to breach the wards that supposedly keep it safe - because it's not a dark academia unless your school is indifferent to your death - underlines both the society's precarious position and some of the darker elements of the kids' talents. What follows includes (in descending order of importance) scheming, backstabbing, tenuous alliances and study partnerships, conversations where characters tell each other about their magic in more or less flowery metaphors, enjoyable but transactional sex, dreamwalking with half-mer best friends, life-altering sex, holidays, and actual magical study where the characters (mostly Nico and Libby, who are the only two straight out of university who apparently still remember how to study) get to push the boundaries of reality. In all seriousness, there's a significant difference in how each character uses their magic to influence their lives, and while it kind of itches to see Parisa and Callum's abilities benefit them as they try to figure shit out and survive potential elimination while other characters get less of a chance to shine, the magic really works alongside the rest of the characterisation. By the end, the only member of the six who ends up genuinely shortchanged is Reina, who doesn't get a personal arc or come to any new understanding about her powers, and whose standoffishness leaves her disconnected from the balance of power around the rest of the five. Nico and Libby's connection to each other also hampers their interconnectedness with other characters at points, and they're the only characters who maintain significant relationships outside the Society, but Libby in particular gets opportunities to connect in sometimes very unexpected ways.

To say too much about the plot beyond the set up would veer quickly into spoiler territory, but I should note that the way things develop make its characters pretty reactive most of the time, and there's long stretches where they don't have much to do beyond discuss new information and wait for the right time to act on it. The elimination mystery - which ostensibly takes up most of the characters' time - is not so much a mystery as a "who is going to lose this game of high stakes musical chairs", and while that's an interesting topic for a reader to speculate on, it doesn't lend itself to clues or opportunities for someone to piece things together before the end arrives. Instead, it's the mystery of what, exactly, The Alexandrian Society represents and what the kids haven't been told that starts to get really juicy. As the characters come to terms with the implications of joining the Alexandria Society and the danger it poses to them, and weigh that against their own ambitions and self-confidence, everything builds up to a conclusion that contains both predictable elements and at least one surprising reversal. And, because this is YA-adjacent publishing in 2022, we leave things on an enormous cliffhanger, with new enemies gearing up to take on the kids who remain in the Alexandria Society after the dust settles. Which is a problem, because I was simultaneously absolutely done with these horrible people and also would really like to know what happens to them, and apparently I have to put up with two more books to do that.

Anyway. even if you read it with a constant inner monologue of "why are you like this, stop being mean for five seconds and talk to each other", The Atlas Six is full of tension and characterisation that makes it a compelling adventure, even if I can't recommend "reading in a subgenre you dislike" as a leisure activity. And for everyone on board with the dark academia train (or looking to find out more), this book is a ride you're totally going to want to take.