A new collection of fantastical fruits of the Latin imagination 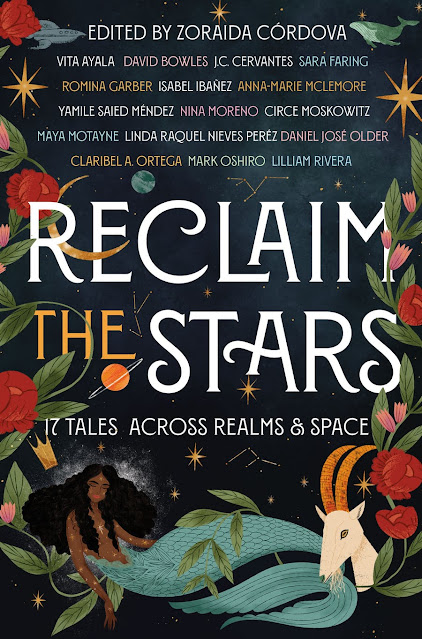 This is truly the Rainbow Age of science fiction: there's a treasure trove of global authors getting known more and more and more and more. This time, we're taking a look at Reclaim the Stars, a SFF anthology of short stories by writers of the Latinx diaspora, edited by Zoraida Córdova.

Part 1: To the Stars

The first part of this collection is about robots, spaceships, aliens, and the undying endurance of the Latin people in the far future.

Reign of Diamonds by Anna-Marie McLemore has a showstopper of an opening: "Even a princess going to her death must appear worthy of her title." Before we know what hit us, we have intergalactic royal intrigue, elemental magic battle and romantic rescue. If Romeo and Juliet taught us that the enmities between elders bring punishment upon the descendants, this sapphic retelling gives those descendants a chance to redraw the balance of power in their own terms.

Flecha by Daniel José Older boasts a no less appealing start: "How do you mourn someone who's not dead yet?" That question will morph in multiple directions by the end of this adventure that imagines a duo like Han Solo and Chewbacca flying through the galaxy in their smuggler ship, except this Han Solo is Cuban and worships the Yoruba hunter god Ochosi, this Chewbacca is an outcast from her people, and they don't embark on a heroic mission for money, but for justice.

The First Day of Us by David Bowles is a formally daring text, with its double-addressee second-person narration and its multiple flashback structure, but it's hard to find cohesion between theme and setting. At its core, what this story presents us is the cherished memory of a sweet moment when a relationship was forged, but the rest of the plot elements are so tangential that it may as well have happened in our time. There's no indication of why this story needed to be science fiction at all.

The Tin Man by Lilliam Rivera has an intriguing start and a disappointing ending. The protagonist is a lonely survivor of a plague that forced everyone to leave Earth; one day, a robot comes visiting, offering a way out of the desolate ruins. That could have been an interesting premise, but the narration's tone is too light for the situation (including such embarrassing lines as "This is a horrible dream where my own private dystopia has transformed into a science fiction slash horror documentary"), and a pivotal action scene near the ending is written without enough spatial detail, leaving the reader confused.

This Is Our Manifesto by Mark Oshiro is, literally, more a manifesto than an actual story, with endless paragraphs of some unnamed character's opinions that lead to a short bit of predictable action at the end. What little plot actually happens has already been resolved before the text starts, which removes all the tension. This is a tiresomely unoriginal entry that recycles every prison dystopia cliché from every prison dystopia that exists.

The second section is all about magical realism, so it covers those scenarios where the supernatural blends into the real.

Creatures of Kings by Circe Moskowitz is your standard half-demon offspring tale, which means you have the secretive mother, the outcast teenager, and mandatory half-sibling drama. No surprises there. But on top of being the trillionth fantasy story to uncritically reinforce monarchist tropes, this one also has a scene that depicts suicide under a joyful light, which earns it a big NOPE from me. Although the protagonist displays some semblance of a moral backbone, that doesn't prevent her from doing exactly what the plot expects of her, which the narration literally spells out: "It is no longer a choice. It is what happens when fates are forged." That is always the least interesting way to resolve a story.

Eterno by J. C. Cervantes is nothing short of a gem. In the short space available, the author invents an entirely new mythology and magical system, complete with compelling backstory and rival agendas. It's hard to properly summarize this sibling drama between three sort-of-but-not-exactly Grim Reapers. One could try to describe it as the forbidden love of an immortal for a human, ending in a heroic sacrifice for the human's sake, but that would not do justice to the depth and complexity that this story can deliver. It truly has to be experienced.

White Water, Blue Ocean by Linda Raquel Nieves Pérez is a bittersweet metaphor about the cost of truth and the more insidious cost of keeping appearances. In a family cursed with enforced sincerity, a young grandchild struggling to reclaim their own truth makes the case that oppenness doesn't have to be seen as a threat.

Leyenda by Romina Garber is a magical school story about systemic sexism. While the worldbuilding has some points of undeniable interest, the author doesn't quite capture the voice of the teenage characters and ends up making everyone sound petty and immature. The interpersonal melodrama goes over the top and the resolution is a textbook deus ex machina.

Color-Coded by Maya Motayne also suffers from a too neat, too unearned ending, but it at least manages to make the old premise of puberty-as-superpowers feel somewhat fresh.

Magical Offerings by Nina Moreno is the curious case of a portal fantasy that happens entirely on this side of the portal without losing the otherworldly eeriness. The protagonist, a teenage witch with a talent for jumping into trouble, is sent to live with her grandfather as part punishment and part desperate last resort, but what she finds in his junkyard is her own form of freedom. You can't blink or you'll miss how effortlessly this story transitions from family psychodrama to Frankenstein horror to Southern gothic to happily ever after.

Part 3: Other Times, Other Realms

The final third of the collection explores the multiplicity of worlds where the Latin people have existed, or might exist.

Rogue Enchantments by Isabel Ibañez is a lovely mystery around magical shops, with an earnest, good-hearted protagonist you instantly root for, and a clear sense of worldbuilding that lends solidity to the story. I always appreciate a text that makes good use of its short space to suggest a wider setting you can intuit beyond the events on the page. Here a crafter of magical painting supplies is the target of business envy and sabotage, but her creativity and honesty save the day. The plot points at the ending are a bit less surprising than they should be, but this is still a wonderful tale.

Sumaiko y la Sirena by Vita Ayala loses no time in painting a chilling image of life in a slaveholding plantation. This serves to create a persistent air of threat that lingers even over the few scenes of joy that the protagonist, a mermaid foundling, gets to have in the middle of her daily horror. Her quest to return to her home under the sea is punctuated by moments of genuine sweetness, although I must confess I'm not sure how to feel about a slavery story where only the designated protagonist gets to magically escape the slavery. It's interesting that the final paragraph seems to address that point, by jumping to the present time and deliberately pulling the reader's attention to the mermaids that still play in the ocean next to the spot where the plantation no longer stands. I'm not sure how effective that device is as a symbol for victory, but it's a credit to the story that it leaves this kind of questions in my mind for quite long after my reading.

River People by Yamile Saied Méndez is a web of oppositions: the will of mortals against the will of spirits, the faith of white Europe against the faith of Latin America, honorability against necessity, brother against sister. This story follows a generation of Irish immigrants in Argentina and centers on the daughter, who can hear the voice of the river and tries to save her family's livelihood from a deal with the devil. Even though the writing in the dialogues feels unpolished at times, what makes this story truly special is that, instead of the standard European model of religious fantasy, the central obstacle isn't even the devil, and it is not resolved with confrontation or sacrifice, but with empathy and openness.

Moonglow by Sara Faring is a revenge fantasy written in the form of private diary notes kept in the protagonist's head. This narrative choice acquires a foreboding resonance when the reader learns that this protagonist has become pregnant with her own stories, which means that the tale you're reading is, in a way, alive too.

Killing El Chivo by Claribel A. Ortega is a fantastical retelling of the plot to overthrow Dominican dictator Rafael Trujillo. But instead of clandestine fighters learning to shoot rifles, we follow clandestine witches learning to focus their emotions into a blast of lethal energy. The juxtaposition of folk horror with political horror is particularly powerful here, and the real-world parallel with the heroic martyrdom of the Mirabal sisters elevates the story to the level of national epic. This is by far the best entry in the collection.

Tame the Wicked Night by Zoraida Córdova is a fairy tale about a monster-slaying quest that turns into a Freudian fever dream brimming with fertility symbolism: a dark cave in a mountain standing in for femininity, a goat with an insatiable appetite standing in for masculinity, and a protagonist blessed with the gift of making the earth sprout life. With all this loud subtext, it's only fitting that the author chose a metaphor for pregnancy as the shining miracle that restores the world.

Overall, the selection of stories in Reclaim the Stars leaves a pleasant aftertaste. The first two parts have, regrettably, a rather mixed quality, but the final section is pure excellence.