Microreview: The Aurora Cycle by Amie Kaufman and Jay Kristoff 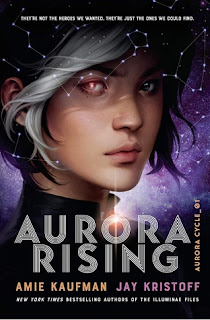 After throwing shade at Jay Kristoff in my very first review for Nerds of a Feather, it seemed only fair that I offer a more measured take on one of his works. The Aurora Cycle is one of his less controversial works, perhaps because it was co-authored with Amie Kaufman.

The trilogy begins with Aurora Rising.  On the eve of graduating from training as an intergalactic peacekeeper, Aurora Academy's top student, Tyler Jones, can't sleep. When he heads out for a little flight time to settle his nerves, he comes across a survivor in a space wreck over two centuries old. Of course, he does the noble thing and rescues her, but it costs him his first-draft pick of squad members. He's left with the dregs of the Academy, who he must somehow whip into a coherent crew in time for their first proper mission. What should be a straightforward delivery of humanitarian aid turns out to be more complicated than expected, first by the political situation, and second by the rescuee who stows away onboard. When Aurora Jie-Lin O'Malley begins to display strange powers, Tyler and Squad 312 realise that she may be the key to uncovering a new threat to the galaxy.

Kaufman and Kristoff's first series The Illuminae Files, made them the darlings of Australian YA thanks to their blend of epic action, horror and romance. For the Aurora Cycle, they tone down the horror and amp up the space opera while still maintaining a nice blend of action and romance.

The story is told from multiple first-person perspectives, allowing each member of Squad 312 (and Aurora) some time in the spotlight. For books two and three, humorous recaps are given by Magellan, Aurora's uniglass/pocket computer, a lifeline I always deeply appreciated.

The cast is reasonably diverse across a number of axes, albeit in ways that tend to be quite surface level. Aurora has Chinese heritage, with a few very minor nods to the culture throughout the trilogy. Zila, the squad's science specialist, is Black but seems devoid of any Black cultural elements. This contrasts awkwardly with the two alien species on the squad, whose culture tends to be foregrounded. This is particularly the case with Kal, the resident space elf. 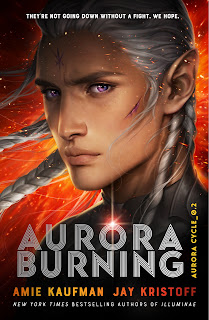 Similarly, a couple of members of the squad are not heterosexual, but the one same-sex relationship that develops takes place largely offscreen while the remainder of the squad get paired up like they're heading for Noah's Ark. There's a same-sex kiss that is played for comedy and some interpersonal dynamics that verge on queerbaiting. Characters from beyond the gender binary didn't seem to exist. On the whole, I found the queer representation rather disappointing, despite it being a step up from the authors' previous work.

Lastly, Finian, the squad's gearhead, is disabled, largely relying on a powered suit to get around. Of the diversity portrayed, this was perhaps handled the best (though I am perhaps not best qualified to judge). He is never left helpless and there are many times when we get to see him as confident and capable. We also get to see how Finn's disability challenges him, and how he needs to be accommodated, without it ever side-lining him from an action-packed adventure.

And what an adventure it is. Space battles? Check. Bank heist? Check. Infiltrating a masquerade ball? Check. Caught in a time loop? Check. Space walks on ship wrecks? Check. Escape from captivity? Check, check, check. The pacing is brisk, but allows for quiet moments of character- and relationship-building. It sucked me in and kept me turning the pages.

On that note, I have a ethical responsibility to mention that Aurora Burning, the second book in the series, ends on a terrible cliffhanger, so if the series sounds like your jam it's best to have the whole lot handy, if possible (the problem with reading them as they come out is having to wait an entire year to find out what happens. Fortunately, Aurora's End was released in November 2021 and the trilogy is now complete -- no waiting around).

The plot is a little wobbly in places. Unlike many YA books, it offers a fig leaf as to why the characters are so young (something, something, cumulative impact of space travel on the mind, something). The relationships are built well with clear arcs and moments of connection. The twists are a bit hit and miss. The ending to Aurora Rising bore some striking similarities to Kristoff's series LIFEL1K3 published around the same year, making it feel rather predictable. I also wasn't sold on a few of the changes of heart that were necessary for the ending of the Aurora Cycle. These tended to be big on feelings, not so much on logic; style over substance. Speaking of style, that has always been a strength of the authors. Their debut trilogy, The Illuminae Files, was framed as ephemera such as military reports and diary entries. It utilised some experimental formatting to create and emphasise parts of the story to excellent effect. In the Aurora Cycle, they have mostly eschewed the ephemera in favour of first-person narration, though each book is broken into parts that begin with an informative Wikipedia-style entry from Magellan. The stylistic quirks have also been pared back, though they crop up a bit more at the end of the series to emphasise the chaotic and fragmented nature of events. Style also used in a more subtle way to distinguish between narrating characters. For example, Zila's chapters tend to be quite short, sometimes no more than a page, in keeping with her direct personality and implied neurodivergence. Plus no space opera is complete without some dramatic scenery and action sequences. And while I may grump about heteronormativity, the authors certainly know how to write a good kiss.

Even though the books can feel a bit lightweight sometimes, they did offer a few things to chew on. The use of the fated mate or red string of fate trope -- perhaps more common in the romance genre, but certainly not unheard of in YA -- came up a couple of times, offering some contrasting examples. Being a romance trope, it's often viewed as romantic. However, the authors pushed back on this idea by having this be an unwelcome development for almost all the characters that experience it. While it develops into a beautiful relationship for some of the characters, that's not shown to be a universal experience, even developing into abusive relationships in other cases and thus not something to be idealised. It also tied in nicely with the trilogy's examination of the places where violence, love and consent intersect.

Bonuses: +1 for skilled use of style, +1 for fun action adventure

Penalties: -1 for a general lack of depth