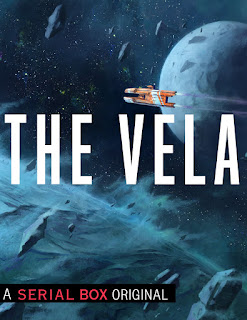 The Vela, the latest exercise in collaborative serialised fiction from Serial Box, brings together an all-star quartet of science fiction writers: Yoon Ha Lee, creator of the mindbending mathemagical Hexarchate series; Becky Chambers, who brought the best kind of slice-of-life into space with the Wayfarers series; Rivers Solomon, Campbell nominee and creator of An Unkindness of Ghosts; and S.L Huang, whose action-packed Cas Russell series is being republished by Tor after an initial self-published run. Together, they take on a space opera that touches on the strengths of all four of these works, while being something very different. Welcome to the system home to Khayyam, Gan-de and Hypatia, where the careless extraction of hydrogen by wealthy inner planets is causing the slow collapse of the sun and the death, over centuries, of all inhabitable worlds - beginning, of course, with the blameless, impoverished outer worlds. Mix in a hardened soldier-for-hire who is herself an escapee from the dying worlds, and her naive non-binary sidekick, and you've got an indisputable recipe for success, right?

Pretty much. The Vela is written to be read in short novella-sized chunks over a period of time (although I managed to devour most of it in one sitting without losing interest) and the pattern of tension and plotting that goes with that style makes for a compelling, twisty experience that is more reminiscent of good quality TV than conventional literature. This should come as no surprise to anyone familiar with the model - Serial Box releases its titles in "seasons" for a reason - but it's still an initial adjustment when reading, and those new to the format might have to experiment a little with how best to engage. The plot kicks off with Asala Sikou, the aforementioned refugee soldier, who is brought in by the leader of the wealthy, still-comfortable world of Khayyam to take on an unusual mission: locate the Vela, a ship carrying the last refugees from the latest world on the system's outskirts to have become uninhabitable, and do it with his child, Niko, in tow. Given that the slow extinction crisis has produced a ton of ships full of refugees, the mission to find one particular set of them is odd from the outset, but it soon becomes clear that this is more than a token gesture for a politician's election campaign. Khayyam is not the only political force interested in the Vela and what it carries, and soon the militaristic leader of Gan-De - the closed-off world closest to the refugees - and rebels from the barely-habitable orbiting stations which said refugees are forced into are all involved in a struggle for the system's already tenuous future.

As you'd expect, what follows is a mixture of fast-paced action, fundamentally irreconcilable political showdowns, and some highly entertaining twists and reversals, as Asala and Niko find their way in and out of trouble, make their way across the system, and uncover the true reasons behind the Vela's importance and what it means for their future. The lead pair have a great dynamic and there's plenty of other interesting characters too, representing a diverse, ethically messy version of humanity which contrasts individual capacity for kindness with a hopeless lack of positive collective action. The cultural differences between the different worlds are understated compared to the inequality and political tensions between them, but the touches are there to make these worlds feel lived in. The text also uses its science fictional elements to underscore the sense of inequality between the haves and the have-nots: interplanetary travel is technically accessible to most, but for ordinary people it depends on once-a-decade planetary alignments which allow ships to use gravity rather than burning expensive fuel; only the very wealthy can afford to transport themselves directly under normal circumstances.

In its treatment of interplanetary politics, there's a strong comparison to be drawn between The Vela and The Expanse, which takes place on a similar scale and with similar questions about privilege and inequality. Indeed, while I'm a big fan of The Expanse's current trajectory, The Vela comes stronger out of the gate with its political machinations and its representation, in contrast to the somewhat less inspiring "hardboiled bros in space" feel of Leviathan Wakes. Like The Expanse, The Vela manages to satisfyingly balance the sense of huge, irreconcilable political realities that the refugee crisis is creating, which is beyond the power of Gan-de and Khayyam to solve, and the individual personalities at the helm of some of those forces. I do enjoy stories which push hard on the tension between "good people" and "people working towards good things" (some of whom are terrible), and there's plenty of that here without descending into outright misanthropy.

That said, there were times when I was expecting a little more from The Vela, in terms of its plot and characterisation. In particular, I was frustrated by the tight focus on a few, relatively privileged characters. Asala's presence as the main character should, of course, be the counterweight to that, but despite the exploration of her past as a refugee, her characterisation is strongly shaped by an early display of indifference towards a ship of illegal refugees, which underlines the position of power that she has reached in a way that makes it uncomfortable to view her as representative of the powerless masses at the heart of The Vela's universe. Other than Asala, and a couple of characters who turn up in individual chapters, ordinary people are seen only in nameless glimpses, and that feels like an odd decision for the authors to make in a story of this kind. Additionally, while there's a cracking couple of climactic chapters here, which really blow the possibilities for future instalments wide open, the closing moments of the story leave things on a frustratingly massive end-of-season cliffhanger, and I'm already nervous about the lack of announcement for a sequel. There is enough thematic closure to still make this season a satisfying investment on its own, however, and if you're bothered by excessive cliffhangers then Serial Box's model may not be the one for you anyway.

All in all, The Vela has got a lot going for it, and I do want to take a moment to appreciate the fact that a space opera collectively written by an author team that is mostly queer and mostly people of colour not only exists, but is being published as a headline event with an objectively all-star creative team. If I'm being truly honest, I have to admit I'm a victim of my own high expectations for this title: I feel like this team could produce an Indisputable Best Book Of The Year for me, which this doesn't quite live up to despite its strengths. However, taken with realistic expectations, The Vela is a wonderful adventure, and this is, I hope, just the start of our adventures with Asala, Niko and their broken, beautiful world. I'll definitely be signing up for future instalments.

Penalties: -1 A frustratingly elite cast for a story based on a refugee crisis.