Review: A History of What Comes Next 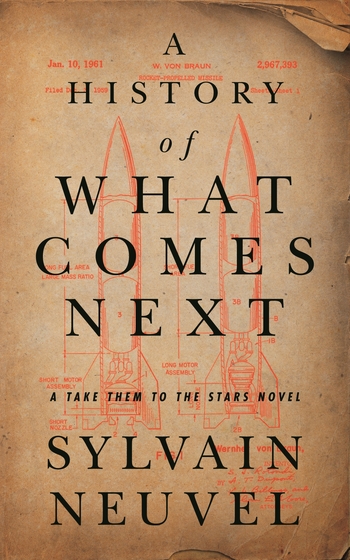 Since before recorded history, a hand has been guiding our growth. A hand covered in blood. The Kibsu, a secretive family of women belonging to a not-quite-human lineage that reproduces via gynogenesis, have been cleverly manipulating the right people and intervening at the right moments to steer scientific advancement toward the space age. They've always been at the center of progress yet staying under the radar. They've given us their knowledge and eschewed the spotlight. Their mission is to take us to the stars, but their actual reasons are lost to time, and those who have gotten too close to the truth have invariably met with a gruesome death.

A History of What Comes Next by Sylvain Neuvel follows the early years of the Cold War space race from the alternating perspectives of Sarah, the 98th daughter of the Kibsu, and Mia, the 99th. Like all their mothers before them, they are spies, schemers, geniuses, fugitives, survivors, killers. They follow a strict list of rules to maintain their hidden influence on world affairs while avoiding detection, because a mysterious enemy, which they only know as the Tracker, has spent as many centuries chasing their bloodline as the Kibsu have been pulling the strings of human development. At times, the Tracker has been dangerously close to ending their mission. Now both the United States and the Soviet Union are obsessed with grabbing the knowledge (and the engineers) behind the Nazi V2 rocket, and the Kibsu need to be even more careful to not invite too much attention as they give us the last push into space.

If this had been written as a uchronia, the plot would have been attractive enough. But Neuvel makes the deliberate effort to not stray beyond the facts, which places the novel in the more challenging genre of secret history. An extended note at the end of the book reveals in stunning detail how much care Neuvel took to make every one of his plot points match with reality, including little-known stories that the casual reader might have taken as fantastical but are supported by the written record. This choice of inserting the Kibsu in the lives of real historical figures instead of making up fictional incidents enhances for us the uncanny sense of being watched from the shadows. Neuvel didn't need to add to history: the Kibsu have always been here.

That's a lot of history to cover, but the first-person narration keeps the focus on the Kibsu's mission. The thrill of this book is to watch the protagonists' minds as they assess the scene and improvise tactics and escape routes in the heat of the moment and even interrupt their own thoughts to react to sudden threats. Sarah and Mia are every bit as patient planners as they are expert fighters, and the combat scenes are written with just the right note of immediacy without letting go of the reader's hand. This gives us a more complete sense of who these protagonists are. Even while gently nudging humankind toward greatness, they don't hesitate to remove those who get in their way, and this adds an interesting layer of characterization: are we supposed to cheer for their success or fear why they're seeking it?

Sarah and Mia lead a breathless life, constantly changing countries and names and jobs while weaving their network of contacts near the seats of power. However, at several points in the novel they pause to comment on the human character and weigh their duties versus our merits. Every woman of the Kibsu has forced onto her daughter a legacy and an obligation that she doesn't fully understand, but that is all each of them has left of her own mother, and that has become all they define themselves by. At each step in the chain of generations, the question resurfaces of how much right they have to condemn their daughters to an endless race for survival they didn't choose. They have very little information on why their mission started all those centuries ago, and after witnessing the carnage of the world wars, they're starting to have doubts on whether we're worth helping, especially now that they're getting their hands dirty by working with Nazi scientists and helping them emigrate to the new Cold War superpowers. Through all this, they have to navigate the patriarchal maze of government and academia and stay ahead of the deadly Tracker, who is getting closer on their trail.

A handful of standalone chapters tell us that the Kibsu have tried many times to put down roots and have a normal life, but it always ends in disaster. The mere fact that their daughters are identical clones arises enough suspicion, but what truly sets them apart is their intellect and their combat reflexes. Humans are helpless simpletons compared to them, and the Tracker is never far behind. The price they pay for bringing this planet to the stars is that they don't get a moment's rest, and they don't even know why. All they have is the rules handed down from mother to daughter, and a strange stone they wear as a necklace. There is more to that stone than they suspect, but after the revelations in store for us, we still have much left to know.

A History of What Comes Next invites the reader to reassess what they think they know about human potential, ancient legend, and the role of women in science. History books only contain so many names; there were countless more who contributed to the advancement of civilization and were forgotten. Neuvel suggests that some of them chose to be forgotten, and could have easily taken over if they had so wished. The enigma of the Kibsu will surely be unveiled in future entries of the Take Them to the Stars series, but this first glimpse of the world Neuvel has created offers a great foretaste of what's coming.

Baseline Assessment: 8/10 well worth your time and attention.

Bonuses: +2 for meticulous research that lets the author play within the limits of established history (I'm a sucker for stories where the limits are part of the fun), +1 for achieving the elusive balance of including the right amount of revelations in the first entry in a series while leaving enough unsaid that the reader yearns to learn more.

Penalties: −2 for stretching credulity. Migration to and from the Soviet Union, settling abroad under fake names and finding a government job on short notice are extremely delicate operations that the novel appears to consider not worth explaining. We're expected to believe our super-capable protagonists can just move anywhere and get in contact with anyone, even across the paranoid borders of the Cold War, but for us to believe those amazing feats, we need to watch them get done.

Nerd Coefficient: 9/10 standout in its category.

Reference: Neuvel, Sylvain. A History of What Comes Next [Penguin Books, 2021].