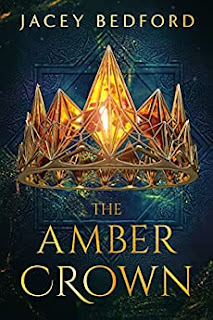 Valdas, Mirza and Lind are all having very bad days.  Valdas is the Captain of the Guard in the Kingdom of Zavonia, a Kingdom roughly analogous to Poland-Lithuania in our own world. The Captain of the Guard is fingered when the King is assassinated. He finds himself on the run, but also bound and determined to deal with the usurper and help restore the true King, even as he is hunted for a crime he did not commit.  Lind, on the other hand, *IS* the assassin. Sure, it was just a job, but Lind finds it hard to just cash his payday and walk away when he finds his mysterious employer has yet more work for him to do. And then there is the fact that he winds up on the run with the late King’s Queen, who most certainly has a target on her back because she is pregnant.  And then there is Mirza, a Landstrider (think Romany) witch who has more magic than her mentor, more magic than she herself understands or accepts.

The intersection of these three stories, in a kingdom under pressure, is the heart of The Amber Crown by Jacey Bedford.

The heart of the story, even as it of a titular Crown, who holds it and the fate of a kingdom is the aforementioned characters. While at times I could have wished for a break in viewpoint from the three of them , together they form a cohesive view of the events of the fall of a King and the turbulent aftermath that the characters are swept in. Valdas, Mirza and Lind separately have compelling stories with strong links to secondary characters, giving us a good sense of who and what they are. Valdas is the easiest, as he is the most outwardly traditional protagonist in a fantasy story, a Guard Captain wrongly accused and on the run. Forthright, loyal, determined, he at first might sound like too much of a inhuman paragon, without a hook for a reader to get to know him.  And yet, Bedford leavens what could be a paladinic archetype with making him lusty and life living. We first meet Valdas in the company of a favorite sex worker when he learns of the death of the King and his wrongly fingered place in that death. The novel keeps this theme. Valdas, for being an upright sort, appreciates the fairer gender.

Sex and its relationship to the main characters is something that Bedford carries on to the other pair of protagonists as well. Next up is Mirza, the Landstrider witch. With a birthmark, and the fact that she IS a witch, her bed is a cold and solitary one. This is a part of the constellation of her life (Just like with Valdas) but Mirza’s drive to be accepted as part of her people, power, face and all motivates her. Her relationship with the spirit world and her abilities (and more abilities that we see as the narrative progresses) shapes her as a magic user “in training” in a sense, growing into power and ability that she doesn’t quite understand and is quite right to fear on many levels.

And then there is Lind. It’s a brassy choice, putting the murderer of the King as one of our viewpoint characters and making him sympathetic to boot. It’s not just that he was the “instrument” and not personally antagonistic to the dead monarch that gives us a crack of sympathy to come and get to know Lind, but it is seeing him in his guises, his places and his interactions with the fleeing Queen that humanize and bring him to the equal of Mirza and Valda in the reader’s esteem. The other facet to his personality is the revelation of his past, what he has suffered and how it has warped him and it does involve sex, and it is a very tricky subject and Lind a tricky subject for Bedford to tackle in the character. Lind’s backstory realistically comes with a content warning.

There are an assortment of secondary characters as well. I particularly like Aniela, the aforementioned Favorite of Valdas, who, to quote the song “has a body for business and a head for sin”, and Dahnay, a member of the Tsarina’s court who joins the trio on their quest to find the missing pregnant Queen. I wanted to know a lot more about Dahnay and their origins, and just HOW she wound up thousands of miles away from their origin and serving the Tsarina. That’s a story to be told! These characters come to life and help enliven the trio at the same time.

Let’s talk about the World that Jacey has created, because, frankly, this was a bit of a mixed bag for me. Let’s start with the good. I’ve long railed about fantasy being dominated by the “Great Wall of Europe” and by that, it’s often Western Europe that gets the most play and is definitely the “Default” template for a lot of European fantasy. There are exceptions of course, fantasies that draw on Spain, or Italy for example, or Germany.  Bedford, though, decides to go a little further afield than that, and sets her kingdom as a fictional version of Lithuania. This provides a lot of potential meaty worldbuilding for the reader, with customs and language inspired by a part of Europe that doesn’t find its way into American fantasy all that often. I can think of maybe two novels I’ve read besides this one that has any reference to the Baltic thunder god Perkunas, for example. There is no map, but the geography as presented in the novel, an alternate version of our own, is clear and straightforward enough to follow the action and where the characters are going, and why. The kingdoms that border Zavonia are also cognates/alternate versions of kingdoms and states contemporary with the situation in our own Medieval Europe. Ruthenia, for example, is very clearly Russia, complete with a Tsar. Kassubia appears to be Poland, Sverija looks like its the cognate of Sweden, and so forth.

There are some good ideas about medieval economics, and economy and how people ranging from Kings to sex workers get on and live day by day. Bedford spends a fair amount of time on how the change in regime has upset a lot of applecarts, and given that she has three characters “on the run”, we get to see the ground level of how policy by Kings affect the ordinary person. And in general, this is a very lived in and day to day sort of novel. Even with a Captain of the Guard (former) as one of the characters, this is a novel that doesn’t have the characters near the levers and anchors of power for most of the novel, and so we just see ground level effect of decisions of the high and mighty.

And then there is the magic. Bedford has a couple of “systems of magic” but she takes a middle ground between Magic as a Science and Magic as a completely mysterious force that cannot be harnessed. Mirza knows some things, learns some more things outside of her “Tradition” and we see the antagonist, once revealed, use different magic entirely. This is a world where there is no one unified theory of magic and how it works, and the intersection of magic types and forces can be quite messy and complicated and not at all clear. I do and did appreciate that even with a witch as a main character, magic is an unpredictable and sometimes dangerous tool--reminding me particularly of Barbara Hambly’s Dragonsbane in this regard. (this would make Mirza reminiscent of Jenny Waynest, another “half-trained witch”)

For me, though, all of this excellent and deep and immersive worldbuilding came at odds with something that, for me, threw me out of the story, and that is using the shorthand of inconsistently adding some real European places. With a novel based on a fantasy alternate Europe, following the cognates and how Bedford remixes European kingdoms and locations is most excellent.  For this taking place in an alternate Europe, it is a region of Europe that is definitely the road less traveled.  So, if you are familiar with record players and vinyl records, the intrusion of real world European places mentioned in the narrative hit me like the dropping of a needle onto a record. It was discordant, in a world with Zanovia, Kassubia, Ruthenia, etc, to have mentions of Paris and Rome. While I certainly understand the shorthand of using Paris as a beacon of culture or Rome for its spiritual and religious importance, but for me, once you’ve decided to do an alternate Europe, mixing fictional polities and places with real ones does not mix well, because for me, it diminishes the immersion into the secondary world that Bedford is creating.

One final note that readers will want to know and perhaps appreciate is that this is a complete story in one volume. Even given my misgivings about the mixture of real Europe and Alternate Europe places in the novel, this is a rich and interesting world that a reader can find themselves lost in, and there would certainly be plenty of more stories, with different characters perhaps, that Bedford could tell if she so wished--but the story of Mirza, Lind and Valdas come to satisfactory conclusions and the book can be closed on their stories crisply told in one volume.

Bonuses: +1 for a strong trio of viewpoint characters, fully realized.

+1 for very interesting ideas regarding Magic and general worldbuilding, especially from perspectives not always expressed in fantasy novels.

Penalties: -1 the mixture of real Europe and fictional Europe places feels really discordant to me and eroded my sense of immersion to the world.