Microreview [book]: Where the Drowned Girls Go, by Seanan McGuire

The latest entry in a series that has ripped and stabbed and warmed my heart all in equal measure. 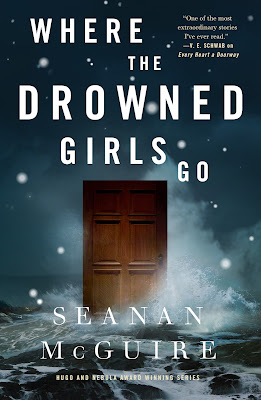 When I wrote about Every Heart a Doorway six years ago, I wrote about how reading that story is like coming home and that it was very much a novel of my heart. With very limited exceptions, I have loved the five subsequent novellas with most of my heart though nothing has quite captured to the level of that first discovery of the doorways and what they mean. Seanan McGuire’s treatment of portal fantasy and child heroes and requests to “Be Sure” have ripped and stabbed and warmed my heart all in equal measures.

These are stories of children finding their way to doors to magical worlds where they could be heroes and where they might fit in better than they do in their “real” lives and their “real” families. Those magical worlds are seldom actually kind, but the children find spaces where they can be heroes. Not all the children actually come home, but the ones that do find it difficult to adjust and their families seldom understand at all. That’s where schools like Eleanor West’s Home for Wayward Children come in because Eleanor West knows the doors are real and knows these kids need an opportunity to be truly understood and hope that their doors might still open for them again.

Eleanor West’s is not the only such school, and that’s where Where the Drowned Girls Go comes in. We first met Cora in Beneath the Sugar Sky after she returned to the real world from “The Trenches”, a world where she had been a mermaid and a hero, “bright and brave and beloved”. Beneath the Sugar Sky was an adventure story hopping across multiple worlds and Cora’s story continued as part of a larger story in Come Tumbling Down. Where the Drowned Girls Go deals with the consequences of Cora being a hero.

When Cora helped set the stories of Jack and Jill right in Come Tumbling Down, she met the drowned gods in The Moors and those gods met Cora and they want her back even though she was never theirs to begin with. Even after returning to Eleanor West’s, Cora can still hear their call and she really, really needs to not. Where the Drowned Girls Go is a story of trauma recovery and friendship and more.

Most of it takes place at the Whitethorn Institution, a sister school to Eleanor West’s, a school where they “help” the children forget. It is, in many ways, a mirror to Eleanor West’s and it is very much not a welcoming school but Cora thinks that a change is what she needs to help silence those gods in her head. But Cora is still a hero and things are perhaps not right at the Whitethorn Institution.

Where the Drowned Girls is a remarkable novella. It simultaneously continues specific storylines begun in several of the previous books (including, surprisingly, Across the Green Grass Fields), tells a very specific story for Cora, introduces a whole new school, and quite possibly (and likely) sets up future paths for the Wayward Children to go in future novellas. If I’ve learned nothing else from reading and re-reading Seanan McGuire it is that she doesn’t capriciously introduce things into her stories and something as big and significant as The Whitethorn Institution is absolutely going to come into play again in significant ways. Trust me on that.

I would need to go back and read all of the Wayward Children novellas to be sure (something I might do anyway), but Where the Drowned Girls Go may well be one of my favorite stories of the series, second only to Every Heart a Doorway, though that could be a bit of recency bias. It’s not that any of the Wayward Children novellas are especially soft or kind to their characters, but Where the Drowned Girls Go is even less so. The Whitethorn Institution is especially harsh, even before you look underneath the surface. But, even so - this story of consequence and discovery is exceptional. It is the perfect encapsulation of the series thus far and sets up the future quite deftly.

Bonuses: +1 for McGuire's wit and wisdom

Joe Sherry - Co-editor of Nerds of a Feather, Hugo Award Winner for Best Fanzine. Minnesotan. He / Him
Posted by Joe at 12:00:00 AM