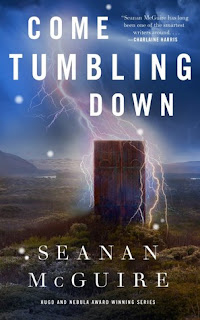 Over the last two years I've been working my way through as much of Seanan McGuire's work as I could pour directly into my brain and I've been thinking about how McGuire uses the idea of a hero. October Daye refers to herself as a hero, but in those novels, in faerie it appears to be more of a job title than something that an individual is called for a particular act. It's a way of life. It's part of a person's identity.


Eleanor West's Home for Wayward Children was an island of misfit toys, a place to put the unfinished stories and the broken wanderers who could butcher a deer and string a bow but no longer remembered what to do with indoor plumbing. It was also, more importantly, a holding pen for heroes. Whatever they might have been when they'd been cast out of their chosen homes, they'd been heroes once, each in their own ways. And they did not forget.

As much as any of the previous four Wayward Children novellas, Come Tumbling Down is a story about identity. That's something that has been baked into the series from the opening pages of Every Heart a Doorway (my review). It's the idea that sometimes children just don't fit into the lives their parents and families and communities seem to have mapped out for them, and when there is no balance to be struck and no understanding of who those children really are - sometimes they find their way to worlds where they truly belong. The places those children find in each of their worlds is so deeply personal, but for many of those children one common thread is that they become heroes of those worlds.

That's an idea that seems to carry across McGuire's fiction - that heroes are real and that they are necessary and important. There's a wider conversation to be had about how Seanan McGuire writes heroes as a formal concept, and the Wayward Children novellas fit very neatly into the middle of that conversation, but what I want to think about here is how that idea of heroism ties into how McGuire handles identity. These children have had the opportunity to become who they truly are and whether they are in the worlds which they belong or the world which we know, they will never let go of that identity and heroism is fully intertwined with that.

Come Tumbling Down gives a fairly strong hint what the novella will be about just from the title - McGuire is revisiting Jack and Jill (last featured in Down Among the Sticks and Bones (my review)) with a return to the Moors when Jack needs help getting her body back from the vampire master. It's complicated.

In some of the previous Wayward Children volumes, Seanan McGuire has played with the idea of portal fantasy and the unexpected consequences of traveling between worlds as children and finding a true place in a world even if it isn't the one born into. Come Tumbling Down is straight up a quest fantasy with some of the other children at Eleanor West's helping Jack recover her body and stop the Master from resurrecting Jill.

Seanan McGuire is a master storyteller and infuses her fiction with so much truth and pathos that even when her stories are fully fantastical and pushing into the absurd, the stories ring true in all of the ways that actually matter.


And really, that was her true gift to them: she taught them how to keep hoping in the face of a world that told them their memories were delusions, their lived experiences were lies, and their dreams were never going to come true. Perhaps that was her secret for engendering loyalty in a student body that was otherwise disinclined to trust adults, listen to them, or answer when they called. She believed.

The fifth Wayward Children novella is not where readers should begin with this series. Even as McGuire tells distinct stories with each novella, they build off of each other. Every Heart a Doorway and Down Among the Sticks and Bones are the true antecedents, but there's more character development for the adventure party in Beneath the Sugar Sky. A new reader can enjoy Come Tumbling Down as an introduction to Wayward Children, but there is so much richness and color to be had by reading the series in order.

Readers who have been following along know what to expect, which is simply a whole lot of excellence and joy in the midst of terror. New readers are in for a treat.


This is a horror movie," she said, in a dreamy thoughtful tone. "Did you know? We walked into a horror movie on purpose, and not everybody makes it out alive

Baseline Score: 8/10
Bonuses: +1 for the small character moments that mean so much
Penalties: -1 because even though this is a combination of Jack's story + the adventure quest, revisiting Jack and Jill wasn't nearly as satisfying as our first trip to this world.