Nanoreviews: Scales and Sensibility, The Bone Shard Emperor, Velvet Was the Night 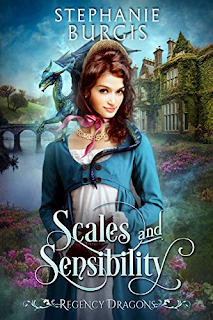 Scales and Sensibility by Stephanie Burgis

This highly entertaining regency romance kicks off a new trilogy in a new world for Burgis, and it's very like our own but for the recent "discovery" (as far as Western society is concerned) of dragons. Said dragons have led to some intriguing new research directions, but mostly their presence in English society is as a trainable pet status symbol for wealthy ladies, and as poor cousin in a house of awful rich relatives, Elinor Tregarth has to look on as her nasty cousin Penelope Hathergill tries to train hers in time for her coming out ball in a week's time. Unfortunately, while Elinor thinks of herself as a sensible, patient sort, and has put up with a lot at Penelope's hands, watching animal abuse turns out to be her limit, and she ends up running away from the house with poor Sir Jessamyn in tow, only to bump into a charming fortune hunter on his way to her a cousin, spend a night getting to know him (in a very proper sense!) in the local inn, and then accidentally triggering Sir Jessamyn's secret magic to transform herself into fearsome socialite Mrs DeLacey, whose strength and courage Elinor wishes she had. Penniless and stuck in another woman's body, Elinor decides her best hope of survival is to accompany charming Benedict Hawkins back to her aunt and uncle's house, and pose as Mrs DeLacey come to help Penelope's debut while helping Benedict with his seduction plan and figuring out her own next move.

Scales and Sensibility absolutely delights in its farcical set-up and all the opportunities for misunderstanding, misdirection, slip-ups and drama it creates: there's barely a chapter that goes by without a terrible coincidence occurring in the final sentences, and Elinor is constantly pulled between trying to maintain her disguise (which slips if anyone physically touches her, and is made more complicated by the fact that her dragon looks exactly like the stolen one except for a few magical facial markings), keep Sir Jessamyn out of harm's way, keep Benedict Hawkins ahead of Penelope's other, wealthier suitor and his conniving sister, squash her own feelings for Benedict Hawkins, try and figure out what's going on with her dragon with the help of Benedict's quiet dragon-scholar friend. In-keeping with the Austen homage (Elinor Dashwood is the "sensible" sister from Sense and Sensibility), Elinor Tregarth thinks of herself as a sensible, steady, boring sort of person, but there's not much space in this story for "sensible" decisions, and Elinor is at her best when she's throwing caution to the wind and really inhabiting the persona she's built up as Mrs DeLacey: a no-nonsense, daring, strong-willed woman who won't hesitate to speak her mind even when other people are against her. The romance is great - and well handled alongside the hidden identities - and the ending does well to reward to all the characters we're rooting for while avoiding too much punitive nastiness against those we weren't. And, if my assumptions about the romantic lead in the next book are correct... well, let's just say I can't wait. 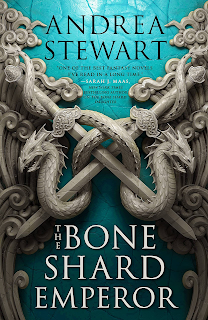 The Bone Shard Daughter was a really entertaining fantasy debut, creating an intriguing archipelago ruled by an insular emperor who maintained power through constructs powered by magical shards of bone from living people. While it had a number of engaging points of view - Jovis, the smuggler with a heart of gold who adopts a magical otter-kitten-pet, was a firm favourite - the heartbeat of the book was with Lin Sukai, daughter of the emperor who is struggling  to cope with mysterious memory loss and pass her father's increasingly bizarre tests while putting her own plans into motion to move the succession along and come out ahead of her rival. Lin's story centred around the workings of bone shard magic, which is essentially a form of blood-magic coding which creates more or less complex automatons that run on the life force of the people whose shards are used. Lin's story was full of unique magic and tense twists, and at the point where The Bone Shard Daughter ends, it left her teamed up with Jovis, ascending the throne, and unable in good conscience to continue using the magic that had defined the series to this point.

That puts Bone Shard Emperor in an interesting narrative position, but luckily there's plenty of other interesting elements seeded throughout Bone Shard Daughter that come to the fore here. Stuck leading an empire that has no idea who she is and only tolerates the power of the Emperor as far as it offers magical protection (which it doesn't), Lin needs to consolidate her power while trying to stay true to her own ideals, seeing off independence grabs from the islands and the machinations of the revolutionary force trying to unseat her while seeing off the invasion of a rogue construct group (who will be very familiar to readers of book one). Jovis, and his magical kitten-otter (actually an ossalen, now very big and very talkative, and still the best character) is now working alongside Lin, but with conflicted loyalties and ghosts from his past to deal with. Meanwhile, islands keep sinking and the looming supernatural threat - the rise of the Alanga, a magical race that the Sukai dynasty claimed to be able to hold at bay - seems to be much closer than expected. Lin and Jovis' travel gives the opportunity to see more of the empire and the worldbuilding here continues to be top notch, especially around the various factions vying for power around the new emperor.

There are also some elements that don't work as well. The secondary storyline with Phalue, governor of one of the islands, and her wife Ranami, is entertaining but still feels quite distant from the primary storyline, and its independent payoffs felt even more limited despite their actually meeting with Jovis and Lin this time. that said, Phalue and Ranami's story adds more depth to life on the islands, and I'm invested in how the two come through as a couple, and I am very excited to see more of Ayesh, their orphan-adoptee, in the next book - so perhaps I'm just out of practice with parallel stories in this kind of fantasy storytelling. There is also a romantic connection between Jovis and Lin that doesn't have much time to incubate before bursting out as a "every time they accidentally touch we get sentences about how a-flutter they are" type deal. There are elements of both characters' experiences that make it more understandable why they'd fall in love so fast, but it feels uncomfortably like it happens because that is what is supposed to happen when two characters like this spend time together in this story, rather than it flowing organically. Still, those are minor elements in what's overall a very enjoyable continuation of the series. 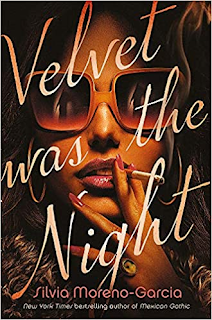 Velvet Was the Night by Silvia Moreno-Garcia

It's been too long since I read a book with a good, ready-made soundtrack and, if you like reading to music, Velvet Was the Night pretty much demands that you put on its 60s-rock soundtrack, and will even reward you with rare moments where the music lines up with one of the many songs referenced within the text itself (for me, this happened in the "White Room" scene, to great effect). Velvet Was the Night is a noir set in Mexico City in 1970, at the beginning of the "dirty war", where government sanctioned violence against communists and other dissidents led to widespread political repression. Into that scene steps Elvis, a mid-level thug who aspires to be more than a two-bit goon even as he idolises his commander and the work they do, and Maite, a woman who spends her life fantasising about romance and building an extensive record collection. When Maite reluctantly agrees to look after her neighbour Leonora's cat, only to have Leonora disappear, she's motivated to start an investigation that soon takes on a life of its own; Elvis is also sent to pursue Leonora, while learning more about how to command his squad and learning that all is not well in the political ecosystem that keeps him employed and useful.

Velvet Was the Night is packed with atmosphere and intrigue, and while there's nothing particularly engaging about Leonora herself - she appears to be in possession of incriminating photos which have gone missing, and has left behind not one but two mooning exes, but her politics are done more interestingly by other characters - there's certainly a lot to enjoy about Maite and Elvis' respective investigations into her, and the way that their paths intertwine as they get closer to tracking down the truth. There's a frequent grimness to these happenings - as you'd expect from a noir centring the political underworld - and it's underscored by the small-mindedness of both leads: we might sympathise with Maite's singleness and how awful her family are about it, but her obsession with status and appearances and her callousness towards people she doesn't consider worth caring about (including the cat) are very unpleasant traits, and Elvis' contempt for his fellow enforcers and mooning over the cultist honeypot he fell in love with before joining the gang is equally eye-rolling. But that all adds to the atmosphere, and, again, it's that atmosphere - and the intricacy of politics behind it - that make Velvet Was the Night a fantastic noir read.