A space opera universe of mysteries and intrigue in a backwater solar system. 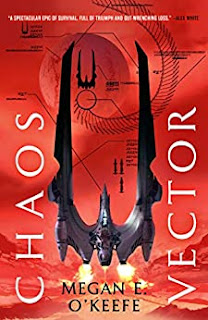 Megan O Keefe’s Velocity Weapon introduced Sanda and Biran Greeve. While Biran Greeve launched himself, a little unwillingly into solar system politics, seeking to become a Keeper, one of the mysterious power group controlling the interstellar gates, Sanda was the militaristic one, a high flying sergeant on a gunship. Velocity Weapon tells a twisty story where Sanda is lied to and tricked by an AI on an enemy warship, and Biran desperately seeks political power for, primarily, finding out what has happened to his sister. The novel was particularly potent for a "Wham! moment" where Sanda’s understanding of what was happening to her, and why, turned out to be far far different than she knew.

Now, with a solar system seething with potential conflict, Sanda free of her captivity, and Biran in a position of power within the Keepers, Chaos Vector continues the story of these two siblings as revelations and conflicts from the first novel start to manifest...as well as new mysteries, and yes, new wham moments!

I am being deliberately oblique to the nature of the wham moment in Velocity Weapon, but want to talk about it in a general sense as a concept, because it so colors the book. I was waiting, as I read Chaos Vector, to see if there was going to be a similar rug pull. In retrospect, there were hints leading up to that twist: the author plays fair with what she told the reader, what she “let slip” and so when things came to light, and how the pieces fell into place.

This novel doesn’t have the single moment that Velocity Weapon has, showing that the author doesn’t want to or need to rely on one large “twist” or revelation in order to make her novels work. There are a number of smaller revelations that make the reader reconsider what has gone before, and rethink more than one character in the narrative. That is what I consider an effective wham moment. Unlike, say, the end of the Mark Wahlberg Planet of the Apes movie which ends in a non-sensical twist, compared to its predecessort at the end of the Charlton Heston Planet of the Apes movie. See the difference? Velocity Weapon’s "wham" is in the Heston mode, as are the smaller ones in Chaos Vector.

This novel is far more wide ranging than the first, which had a tight feel with Sanda on a warship as a quasi-prisoner, and Biran mostly planet-bound and seeking paths to power within the Keepers, the trans-solar system group who control the interstellar gates. This novel has Sanda ranging across the solar system on her quest to deal with the chip implanted in her head, and the mysterious location the information is contained on it. And of course, she is on the outs, if not a fugitive, over the escape of that AI starship from the first novel. Sanda gives us a grand tour of the Cronus system, and we get an even clearer and more nuanced look at a solar system divided between an authoritarian government (Prime) on the primary planet, and a number of settlements with varying levels of fealty - or who are outright trying to maintain their independence, like Icarion. Add to that the power of the interstellar Keepers who control the gates and wield power of their own, and O’Keefe provides a complicated and interesting solar system, with surprises and differences and interesting touches throughout.

Biran, too, gets out of his relative bubble more in this novel. Now that he has a position of power in the Keepers, he has more responsibility, and more adversaries and opponents to his agenda and goals. That means gets to get out and about, although he does feel more cocooned and bound than Sanda is, a reversal of the first novel.  I did also particularly like the small but significant bits of interaction between the siblings. The author enables their interactions across interplanetary distances, a distinct difference from their being firewalled off from each other in the first novel, and the very different but equally ambitious siblings have an intense familial relationship.

The novel is a very contemporary space opera, too, in terms of its characters. Sanda uses a prosthetic leg. One of the new viewpoint characters is non-binary. There are a lot of female characters in positions of authority, and also in conflict with the main character. All of these characters, including the antagonists - in a way, especially the antagonists - are complicated, nuanced and have agendas, goals and drives that make sense and make for multidimensional characters. This is a very well peopled universe, and as fascinating as the solar system is, it's the people who inhabit it who really bring it to life. Whereas Velocity Weapon kept Sanda mostly talking to one character, this is a novel where O’Keefe opens the floodgates on characters. One of Sanda and Biran’s fathers, Graham, gets a lot of play in this novel, and we find out a lot about HIS deal. I kept imagining him in my mind as being played by someone like the actor Tom Wilkinson: someone aging, who has seen a lot, done some things for some very shady people when he was younger, who thought he was “out”, but gets back into his old life to help his children.

Like the first novel, there is also a small additional point of view, a flash back to the founder of the Keepers, and the entire interstellar society, Alexandra Halston. We got to see a few back in time looks at her life in Velocity Weapon, and here we get more.  It is probably not a spoiler to say here that one of the multiple smaller moments in this novel that makes you reconsider everything occurs during one of her points of view. Even more than the first novel, this, as well as the other revelations, show that O’Keefe continually wants to make us question the base assumptions, revealing an even more complicated, and fraught, universe and setup than what the reader might have thought. This novel, then, even more than the first, is a matter of curtain pulling, and having the reader reassess events and especially characters in a new light. This novel, too, makes some of the details of events in the first novel come to be seen in a new light.

That is, if one can really call it such, the only weakness of the novel. This is a novel that really rewards having recently read or re-read Velocity Weapon. It makes for a tightly bound pair of novels (and I fully expect Catalyst Gate, the third novel, to follow this line) and so starting here in this novel, jumping in mid-series, really means missing a lot. This is a series to read closely, to get the full effect of the revelations and plot twists.  Nevertheless, this is a very successful followup to Velocity Weapon and continuing to solidify O’Keefe’s turn from fantasy into space opera. Readers who are interested in the space opera of today really should be checking out what O’Keefe is doing--but not to start here, but rather to launch into her verse with Velocity Weapon.

Bonuses: +1 for crackerjack plotting and Wham! Moments that keep the reader engaged

+1 for a diverse and interestingly peopled and complex universe

Penalties: -1  Readers who have not read the first book, or not read it recently, may miss some of the power and careful structure of revelations and plot.