Natalie Haynes retells and reframes the story of the end of the Trojan War and its aftermath by grounding the story in the perspective of the women of the saga. 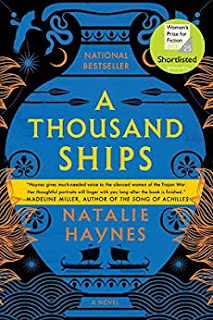 Sing, O Muse of the story of A Thousand Ships by Natalie Haynes, of the sorrow of Hecube, of the determination of Andromache, of the grief filled prophecies of Cassandra, of the patience of Penelope, of the tragedy of the Amazon Penthesilea, who sought death for the horrible accident she caused. Sing O Muse, of this look at the women of the Trojan WAr by classicist Natalie Haynes.

Looking at the Trojan War and its aftermath from the women’s perspective is. In fact, not new. One of the major source materials for these books is Eurpides’ play The Trojan Women (as well as another play by him, Hecuba) among other sources and perspectives. And recent tellings and retellings of Greek Myth (such as the trilogy of Greek Myth books done by Stephen Fry) have done much better in bringing female perspectives to the myths than earlier writers and translators. What Haynes, a classical scholar, brings here is telling of the fall of Troy and its aftermath entirely from female perspectives.

The book is laid out thusly: Starting with the sack of Troy, the main narrative follows the female survivors of the Horse being pulled into the city, and their ultimate fate as chattel to be parceled out among the victorious Greeks. As the Trojan Women await and are subjected to their various fates, the narrative breaks off to other female perspectives that fill in the story both past, present and forward. So while the fate of the women inexorably comes, we divert here and there to other perspectives and stories in the entire arc.

Thus, while we get the story of Andromache, Hecube, Cassandra and the other survivors (including, yes, Helen) and that is the core narrative, we get so much more that really reframes and reorients the events from their perspective. We get Penelope, both in the present and in the “future” (from the perspective of The Trojan Women( writing letters to Odysseus. While much of this is a recapitulation of Odysseus’ ten year voyage home, it gives us Penelope’s perspective on Odysseus and his (mis)adventures, and has some rather pointed and choice words, and deserved ones at that. Even more interesting is Calliope, who is our frame story.  Just like the Epic Poems invoke “The Muse” at the beginning, here we have the invoked Muse herself, Calliope, commenting on the narrative, commenting on the characters, the poet she is inspiring (a close reader can figure out who she is inspiring) and basically declaring that these stories WILL live on, someday. It oddly reminded me, of all things, Robert Graves’ I, Claudius, and I wonder, given the author’s background, if that wasn’t deliberate.

The lack of male points of view means that this story of the Trojan War doesn’t have much on-battle action exploits that books, movies and other media of the Trojan War focus on, and when it does describe these events, it is generally from a second hand telling of those events. The big exception of this is Penthesilea, the Amazon. Drawn to Troy because of an accidental death she has caused, we do see her and her Amazons wade into the conflict, but it is a brief affair. Haynes focuses instead on other matters in this narrative, trusting the readers will pick up what they need to frame and re-see the story.

That is a strength and something to note for this book. The question is this: Can you as a reader unfamiliar with Troy and the Trojan War follow what happened in that conflict? Yes, it’s a difficult task, and Haynes’ narrative does focus on things other than combat, and some things are just not going to come on a screen that focuses on the women. (Diomedes, who is that?). But would someone who thinks Ajax is only a kitchen cleanser connect enough with this material in order to enjoy it? That I am not so sure about. As a side matter, I find the whole idea of “assumed cultural knowledge” for some works that rely heavily on them to be a fascinating problem, especially as the focus of what is taught and emphasized changes over time.

For readers that are more than passingly familiar with the Trojan War, though, there is a lot in this book to unpack and enjoy. It does, after all, provide perspectives that aren’t often told, and done so in a holistic way.In that way, it also reminds me of Roberto Calasso’s The Marriage of Cadmus and Harmony, which twists a lot of stories together to tell a long epic. Here, Haynes uses the marriage of Thetis and Peleus as its inciting incident and anchor point along with the war itself. But we go to the reasons for that marriage, through the war itself, all the way to the return of the Greeks from the Trojan War.

There is also the matter of invention and versions of myths and legends. The low level reader of Greek Myths might not be aware that a couple of the myths and legends around the Trojan War here have been changed and reinterpreted. A medium level reader of the myths and legends are going to find the differences, and may be outraged at Haynes 'inventions and decry the changes she makes. (Predictably these complaints can go hand in hand with those calling the book ‘woke’).  However, the more I’ve read Greek Myths and Legends and read about them in other texts, I’ve come to learn what full Classicists know: there is no one single canon of Greek Myths, and there are plenty of divergences, alternatives, differing versions of every Greek Myth out there. Even things like the 12 Labors of Heracles--there are some differing lists of those, and how he completed a couple of them varies. If you want a cinematic sort of look at this--look how different Perseus’ story is in the original Clash of the Titans movie and its remake.  So Haynes' own reinterpretations and changes from what you might have read as canon are ones I took in a delighted stride, seeing yet new ways to look at Greek Myth.

And that is the takeaway here. Greek Myth and Legend is an endlessly fascinating and changing kaleidoscope of stories that can be told and retold again and again (why Hollywood, in its thirst for franchises, hasn’t done a “Greek Myth Cinematic Universe” frankly BAFFLES me.) Natalie Haynes’ A Thousand Ships provides yet a new and well written view in that kaleidoscope that only enriches and enhances the original stories and source material.

Bonuses: +1 fort excellent use of female perspectives that is not “woke” but rather tells the story of the Trojan War and its aftermath in a new and engaging way.

+1 for the unexpected humor, especially in Penelope and Calliope’s chapters

Penalties: -1  Not certain the story works for those uninterested in the Trojan War.