A novel that miraculously bridges people even when they feel light years away. 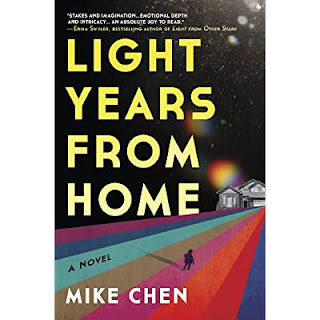 In these times of 2022, it almost feels like contentment was never something that was available. Any memories of such an opportunity feels stretched back to such a bygone era that when I think of it, it’s distant and scrambled. In Light Years From Home, a family is brought something that seemed unattainable for over a decade: the arrival of a long missing family member. The memories of getting to that point aren’t clear in some characters’ cases, but despite how scrambled it is, it’s miraculous. The story showcases the family coming together in a way that feels messy through difficult circumstances but absolutely clean in its heartfelt humanity. Memories can be scrambled, emotions can peak and sink from the unreliability of human actions, but what makes Light Years From Home such a powerful book is that the mundane yet miraculous instance of finding hope after an expanse of hopelessness is always in the cards, no matter how much time has passed to make it seem like an unattainable wisp.

15 years ago, Jakob was abducted by aliens. His two sisters have different approaches to dealing with the disappearance. Kass dismisses the prospect and assumes he wasn’t abducted but just left as the unreliable person he was. Evie thinks otherwise, devoting her time to studying extraterrestrial life, trying to solve the mystery of her missing brother. Meanwhile, the parents are left in mental shambles. There doesn’t seem to be any developments concerning it for a while until at the start of the novel, Jakob arrives on Earth with a special mission. That mission embroils his sisters in it through incisive developments.

The characterization is where the story really shines. Whether it’s Evie’s ardent hope that what she’s dedicated her life to is a reality, Kassie’s fed-upness of her family, or the portrayal of Jakob who’s portrayed as making so much growth even though some of him is initially under a veil of mystery. It all works so well. Character arcs move at a pace that makes it so no one feels stuck in a rut. Just about everything feels like their choices align with their personality, making the plot move organically.

One thing to note is that as organic as the developments are, Light Years From Home definitely favors the exploration of familial bonds and human emotions over a rollicking plot. There are seeds for an explosive story here, but Mike Chen holds back, and it mostly worked for this reviewer. Although, there were some times when the vibrancy of the characters wasn’t enough to buoy some slower sections scattered throughout. Despite holding my engagement for the vast majority of the plot, I think it’s worth mentioning that this could very likely be lacking in speculative and action-packed elements to those in search of it.

Despite having a short supply of speculative elements, Light Years From Home is still imaginative through the way it’s able to carry its proceedings through an original voice and some brilliant plot points. It’s a novel full of love with a tenderness that might seem light years from our home. But the more I read about the familiar and cutting specificity of the characters, the more I realized that such a tenderness is still here–it just seems scrambled and distorted. Jakob goes on an interstellar journey, through many light years, surprising you with its direction but ultimately landing at a place that seems new until you realize it’s home.

Bonuses: +1 For its top-notch emotional intelligence.

Negatives: -1 For some slower and less imaginative chapters scattered sparingly.