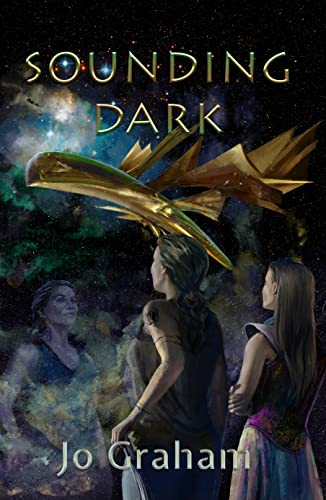 Steel Captain Adelita Massacre has a problem. As one of the captains in the small fleet of the half-pirate, half-freeport world of Eresh, it is her duty to protect her people against the looming Calpurnian threat that might roll like a tide over them at any time. Eresh is a small world, with a tiny fleet, and their freedom is precarious. And so when the Captain investigates the remnants of an attack on the Eresh fleet, she is certain this is the opening gambit in a full scale attack on her world and those she has been charged to protect.

Bister also has a problem. She is the sole survivor after that space battle: but a survivor who lasted far beyond the capacity of her emergency space suit. Even weirder, she is not a Calpurnian or from the Eresh forces at all, but a former Eresh prisoner on board one of the Calpurnian ships, the only one the Eresh  managed to destroy in the conflict. Her inexplicable survival may be tied to her devotion to The Lady of the Void. The Lady of the Void is not commonly revered these days, even on Eresh. But if the Lady had saved Bister...why? And what does she want?

The fate of Adelita, Bister, and the inhabitants of Eresh and beyond may lie in finding and harnessing a legendary ghost ship to help fight the Calpurnians: the titular Sounding Dark.

Sounding Dark starts off first and foremost with an interesting set of characters. Bister, the plot driver for many of the novel's events, is a character who thinks she knows herself, but the unexpected survival puts her on a path that she is winningly both confident and forthright about... and still, humanly vulnerable and unsure what her position and her role really are, or should be. She is also the “well connected” character who forges bonds and connections across the spectrum of Eresh society and gives the reader hooks to understand those she interacts with. She is undoubtedly the heart of the novel and the primary point of view.

Captain Adelita Massacre, as the face of the expedition by Eresh, is the bold and strong starship captain that you wish, even two decades after Captain Janeway, was more common in space opera. I particularly liked her connection to her fellow Captain Tal Robber, who winds up going through some troubles of his own as the Calpurnians move in. As the novel progresses. Tal’s role in the narrative shrinks a bit, and I think that is a bit of a missed opportunity on the part of the novel, but what we see gives a good contrast to the events going on during the search for Sounding Dark.

And even within the names of those characters, Graham unfolds rich and inventive worldbuilding. Eresh last names relate back to the crimes that got their ancestors deported from Calpurnia in the first place, helping to give Eresh a bit of an Australian feel... if Australia had managed to break away from the British Empire and was under threat of reconquest at any time, but in the meantime Australia was making a living as a trading entrepot. Then there is nearby planet Inanna, where the population has been deemed ‘Tainted’ by the Calpurnians and in theory, are not only restricted in their technology and development, but not allowed to leave (although Bister proves that people can and do escape). My mental attempts as I read the book to pigeonhole it in terms of other works constantly brought up imperfect fits. Sure you could make the Calpurnians into Lois McMaster Bujold’s overpowerful and overweening Cetagandans, but Eresh and Inanna don’t match to Barrayar in any meaningful way. Is Eresh resonant with, say, C.J Cherryh’s Downbelow Station? I think that might be firmer ground, but the political frames don’t quite match--this ‘Downbelow Station’ is *already* free, however precariously. But I do think that readers who like Cherryh’s work will find favor with Graham’s.

But the major worldbuilding talking point in this book is a spiritual one. What is our relation to the numinous? How do cultures engage with the ineffable? These are questions that human societies have faced since there were human societies. Graham leverages this connection to the numinous to make it a central part of the interstellar civilizations in her novel in a way that much space opera and science fiction in general has struggled to try and deal with. For a long time, and in a large swath of science fiction, a relatively secular future has been the default, if not outright rejection of religion as a force in people’s lives. And even in those SFF worlds where religion and a connection to the numinous was acknowledged, there was often an awkwardness in talking about it and engaging with it as an everyday thing, a natural part of people’s lives.

Not so in the world of Sounding Dark. There are multiple paths to the numinous within Sounding Dark, and it is a now underexplored one - reverence to the Lady of the Void - that is a key thread of character growth as well as the flow of the plot itself. The glossary at the back fleshes out and illuminates some of how and why this interstellar civilization developed in the way it did. Although I do appreciate it being here at all, and it answered questions I had while reading the novel, I do wish it was a little more enfolded in the narrative itself, because it is such a crucial factor in understanding and seeing how the plot unfolds and how it affects the characters, particularly Bister.

In sum, Jo Graham’s space opera is a richly imagined narrative with a spectrum of relatable heroes who face overwhelming odds with drive, determination, grit, and most powerfully of all, hope. Sounding Dark uses these heroes to buttress a story on multiple levels: a fight against an interstellar tyranny, a search for the meaning of an unexpected survival against all reason, and the story of a lost, ancient connection to a Mystery reforged. With its inventive use of Sumerian motifs in its intriguing worldbuilding, Sounding Dark soars to reach a liminal place on the boundaries of science fiction and myth.

I understand that Graham intends more novels, not with these characters, but elsewhere within the “Nine Worlds”. I am intrigued to see further stories set in this universe.

Bonuses: +1 for strong and inventive use of the numinous in the worldbuilding and the makeup of the characters, a real highlight of the novel.

Penalties: -1 Some real roughness with the plotting of a couple of narrative threads