Microreview [book]: In an Absent Dream, by Seanan McGuire

Step through another doorway and find your adventure filled with heartbreak and acceptance. 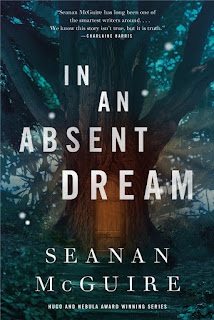 Each novella of the Wayward Children series has told the story of one (or more) of the children at Eleanor West's School for Wayward Children, though perhaps "children" is the wrong word to use here. At some point everybody at Eleanor West's went through a doorway, had an adventure, lived a life in a world that isn't our own but which is also so much better suited for who they truly were, and then come home and had to figure out how to cope with living a mundane life in a world they don't truly belong.

With Every Heart a Doorway (my review), Seanan McGuire introduced readers to the idea of doorways and the portal worlds in which these children more truly belonged. Each novella has explored one of the perhaps uncountable number of possible portal worlds. In an Absent Dream tells the story of Katherine Lundy. Astute readers may remember that we first met the grown up Lundy in Every Heart a Doorway as the therapist and second in command at Eleanor West's, except that "grown up" means that Lundy was at least in her sixties but had the physical appearance of an eight year old girl. Everybody has a story. This is Lundy's.


"She understood now, that the other children weren't coming; that they would always be shadowy voices on the other side of a fence, refusing to let her through, refusing to let her in. She understood that she had, for whatever reason, been rejected from their society, and would not be readmitted unless something fundamental in the world chose to shift in its foundations, widening itself, rebirthing her into someone they could care for."

Lundy's doorway takes her to the Goblin Market, a world where each and every transaction must offer "fair value" else a debt is owed, and in that world a debt has a physical manifestation. It is an eminently fair world, though certainly not an easy one. As with any world, there are rules and those rules must be followed if one truly wants to stay (and stay human).

The Wayward Children series has, thus far, been one where the children are looking for their doorway to open again so they can return to the world where they truly belong. Not the Goblin Market. The Goblin Market expects the children to go back to the "real world" multiple times so that they continually choose the Goblin Market, so that they always have the opportunity to "be sure". Other worlds have had that opportunity to return, but that return has always been desperately hoped for and unexpectedly granted.

The genius of Seanan McGuire is how tightly she is able to wrap barbed spikes around the narrative so that as the reader is pulled in closer and closer that those barbs pierce our hearts and we don't mind one bit. McGuire so perfectly captures the painful alienation of children. In Lundy's case, that alienation is her sister. Lundy has quietly accepted the future path of her life and is generally content until the moment she finds her door. Lundy's younger sister only knows that she has been abandoned for years by a sister she doesn't get the chance to know and grow up with. That hurts.

We're so often focused on the adventures the children are having in the worlds where they truly belong. Sometimes we get glimpses of the parents who try to mold their children into somebody they, the parents, want them to be. See Down Among the Sticks and Bones (my review) for an example of that. But what we don't see in the Wayward Children series is the wreckage of a family left behind. We witness the escape.


"Wood does not customarily glitter. Few things do, unless they are attempting to lure something closer to themselves. Sparkle and shine are pleasures reserved for predators, who can afford the risk of courting attention. The exceptions - which exist, for all things must have exceptions - are almost entirely poisonous, and will sicken whatever they lure. So even the exception feeds into the rule, which states that a bright, shimmering thing is almost certainly looking to be seen, and that which hopes to be seen is pursuing its own agenda."

Because Seanan McGuire's writing is so smart, insightful, and clever - we get observations like the above passage which are so pointed and so perfectly placed that we recognize that McGuire is writing about more than just sparkly things in the forest. On the surface, that's obvious, but In An Absent Dream is filled with gem after gem of lines and observations just like that.

In an Absent Dream is a perfect delight. From the storytelling, the worldbuilding, the characterization - it is everything you'd want or expect from Seanan McGuire.


"It is a place where dreamers go when they don't fit in with the dreams their homes think worth dreaming. Doors lead here. Perhaps you found one."

Bonuses: +1 for McGuire's wit and wisdom

Penalties: -1 because there is a slight hint of sameness in the overarching story of discovering the door, finding one's place, and then losing it.