Hello! It's the final Blaseball short circuit! People who read this column and keep up with Blaseball will notice that there was a circuit back in December that I didn't cover: somehow, I missed the start of the season and then couldn't find my way back in between day job priorities and other day job stuff.

The nice thing about short circuits is that I don't feel I've missed too much by being out of action for what turned out to be a somewhat uneventful two-week season. There was winter weather! And a really drawn out game schedule! There were some Peanut shenanigans, but the Peanut was mostly well behaved and apart from remaking the Ohio Worms in its image, nobody had anything particularly horrible happen to them. And congratulations to [goes to look it up] The Canada Moist Talkers for taking home an icy victory! Someday soon the Blaseball community is going to wake from hibernation and immortalise the winners of its first two-week season as the fine team of well deserving players that they are. Were. They're gone now.

But enough about what happened before. Let's talk about what's happening now. This circuit is another two week long season, but where the theme last time was ice and peanuts, this time we are enjoying a big ol' party! The divisions have been renamed (Uptempo has bop and jam subdivisions, Downtempo has dirge and ballad), the regular season matches have been interspersed with special prize games, where two teams get to duke it out for a fancy item while playing in glitter weather, which occasionally awards prizes of its own. Having a period every few hours where your own team probably isn't playing, but there's something to watch and bet on, is a nice way to break up the hours and make breaks from the splort a little bit easier, even when things are tense and exciting.

According to the very elaborate short circuit calendar, there's plenty more planned, including daily elections for "squid gifts": that's right, Blaseball's chilled out squid god of the underworld, the Monitor, seems to be taking on the role of hypebeing for this party themed adventure, handing out confetti cannons and more fun and/or dangerous stuff throughout the week. And to keep things interesting in the middle of the season, there's a "Fiesta" planned: where the bottom twelve teams will play against each other in a tournament to see who can remain in party time for longest. Party time, for those who are only just picking up Blaseball, was previously a rule that enabled teams that were mathematically eliminated at the end of a season to pick up random stat boosts for their players: in the Expansion Era having a terrible season meant getting to Party Time earlier and potentially turning your mediocrities into superstars for a comeback seasons later. While the eventual effect of this was to inflate player stats to unsustainable levels, its exciting to see Party Time come back as a mid season leveller, paving the way for some really interesting shenanigans next week...

...is what I WOULD say if the Georgias weren't actually kind of good this season. Our current team of randoms are OK at hitting! They are OK at pitching! And, on the "less obvious but actually really important" side, the lineup has some serious defensive skills between them, meaning fewer runs being scored against us and better chances of victory. For this reason, and because we are currently first in the Downtempo Dirge division and tied for wins, I am wishing all midseason fiesta teams a very mediocre party time, with all of my love from under the sea. 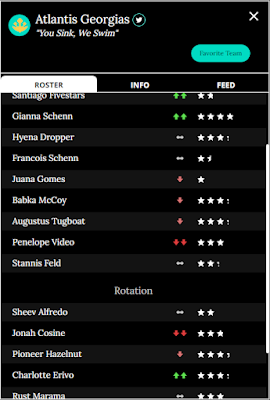 Finally, that two week schedule contains some of the most exciting words in Blaseball: redacted ones. While we have some idea how the next few days are going to go, next week's adventures include the random awarding of [blank] to the winner of the midseason tournament, followed by regular games to allow the holder of [blank] to defend it against other lower-placed teams, as well as a whole entire [blank] Tuesday event, some tantalising "however, [blank]" shenanigans in the Postseason, and... whatever is going to happen at the end of the season. Nothing bad has ever come from uncovering a redacted word in this game, and I sure am excited to learn what these ones are while we pursue victory. Shenanigans will be had, and they will probably be annoying: what else do we watch Blaseball for?