Not "Unforgiven" like the Metallica song, or the Clint Eastwood classic. FYI. 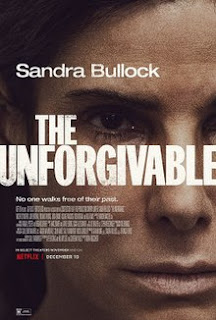 This may be slightly different fare than we usually cover here, but I nerd out over thrillers, so I reserve the right to cover them. Plus, it's set in Seattle, where I live, so I feel a certain obligation to.

Smart-aleck comments aside, The Unforgivable comes in with a fairly unique premise: We follow Ruth (Sandra Bullock) as she is released from prison following a 20-year stint for killing a Sherriff when she refused to vacate her foreclosed-upon family home. Her sister, who had been in her care, is 5 at the time of the shooting, and has since been adopted into a Nice, Loving Home(tm). She has a comfortable life, is a piano prodigy, and has no memory of her big sister.

The two sons of the murdered Sherriff find out of her release, and begin plotting their revenge because she is "walking free with no consequences", and for the things that are actually pretty good about this movie, it's sentences like that which make it fall sort of flat to me.

Because, as we follow Ruth - struggling to get a job, connect with people, and generally have a life after losing 20 years of it in prison - she definitely has consequences, so the whole revenge plot (which is central to The Twist, so I won't spoil it) seems hollow.

Which is then my second problem with this movie - it severely lacks for sympathetic characters. Ruth obviously garners our sympathy, if nothing else by being the protagonist and looking generally sad, but that goodwill is erased by her generally unhinged efforts to get in touch with her sister, and manipulation of people in order to do so. And when we flashback to the day of the murder, she is clearly in over her head taking care of her much younger sister in the wake of her parents deaths, but that doesn't make killing someone a sympathetic act. Maybe that's the "unforgivable" part, but I would have liked someone who is a major player in this movie to be more likeable.

All of which would probably land better if the time we spent with things that are trying to make us feel sorry for her addressed, say, the effect the American prison system has on people and leads people right back in, instead of a couple on-the-nose comments about it, after which we never hear about it again.

Lastly (I am realizing I didn't like this movie as much as I thought I did), characters just... disappear for really long stretches. The brothers are just... not there for a while, and then, oh hey, they're trying to kill her. It also seems like they forgot they cast Jon Bernthal, because he shows up, seems like he is going to be a major part of the story, and then disappears. I expected him to pop back up like a lot of other characters, but nope, he's gone.

Finding something nice to say, though: The casting was great (even if they forgot about Bernthal). Vincent D'onofrio and Viola Davis are excellent as always. I am always torn about Sandra Bollock (especially since this is like the third or fourth film where she plays this type of character), but she fit the role well.

My absolute favorite part is when they are driving into Seattle at the start of the film, and then it starts to rain, so you REALLY know it's Seattle, and then it never rains again for the entire movie. Also, there is no way you can get from Seattle to Snohomish on bus and get back in time for your shift.

Baseline Assessment: 6/10. I didn't hate it, even though I ragged on it quite a bit.

Bonuses: +1 for an excellent, tight cast

Penalties: -1 for overall clunky pacing, -1 for the twist being way too predicable (you probably figured it out just from reading this)

Dean is the author of the 3024AD series of science fiction stories (which should be on YOUR summer reading list). You can read his other ramblings and musings on a variety of topics (mostly writing) on his blog. When not holed up in his office writing, he can be found watching or playing sports, or in his natural habitat of a bookstore.