Lara Elena Donnelly’s Base Notes takes the author's penchant for strongly realized characters and settings and turns them loose in an underground world of a parfumier who carries a very deadly secret as to the power and success of his product. 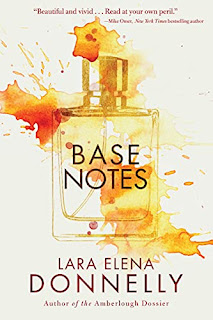 Vic is a parfumier like no other. He truly has a nose for scents, and a honed natural talent for crafting and making scents come to life. Some of his creations, however, those for a specific clientele, are extremely special, for they can evoke for a wearer, and a specific wearer at that, a full sensorial memory of a time and event. To make those scents however, requires raw materials of a sort that requires Vic to be something more than a parfumier: a murderer.  Now, as a powerful and rich former client asks Vic for an even more complicated creation, the garrote around Vic and his business, and his secrets, slowly tightens.

Vic’s story is told in Lara Elena Donnelly’s Base Notes.

Readers of Donnelly’s Amberlough novels have come to expect strong and vivid characterization, and deep and vivid language in evoking a sense of place for them to inhabit. Readers who are looking for spare, clean, “invisible” prose are readers who, I find, don’t take to Donnelly’s vividly imagined worlds. Her word choice, structure and style are immediately visible on the page. For readers who want that immersion into language and want to engage with it, I am happy to report that her talents from the Amberlough Dossier are on full display here.  Here, though, the author goes for a memoir, a memory, a recollection by our narrator, the author, Vic.

In this way, Base Notes keeps that high sensory writing and marries it to a very personal first person perspective. Given Vic’s profession as a parfumier, it means that the book is full of olfactory, smell based sensory data first and foremost. In a world and genre where sight is a primary sense, hearing perhaps secondary and other senses often get short shrift by writers, a book where we are immersed in this main character’s mind and perceptions means that smell is as important as any other sense in how Vic perceives a scene, and the author’s skill translates to that page wonderfully. This is a book that immerses you in every scene that Vic inhabits, and scent is the first and primary sense that the author uses to do that.

Vic himself is a fascinating character, for being a horrible human being. The author runs a really thin tightrope here. We spend every moment of the book in Vic’s head, so how do you make a preternaturally good parfumier, who is also a remorseless murderer, into a character that we can understand, even sympathize with, and then watch with horror as the inexorable results of his actions drive him past his own (already messed up) boundaries and beyond even the moral event horizons that were already sociopathic into worse territory?  It’s difficult. The sensory detail does help. Being immersed into Vic’s world and only gently being told of how he gets his special perfumes done helps. We also see Vic himself fumbling through a relationship of sorts, as events bring him into the circles of Giovanni, his barber, and Jane and Beau, a couple whom he forges a friendship with, and in the case of Jane, something more. We feel his pain and anguish as he himself tries to work out being, for lack of a better word, human with them. The story of his relationship with his former mentor, Jonathan (Vic is bisexual, it should be noted) is one that slowly emerges from its base notes as the story unfolds, and part of the mystery of the story is just how that relationship went so very wrong--and how it formed the Vic Fowler of today.

The plot, then, you will not be surprised is strongly character-focused, setting up the main character in an ever tightening situation, and every step of Vic’s descent (not that he was a good man at all when the novel starts) is inexorable and inevitable. I guessed early on once all the main characters on stage how things were going to go, but it is the how and the why and the clockwork beats that kept me turning pages. This is not a novel of redemption of a terrible person, and while the author humanizes Vic at first, as things turn darker and darker, the window of sympathizing with Vic turns to horror and for me, a turning away from sympathizing with him. It’s a high wire tightrope act--make it clear that Vic is a terrible person, early on, really get into his head and make us understand him, understand his boundaries and his circumscribed world. And then when we see him transgress those, when events inexorably force him to cross the boundary of an ever shrinking circle of action, then for me, it then becomes a fascination to see how and why it will end.

What this means is, that, like any SFF novel, but in harsh and strong relief, that this is not the novel for everyone, or for every moment. (If I personally was in one of my low periods, this novel would not have worked for me at all). This is a novel about a parfumier so singularly minded on his craft, so driven that he has not only have committed murder in the past, not only have the apparatus to deal with such murderers, but coerces others into such a life as well.

Beyond the sensory and story of Vic, the novel does not lean heavily on theme, but theme definitely drives the narrative. This is a novel that looks at modern “late stage capitalism” and how it drives Vic, and how Vic uses the drive to manipulate and move others. The phrase “Eat the rich” does get invoked here.  Mind, Vic is a terrible person who does terrible things, and drives and manipulates and offers openings to other people to do terrible things. But, you can see the social forces goading and driving him, and other, to consider those acts. And more than consider the acts. Vic’s own rather terrible living situation encapsulates the problems of housing in America today, for example.

If such a protagonist as Vic and a story is something you might find favor with reading, Base Notes is a story that can enthrall you with its writing. Although the story is very different, there is a movie that I kept mentally flashing back to as I read this book, and that is Perfume: The Story of a Murderer. Some of the aspects are similar (strange ways of getting scents, preternatural senses, a science fictional element) but the story is very different in how it plays out that it can be thought of as a companion piece rather than aping it. Or, to use the tools of the book and movie themselves, there are elements in the “Scents” of both the movie and the book that have familiarity, but the resulting perfumes are different and do different things, but close enough that those who enjoy one will definitely enjoy the other.

Bonuses : +1 for a very vivid and immersively written sensory experience of the first focused on smell that is rara avis.

+1 for tight and inexorable plotting and a story that slowly constricts around the main character and drives him to an inexorability that keeps you turning pages.

Penalties: -1 This is a novel whose main character and his actions are *definitely* not for all readers. Caveat Lector!