A novella with the warmth of a flame, without the pain that comes with it. 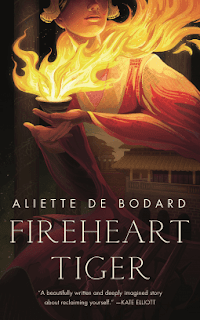 Fires can be a source of comfort, but its smoke can blind and disorient you. Scorched areas can be mistaken for places of safety if your surroundings aren't clear. The source of burning sensations might be you burning with passion or literally burning. Fireheart Tiger tackles the confusion of a conflagration, both in a literal and metaphorical sense. The story goes back to a fateful day in which flames left a mark on the protagonist, as they vacillate on whether it had lasting gratification or pain. Add in diplomacy between kingdoms on a scale comparable to epic fantasy tomes, and you have a clever novella that manages to be both intimate and grand, sometimes within the same sentence.

Fireheart Tiger takes place in a fantastical landscape, following Princess Thanh who is taken from her home country of Bình Hải as a royal hostage to the colossally powerful Ephteria.  One day, a fire spreads throughout the Ephterian palace, and Thanh escapes with the help of a stranger of whom no one else seemed to know exists. To complicate matters, Thanh had a love affair with the Eptherian princess, Eldris, before she returned home. Traumatic memories and fiery surroundings encompass Thanh for many years, until Eldris and her cohort Pharanea comes to Bình Hải for political negotiations. Sparks fly literally and figuratively.

This novella constantly shifts from plot point to plot point, that kept me on my toes without unmooring me into confusion. The craft involved with implementing poetic language that benefits the atmosphere, pacey scenes that never lose focus, and characters that I felt like I knew inside out by the story’s conclusion, deserves kudos. Mostly because the novella juggles a small, insulated cast of characters with subterfuges and violence that impact other kingdoms. Fireheart Tiger is like an expansive web that leaves the reader in the center of it, while also skillfully and pithily letting them know of all its disparate parts.

The characters in Fireheart Tiger encapsulate different elements of fire. There’s the dazzling elegance of Eldris.  The fireplace-like warmth of the mysterious Giang. The chaotic, vacillating attitude of Thanh, like they’re a windblown flame. And the severe, destructive force of Pharanea. It’s a wide gradient of personality types, which is perfect for conflict, and as you would expect, things become messy with glorious results.

If there’s one gripe I had about the book, it’s that the ending happened a little too quickly. But I give props to the book for making me think of that problem, because if it was unpleasant to read, I would find its brief conclusion to be a blessing. Despite the way it barreled through the conclusion, I liked where things ended up. Fireheart Tiger veils the reader until close to the end of the story, regarding certain characters’ motives and standings. Eventually, the smoke starts to clear, motives become concrete, and the reader finds out how things really are. I won’t spoil the reveals, but I will say that the ending was the book’s last of many showcases of its skill. When the smoke cleared, I didn’t see a ruinous disaster, but a carefully crafted tale that looked better, not worse, because of the fieriness that ignited the story and never relented.

Bonuses: +1 For engaging me enough to read it in one sitting, completely losing track of time.

Negatives: -1 For a conclusion that left me wanting a little more.