A worthy follow-up that demands and rewards the reader's attention 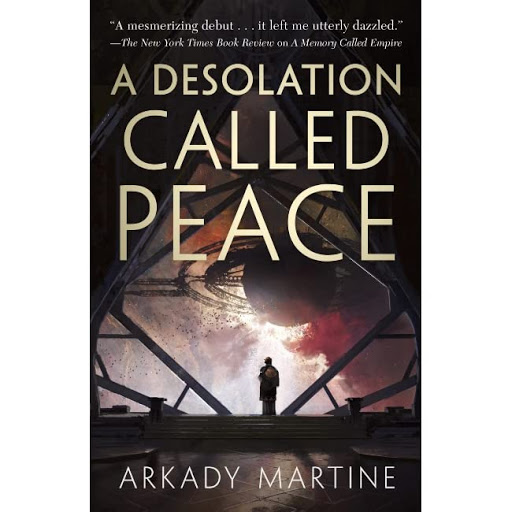 A Memory Called Empire was a highlight of 2019: a politically intricate, engaging space opera set in an empire which considers itself the heart of civilisation, exploring the concept of cultural hegemony and concepts of belonging from the perspective of an outsider, Mahit Dzmare, who has spent her entire life wishing to assimilate but finds herself ill prepared for the reality. There's also the small matter of Mahit's predecessor - the former ambassador to Teixcalaan - dying in super mysterious circumstances, and the resulting combination of upheaval and culture clash makes for an outstanding novel, which you should really go and read for yourself if you haven't already (seriously, go do that before reading this sequel review, otherwise I will not be held responsible for what happens next).

A Desolation Called Peace deals in large part with the biggest outstanding plot point from its predecessor: the arrival of an unknown alien fleet on the outskirts of Teixcalaanli space, close to Mahit's home of Lsel station. In doing so, it shifts the focus of action away from The Jewel of the World, Teixcalaan's ostentatiously named capital, and onto the fleet of ships tasked with uncovering the nature of the threat and neutralising it, finding out what happened to the Texcalaanli colonies which went dark in these areas as they go. (Readers of the genre may surmise that whatever happened to those colonies wasn't good, and it's not a spoiler to say you'd be right!) The commander - or yaotlek - of that small fleet is Nine Hibiscus, who is dealing with a vastly underpowered delegation for the size of the mission she has been sent on, as well as open dissent from 50% of the ships under her command due to political infighting between her own Ministry and the Ministry of Information back on Teixcalaan. Trying to understand an enemy which appears to be able to attack without warning, and with intense coordination, and whose only language is some sort of nausea-inducing theremin screech, she calls for diplomatic backup, only to be provided with Three Seagrass - Mahit's former cultural liaison and love interest - and, breaking all reasonable protocol, Mahit herself.

Through the book's prelude and early interludes, the reader gets a sense of the alien's concept of the world, and of their ideas about what does and does not constitute a conscious, fully matured person, far earlier than the characters do. A Desolation Called Peace's opening paragraph begins by laying out a concept of thought and communication that is at direct odds with the use of language: "to think as a person, and not as a wantful voice, not as a blank-eyed hungering beast, not as a child thinks, with only its own self and the cries of its mouth for company." Through these opening pages, we get a semi-comprehensible picture of what the contact between the humans and this alien group looked like from their perspective, as well as an immediate understanding of a consciousness that seems in every way at odds with Teixcalaan: a culture which places linguistic traditions at the absolute centre of what it means to be a civlised Teixcalaanlim, where laws are written in poetic forms, and where mind-altering technology (like the imagos of Lsel station, which pass down technical knowledge and fragments of personality from one generation to the next) is taboo except in a few rare circumstances.

Despite having a good grasp on what the humans are going to discover about their counterparts, it's still fun to watch this first contact play out, especially because its surrounded by so much of the fallout from the first book. Mahit begins her journey back on Lsel Station, struggling with a malfunctioning imago with the personality of her ambassadorial predecessor and trying to figure out where she fits in between the competing factions of Lsel and the continued draw of Teixcalaan, despite the heartbreak and trauma of her prior visit. Three Seagrass - whose perspective we now see firsthand, rather than the tight focus on Mahit in the previous book - has also been deeply affected by Mahit's departure, and when she is sent to the front, her decision to collect a disgraced "barbarian" ambassador along the way is clearly driven by something other than practical need. Having Three Seagrass' point of view keeps her on the right side of sympathetic even as we see her work through her immense prejudices against Mahit's background (in one pivotal scene, she offhandedly asks Mahit to hand over her jacket so that she can clean vomit off the floor with it, assuming that her Stationer clothes would be better for the task than a Teixcalaanli uniform). It takes Three Seagrass and Mahit the better part of half a book to reunite and make their way over to the centre of the action, but it's a moment that's well worth waiting for, as the dynamics between them and the wrench that Mahit's presence throws into the workings of the fleet get things moving very nicely.

There are other characters - both returning and new - who also contribute to the tapestry that is A Desolation Called Peace's central plot. Eight Antidote, the 11-year-old 90% clone of the former emperor who is now the assumed heir to the current holder of the title, provides a fourth point of view which initially felt rather forced, especially as Eight Antidote is a very precocious eleven-year-old and having him narrate things from the perspective of his eleven-year-old baby-emperor ego makes it hard to connect with him. As the politics of the fleet and the hub coincide, though, and Eight Antidote goes beyond figuring out the puzzle of what's happening around him for its own sake and begins genuinely grappling with the moral questions behind it, his actions become far more interesting and integral to the plot. Also of note is Nine Hibiscus' adjutant, Twenty Cicada, a high ranking fleet member described, normally in the same sentence, as both the perfect Teixcalaanlim and as a cultural oddity. Twenty Cicada grew up on a colonised planet which still maintains a cultural belief in homeostasis, and characters constantly pick up on small elements of his appearance and behaviour - up to and including his name, which shouldn't have an animal in it to be a "real" Teixcalaanli name - which mark him as different. His differences start out as a neat reminder that the empire is not the homogenous thing we saw through Mahit's eyes in A Memory Called Empire, and becomes something rather more important as events in the fleet unfold, making him an intriguing character who, by the end, might have even surmounted the book's disaster lesbians to become my favourite.

Like its predecessor, A Desolation Called Peace isn't an easy read, especially for its first half. Perspectives change, regularly, mid-chapter, schemes and counter-schemes are described and enacted in intricate detail, and while the prose itself has lovely moments (particularly the prelude and interludes), it doesn't attempt to directly replicate the specific charms and poetic turns of Teixcalaanli, which are rendered in a way which, while still poetic in meaning, makes it clear that the English text is a translation of something that scans and sounds very different in the original. It adds up to something which keeps its audience at a slight distance, even as the characters exude their own charms and progress through plot points which are, at turns, horrifying, hilarious and engaging. If you can spend the time with it, though, A Desolation Called Peace promises the same engaging, thoughtful science fiction as its predecessor, in a context new enough to make it fresh while building on the commentary set up in A Memory Called Empire. Thoroughly worthwhile.

Bonuses: +1 a sequel which builds out from its predecessor in a perfect way; +1 excellent characters both returning and new

Penalties: -1 Holds its reader at arms length from the cultures and languages involved