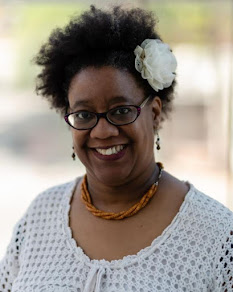 We all love short stories.  On the days that you are itching for something a little longer than a short story, but a little shorter than a novel, the webzine GigaNotoSaurus has you covered.  Started in 2010 by Ann Leckie, GigaNotoSaurus has become know for keeping it simple, and doing it right. The 'zine has little in the way of bells and whistles, and lots in the way of high word counts,  high levels of diversity, and high quality fiction that you get to spend a little more time with, due to that high word count. All fiction published by GigaNotoSaurus can be read for free at the 'zine's website.

I was lucky enough to meet LaShawn Wanak at a convention back in 2019, and then saw her speak at a virtual convention in 2020.  Her excitement about editing longer fiction at GigaNotoSaurus was infectious, and I knew I needed to learn more about her and the 'zine.  My only regret is that it took me so long to do so.    If you're a regular at GenCon or WisCon, or a regular reader of Lightspeed Magazine, Uncanny, FIYAH, Strange Horizons and other popular magazines, you'll recognize Wanak's name, as her short fiction, essays, and book reviews have appeared regularly in many publications since 2005.  You can learn more about Wanak by following her on twitter at @TboneJenkins and checking out her website, The Cafe In the Woods.

Wanak has been the editor at GigaNotoSaurus since September 2019, and since then she's brought in slush readers, defined her editorial style, and made a deep dive into the process of editing longer short stories and running a webzine. She was kind enough to let me pick her brain about her experiences as an editor, how she keeps everything organized, and how much the online writing sphere has changed since she starting publishing.  Let's get to the interview!

NOAF: One day in summer of 2019 it was a regular day, and the next day you were the new editor at GigaNotoSaurus! How did you become the editor of the magazine? What were those early conversations like? Once you were settled into the role, how did you know what to do?

LaShawn Wanak: It seems like a long time ago! At the time, I wasn't looking for an editing gig. I had just moved to a new position at the dayjob that freed up my time to dedicate towards more writing. I got an email from Anna Schwind, who used to be one of my editors at PodCastle. She mentioned that Ann Leckie, who was the main editor of GigaNotoSaurus, was looking for someone to take over the editorial duties while she moved to more of a publisher role. It had intrigued me, because I had deeply loved my time at PodCastle, but had to step down due to the dayjob stuff. Now, the timing was right, so I said yes.

NOAF: GigaNotoSaurus isn't your first editing gig! Back in the day, you were an associate editor at PodCastle. What are some of the biggest differences between editorial duties at PodCastle and GigaNotoSaurus? Do the two 'zines have any at all in common?

LW: It feels weird to be at the helm of deciding what stories come into GNS. Luckily, my experience at PodCastle taught me well. I also learned a lot from Anna Schwind and Dave Thompson, who were my editors at the time and made the final decision on what stories to publish. They valued my input on the stories I passed along to them, and they trusted me to know what stories fit in Podcastle and what didn't. I'm now encouraging the same input and feedback with my own slush readers.

NOAF: You've now been at the helm of GigaNotoSaurus for around a year and a half. What do you know about editing the magazine now, that you wish you'd know when you started?

LW: That it's okay to ask for help. It took a long time before I realized I needed help managing the slush, and to do that, I had to bring on my own team of slush readers. The team I have now is sooooo helpful in getting things to the point that I can focus on reading and purchasing stories. I do feel like I'm still learning the job, though, especially since we've only just opened up submissions again in January, so we're still finding our rhythm.

Another thing I like about my team is that I can discuss the stories I have in mind for publishing. I wanted my team to be diverse so that they can catch things that I, a Black woman but who's also cishet and abled, would miss.

NOAF: Give us a behind the scenes of GigaNotoSaurus. What is a typical week like for you? How far in advance are you buying stories to publish?

LW: Usually a typical week is reading. Lots and lots of reading. Sometimes I jump in and help with the slush. Other times, I'm doing deeper reads of the stories that are passed on to me. When I read a story, I like to do it a couple of times and see if I really want to publish it. On the rare occasion, there are stories that so drag me in that I know right away that I'm buying it. There are others where I need to seriously think. Maybe there's something about the story that pulled me in, but there's just one thing that's off--maybe it's pacing, maybe there's character's action that doesn't sit well with me, or maybe there's something about the world-building that isn't clear. If it's a good enough story that I still want to publish it, I usually ask for a rewrite.

Other weeks I reserve on getting the story ready for publication, or sending rejects and or acceptances. I've just now settled into a routine that works, at least for now. I try to buy stories two or three months in advance, although now that submissions are open again, I want to expand that to at least six months in advance.

NOAF: What types of stories is GigaNotoSaurus looking to publish? Are there particular subgenres you are seeking, or any particular subgenres of types of stories that you are bored with, or sick of seeing?
LW: That's hard to say! I'm a sucker for literary fantasy stories with lush worldbuilding, but I also like engaging science fiction. I also like stories that use genre to delve into identity, race, gender, sexual orientation, ability, religion, etc. But I'm also like stories that make me laugh out loud. I don't know, I guess the best thing to say is surprise me.

What I'm not a big fan of is the standard sword and sorcery stories, where a guy goes out to save the world, or is the chosen one. I'm also not huge into blood and gore. Also, stories that have violence against women and/or children are a very, very hard sell for me. This goes for 'fem sexbot' stories, which for some reason we get a lot of--I don't know why.

NOAF: When stories are in the 2,500 – 7,500 word range, a slush reader or editor can get through the submissions pile in a timely fashion. GigaNotoSaurus is famous for publishing longer works, up to 25,000 words, around five times the length of the typical short story. How long does it take you to get through the submissions pile? Do you have a team of slush readers who helps you?

LW: Again, we just opened up, so we're still finding our groove. The good news is that the stories I have under second consideration are stories from when we first opened up this year, so if you haven't heard on your story that you submitted in January 2021, it means it's with me.

NOAF: What advice do you have for someone who wants to get into editing? As far as skillsets and processes, what's the major difference between and author and an editor (if there are any)?

LW: You need to be organized. I had to put together an editorial calendar that has deadlines for when I send out acceptances, contracts, editing a story and getting it ready for publication. Having a set schedule is new to me; as a writer, I'm a lot more loose in scheduling things. With GNS, I can't let a deadline slip. I've made it a goal to have a story published every 1st of the month, and I'm happy to say that I've pretty much stuck to that goal.

NOAF: You've been publishing poetry, short fiction, interviews, essays, and blogging online since 2006. What changes have you seen in the online sphere over the years?

LW: Oh boy, lots of things. I feel in many ways stories have gotten easier to publish, and paradoxically, harder to publish. In the past year alone, there has so much done to highlight Black writers, which has been such a boon On the other hand, the pushback has been fierce and disheartening, and it's just a microcosm of what's happening outside of genre over the past decade. I've seen the writing community yell at each other, but I've also seen it come together and fight to get more stories heard from vulnerable communities. It makes me proud to be part of that, even if all I'm doing is finding stories that I like and then publishing them.

NOAF: Thank you so much for this behind the scenes look at GigaNotoSaurus!