Superman & Lois knows what we like, so it sticks to what works

By this point, TV producers have refined the formula for Superman: soap opera plus action 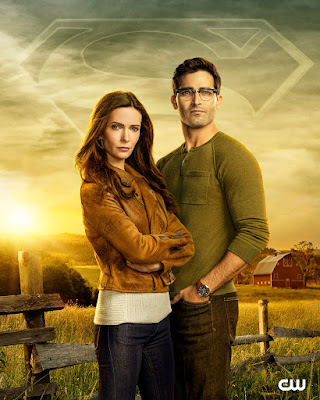 With minimal tweaking, Superman & Lois could be read as an immediate sequel to the deliciously cheesy Lois & Clark that ran from 1993 to 1997. That earlier show ended abruptly with the super couple already settled (after an unbelievable number of attempts at getting married) and ready for parenthood. Most of the time it was silly, and quite a few times it was outlandish, but if there's one thing it was always, it was sincere. The 90s TV Superman was a good guy who wanted to do good. And who, incidentally, happened to have laser eyes. That's what every Superman story should be at its core, and Lois & Clark, as convoluted as it got, succeeded on that front.

In the new Superman & Lois, which premiered on February 23, this model of all too placid domestic life gets a series of curveballs: Clark is fired from the Daily Planet, his mother dies of a stroke, the Kent farm falls into financial trouble, and his son gets his own laser eyes. This adds much-needed relatability to a character frequently accused of being too perfect to be interesting. In the first episode, Lois hits the nail of the problem with perfect characters: "No one ever dreams about the problems." Some of us may aspire to be powerful like Superman, but what Superman aspires to is a normal life among us, even if that includes death of loved ones, predatory banks, unemployment and mental health issues.

The narrative appeal of juggling superheroic adventures with human responsibilities is a trick first mastered by Spider-Man, but with time, other writers have learned the lesson. Superman & Lois opens by keeping the focus on the personal, on Clark's life journey. The first few minutes quickly (maybe too quickly) remind us of the parts of the story we know by heart: blown-up Krypton, crash-landed baby, quiet farm life, dead father, Metropolis, Lois. Once that is out of the way, we can proceed to the juicy family drama we came for. Notably, there's no mention of the larger events that, from this show's perspective, just happened in the rest of the Arrowverse, namely the reordering of all planes of existence. In fact, there's not even the smallest acknowledgement of those other stories; at the very least, Superman's cousin Kara should have been at Martha Kent's funeral. Maybe the writers decided we don't need to bother with the other shows for now.

If so, they're not wrong. We can worry about the multiverse in later episodes; there's more than enough happening at home: Clark has decided to move back to his childhood farm, his sons just discovered they're half aliens, his wife is smelling a corporate conspiracy, his ex-girlfriend holds the reins of his financial future, and the locals have strong opinions on these newcome urbanites. Here we have potential for catty gossip and teary melodrama that would make Smallville proud.

The difficulty, as always, lies in making both sides of the story relevant to each other. It's a delicate juggling act to make an indestructible alien care about things like reverse mortgages and media takeovers and social anxiety. This premiere episode had a lot of ground to cover, and jumped a bit less than gracefully between all its topics. A mature Superman returning to his hometown as a family man is a worthy concept, but it remains to be seen how skillfully the series will keep its hold on so many threads. Unlike the rest of the Arrowverse, this entry is not so sustained by the superhuman shenanigans as by the charm of the two lead stars. If the writers understand that, and let them carry the show, it may very well become something great.

(Side note: Am I overanalyzing if I notice a thematic resonance in a hero struggling to maintain a nuclear family while chasing a villain who sabotages nuclear plants? Is that too on the nose on the writers' part? Or am I imagining things?)

From just one episode, any pronouncement would of course be premature, but so far it appears that this version of Superman is cooking an ingenious blend of what worked well in other productions, i.e. the earnest awkwardness of Lois & Clark, the bottomless well of angst of Smallville, the gritty camera work of Man of Steel, and the social relevance of Supergirl. At the center stands what always must: Clark, the good guy who wants to do good. The film division of Warner Brothers should take note. After almost a century of writers, a Superman story can still be interesting if you don't try to fix what's not broken.

Baseline Assessment: 7/10 an enjoyable experience, but not without its flaws.

Penalties: −1 for turning Lois into a talking soapbox instead of letting the plot illustrate the social commentary.

Nerd Coefficient: 7/10 an enjoyable experience, but not without its flaws.