Piranesi is a deceptively simple story that's transcendent at its core. 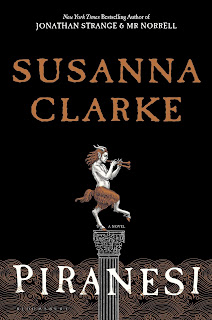 Piranesi is a tremendously imaginative and powerful novel proposing that an ideal home isn’t universally agreed upon. It’s not just predicated on whether the floors should be hardwood or carpeted, but how the dispositions of those around you should be. Or how which preferred culture has molded their general beliefs. Piranesi shows that progress constantly changes how we believe the world must be formed. Oftentimes, progress is a boon, but sometimes it taps into a malicious part of humanity that makes us yearn for before. Nostalgia is rose-colored glasses, tinted with a shade of truth. Susanna Clarke has the ability to delve into this topic with an unprecedented level of depth even though she's writing about a character trapped in a giant house, isolated from Earth, with only one other person to intermittently talk to. It’s a story that strips the hustle and bustle of Earth, and allows the story to develop in an ominously quiet environment.

Piranesi lives in an infinitely expansive house. He’s lived there since he can remember. There are human remains in the house, along with live animals. But the only other living person there is a man he calls The Other, who delivers him goods He's nice enough, but mostly stays apart from Piranesi. Things are going great for Piranesi—he never tires of exploring the house’s myriad halls and statues. But then another live inhabitant is found in the house. And things methodically unravel, leading to major revelations.

I’m not going to dig deep into the characters because much of the suspense of Piranesi is figuring out who the players in the story are. But I will say that they’re written in a unique way that forces a sense of distance because of Piranesi’s structure, yet they feel fully realized despite the confines. And as for Piranesi, he has one of the most zesty, original, and endearing voices I’ve read in some time. Writing the story from his first person perspective was a great choice. His hunger for exploration, and dedication to learning and transcribing about every nook and cranny of the house is infectious. It’s propped up with bubbly language that elevates what could’ve been depicted as a drab environment into a labyrinth that I’d rather read about than even the most exciting Greek mythology.

The novel keeps you guessing by both having things that are what they seem to be in one instance, and the opposite in the next. A character cloaked in foreboding mystery isn’t a good person. A slimily charismatic leader spouting what sounds like lunacy is often telling the truth. Despite not categorically embracing progress, it works hard to be its own original beast, not beholden to tropes of the past. And by showing me that stories still have untrodden avenues available to take, it made me want to march forward, not looking back.

I want to keep this review brief, so I won’t go on about the rich imagery that begs for dozens of literary essays. Instead, I will end with this: a story that progresses the genre forward while simultaneously criticizing aspects of worldly progress is a tough trick to pull off. But having it take place in an expansive house, with limited characters and a narratorial voice that I could’ve read for one-thousand more pages is the best way to do it. Because it strips down all the superfluous elements of our world, and shows that when we are stripped of the flashy but vapid qualities that drain our time, leaving us worse than where we were before, we are left fulfilled. Progress is important to us, in a time when It feels like the world is covered in superfluous thorns. Piranesi encourages its readers to walk forward along a pleasurable path, because the world shouldn’t be covered in thorns in the first place.

Bonuses: +1 For conjuring incredible mystery and tension out of a premise that in theory doesn't sound like it'd have any.