Adri and Sean join the 2021 Subjective Chaos Kind of Awards! Intro and Nominees

Greetings, nerds! Adri here, and I'm delighted to be back with the team at the Subjective Chaos Kind of Awards (SCKA) for another year of blogger award judging! This year, we've assembled a fine jury of bloggers, booktubers and masters of squee, and I've also brought our Sean along for the adventure!

The SCKA are awards (well, kind of awards - there's no ceremony or speeches, but the trophy is a very attractive rock) given out by a group of bloggers each year for works of SFF that catch our attention, especially those that might otherwise fly under the radar of awards consideration. The "chaos" is because we are prone to changing our own rules, even when the awards are going on, not to mention

This year, we've expanded our jury significantly, as well as adding a new category: Best Debut. The 2021 jurors are:

And, of course, Adri and Sean.
For Round 1, we've divided up the categories among the jurors and come up with a shortlist of 5-7 titles for each. Without further ado, let's unveil our selections:
Best Debut Adri's thoughts: This is our new category, and its full of books I'm excited to dig into. Raybearer and Legendborn in particular have both been sitting on my TBR for a few months, so that's where I'll start with the new-to-me titles on here.
Best Fantasy 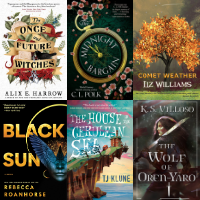 Sean's Thoughts: A mix of heavy hitters and books that have flown a little under the radar. A mix of cozy reads and harrowing ones. Despite the contrast of tones, they all seem like stories with similar high-quality craft.
Best Science Fiction 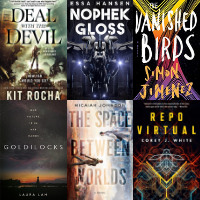 Adri's Thoughts: This is a super intriguing shortlist which crosses multiple subgenres within science fiction, from space opera to cyberpunk to post apocalyptic thriller. The Space Between Worlds is an early favourite for me, but I'm ready to dive into those I haven't read yet.
Best Blurred Boundaries 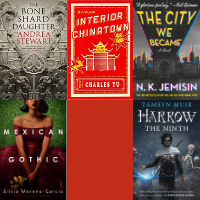 Sean's Thoughts: Probably the list of nominees that most jump out to me. I love when novels take risks and push the boundaries of genre fiction, and from the books on here I’ve read thus far, and the authors I’m familiar with, this is a slam dunk. Picking a winner is going to be tough.
Best Series 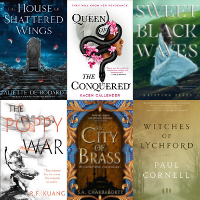 Adri's Thoughts: Ah, series, my dear sweet nemesis category. Judging series last year almost defeated me, but I love getting to grips with the longer arcs represented here, so of course I'm back for more. At least this year, it's full of series that I'm mostly familiar with, although I'm going to have plenty of incentive to finish off some of these trilogies that I haven't got to the end of yet.
Best Novella 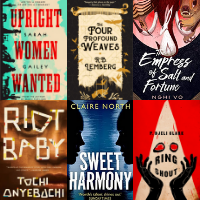 Sean's Thoughts: Novellas are terrific because it allows a writer to potentially tell a story as expansive as a novel, but devoid of fluff. These novellas do just that. Some on this list have a grand scope of worldbuilding. Some dig enormously deep into their characters’ psyche. Either way, it’s a fast but potent gut-punch.
Best Short Fiction
"Tiger Lawyer Gets it Right" by Sarah Gailey (Escape Pod: the Science Fiction Anthology)
"A Convergence in Chorus Architecture" by Dare Segun Falowo (Dominion: An Anthology of Speculative Fiction From Africa and the African Diaspora)
"In Kind" by Kayla Whaley (Vampires Never Get Old: Tales with Fresh Bite)
"Volumes" by Laura Duerr (Cast of Wonders 435)
"You Perfect, Broken Thing" by C. L. Clark (Uncanny Magazine 32)
"Yellow and the Perception of Reality" by Maureen F. McHugh (tor.com)
"Juice Like Wounds" by Seanan McGuire (tor.com)
Adri's Thoughts: No words. Just great stuff. Can't wait!
And that's the list! Check back in June for the results of our first round of judging, where we whittle down our shortlists to two finalists and start reading for the final decision...
Posted by Adri Joy at 12:00:00 AM