A Punk-Inspired Underground Gem from 1983 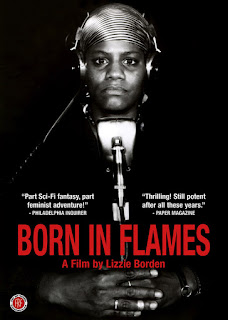 Described by The Village Voice as "a radical-lesbian-feminist sci-fi vérité," Born in Flames might be a little hard to pin in any one genre, but it's a tightly-packed, singular film, produced on a shoestring, with a vision of society that has profound, unfortunate resonance forty years later.

Born in Flames is set ten years after a fictitious socialist revolution swept American politics, but now a decade in, it has become clear that women have been left behind, an afterthought of social progress. The movie follows a number of women: organizers, reporters, editors, and others in their orbit who embrace, or reject, or remain ambivalent about the rising tide of increasingly militant women's activism. Stylistically, it's a brilliant hybrid of scripted scenes, improvisational dialogue, news footage, security camera footage, and just good-old guerilla filmmaking that allows writer/director/editor Lizzie Borden to get a ton of production value on the screen, in service of a story whose scope is one of the broadest I've seen in outsider cinema.

There are difficult parallels in this movie to our current moment, from a bombing at the World Trade Center to the shady in-custody death of a Black woman, which felt like an eerie echo of Sandra Bland, but from thirty-five years in the past. There are definitely moments in this film that are hard to watch, especially when considering that they could be describing events happening right now. But one of the most compelling takeaways from Born in Flames is the idea of intersectionality. This topic is something that we are grappling with daily (just check whatever the trending topics on Twitter are right now), and even ten years before the term was coined, Born in Flames tackled it head-on. There are viewpoints across class, racial, and sexuality divides depicted in the film, and many of the same talking points we hear today that exclude or marginalize different groups of women are pilloried in this movie. Are the attitudes and representations totally in sync with today's norms? No, of course not. But the dialogues taking place on screen remain relevant and thought-provoking.

Very simply, Born in Flames is the kind of movie that reminds me why I love cult movies. I found out about it because the Criterion Channel is doing a retrospective on Afrofuturism, so this is one of those times where I went into a movie with no background, introduced to it because it was included in some retrospective a film preservation group put on, and I walked away with not only an example of astonishing techincal achievement accomplished with negligible resources, but also with a window into an entire worldview and generational movement that I never knew existed. If you had told me before watching this movie that in 1983 there was a collective of intersectional feminists in New York City discussing militarism, exploitation, forced domestic and sexual labor, bridging racial divides, and international solidarity for common cause, I might have said, "I wish I could've seen that." Thanks to Born in Flames, I kinda did.

Baseline Assessment: 6/10. This is low-budget guerilla filmmaking, but inventive use of technology creates a broader canvas than usual.

Bonuses: +1 for the NYC punk vibe of the early 80s, +1 for early appearances from fellow members of the emerging scene such as Kathryn Bigelow and Eric Bogosian, +1 for staying topically relevant for almost 40 years

Penalties: None from me

Cult Film Coefficient: 9/10. I'll be thinking about this one for a while.

Posted by Vance K — cult film reviewer and co-editor of nerds of a feather since 2012.