Microreview [book]: Out Past the Stars by KB Wagers

Winningly brings to an end the second trilogy of novels featuring the green haired gunrunner turned Empress of Indrana. 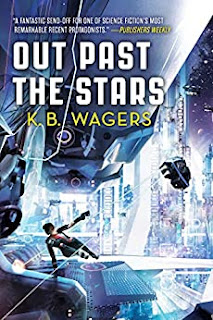 Hailimi Mercedes Jaya Bristol, Empress of Indrana, has been through a lot. From being dragged back from her runaway gunrunner life to the center of seat of power in the first trilogy, and trying to stop a long standing civil and interstellar war in the first two books, including a dark turn with being kidnapped and going to dark psychological places, she has been through the wringer.

Now, here in Out Past the Stars, KB Wagers brings this six book arc to a conclusion, as the interstellar conflict between the Farians, the breakoff splinter Shen, and the mysterious Gods of the Farians comes to a season ending all stops conclusion.

This is in many ways a very different book than the previous book, Down Among the Dead. Reading it in quick succession after the second book might give some emotional whiplash, it certainly is a gear shift. It’s much more like the first book of the Farian War trilogy, There Before the Chaos, in the sense that it builds up to a big set piece finale of a conflict. Unlike that first book, though, this book is much more about the action beats.

This shows the range and power of the author across the three books, and sets them apart from the first trilogy as well, which is more adrenaline filled. This trilogy features a political thriller and maneuvering, followed by a deep psychological dark dive, and now followed by more action beats and revelations and explosive action. Through it all, Hail remains a compelling and strong central character with multiple facets, strengths, weaknesses and the center of a social web. While the original conception of her, back in the first trilogy was billing her as a gunrunner version of Princess Leia, she is far more complicated and envisioned than that. She shows strength, decisiveness, vulnerability, doubt, determination, mercy, and more, and that is just in this last capstone novel. It is as if Wagers is trying to have the final word on her Empress (say it isn’t so!) in this last book.

But for all of the intriguing plot, revelations and worldbuilding we get (and I see echoes and intimations of a bunch of SF in her expansive ideas, ranging from, yes Star Wars, all the way through Babylon 5, Stargate SG-1 and beyond), for me the strength of these novels, and the strength of this novel, the real strength is not the pulse pounding action that makes you turn the pages. It’s not the rich worlds and locations that you want to visit again and again. It’s not the sharp and well honed writing, now, six novels in, really showing the power of the author’s craft. All of that is excellent and could each individually be a reason to pick up this volume, pick up this trilogy, pick up this entire series.

No, for me, where this set of books, where this trilogy and where Out Past the Stars shines and what I read these books for, first and most of all, is the characters, their relationships and how those relationships are shown, grow and change. Relationships in Wagers’ verse are dynamic, growing, changing things, showing central cores of roots and stems, and still, surprising and flowering and taking new directions.

For Hail herself, the center, the Star of Indrana, a quote from Kate Elliott’s Unconquerable Sun comes to mind: “There is but one true sun, and each of us casts nothing more than her reflected glory". This is not to say that the other characters are not compelling, with arcs and stories and developments of their own, but she IS the center, and her relationships which burn the brightest and get the most play. The trust she has in her Ekam, her bodyguard, Emmory. The long distance communications and chats with her designated heir, Alice, who, like most of the rest of the Empire, is not happy their Empress is off dealing with the Farian War problem rather than administering the Empire. The wonderful relationship she has with her sworn brother Hao which hit a peak in the second book, and here we see the implications of Hao's vow in how he now treats his "little sister".

But it is her relationship with the Shen Mia, that has developed over the three books and comes to full fruition here in this third and final novel. There is definitely a strand of full on queer romance here for Hail and Mia.  I don’t think its a spoiler too much to say that there is an HEA here, but does the relationship and the characters themselves go through a hell of a lot to get to that HEA? You bet they do.

Wagers makes sure the both of them get the Happy ending only after a lot of doubt, uncertainty and danger. There is a lot that they go through, both outside of their relationship and inside of it, before they get to that personal happy ending, and the SF beats and the social and romantic and emotional beats line up. It stands in stark contrast to the space opera of ages past, where relationships took a very distant backseat, if they were ever even in the car, with the worldbuilding and action sequences of the novel. Here, they are harnessed in twain, and Wagers knows when to push one and when to push another, but they really are all parts of the same engine. Is this a kissing book? Yes, yes it is. Is it also a book where Hail goes toe to toe with putative Gods with the fate of species and worlds on the line? Yes, yes it is.

And that gets me to a more plot and theme and tone commentary on the book. For all that the novel seems to want to set up the situation as absolutely hopeless (Hail versus an alien species that might as well *be* Gods?) , the novel and its tone are in the end optimistic and positive. Individual action matters, what people choose and the decisions they make do make a positive difference. Parts of the world may be broken, bad things may occur, horrors may strike, the galaxy may threaten to go to devastation and destruction (some of the visions that Hail gets in the course of the novel are truly chilling) but it is action and standing up and standing firm that will get the characters, the Empire, the universe through it all. To take up arms against a sea of troubles and so doing, end them. It's a positivist message, and one surely and sorely welcome in this day and age.

Wagers sticks the landing with Out Past the Stars and while Hail’s story seems complete at this stage, it has been quite the journey for a former princess turned gunrunner turned Empress turned galactic heroine. Wagers is doing slightly different and interesting things with their Neo-G series, but I maintain that if you want to try the author’s work, starting with Behind the Throne and getting to meet Hail and company, first, still stands as the best way to then start buying the rest of their work, through this book and to Neo-G. And, one hopes, out past those stars, too.

Bonuses: +1 for a complete package of a book that has emotional, social, political and action beats in equal measure

+1 for sticking the landing on a second trilogy that satisfactorily brings Hail’s story to a conclusion.

Penalties: -1 for a bit of gear shifting needed for readers.

Posted by: Paul Weimer. Ubiquitous in Shadow, but I’m just this guy, you know? @princejvstin.