A sci-fi adventure with keen emotional intelligence and propulsive momentum. 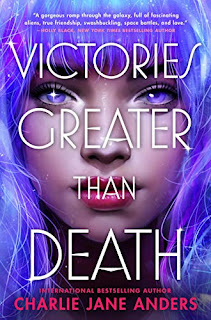 Tina was born a clone of a famed, deceased alien commander, but in human form. She's put on Earth to be raised and hidden until she comes of age to return to her ship and go on grand intergalactic adventures. And early on in the story, she does just that, along with her best friend Rachel, and other humans and aliens. But space isn’t a world free of conflict. A humanoid alien named Marrant is out there, with a sinister plot that threatens Tina. Dazzling battles, grand worlbuilding, and varied character dynamics ensue.

Gender identity is varied amidst a wide range of humans and aliens in this story. Preferred pronouns are openly expressed without derision. The few who are unaccustomed to it, don’t fight back in malice, but come to accept it. Touching someone is something that’s asked for. Sexual identity is fluid without societal pushback. Victories Greater Than Death understands that spaces of civility shouldn’t be areas isolated from a precarious world but should be expanded to encompass the universe’s entirety. It’s a prospect that seems impossible in the incendiary landscape that we live in, but fiction like this is important because not only is it entertaining escapism, but along the way it offers a roadmap to empathy.

This novel packs a lot in it. Its pacing zooms through the story. Mostly it’s with entertaining verve, but sometimes it charges through so quickly that its intentions are blurred and truncated. There are a lot of characters in here, and not all of them are given adequate development. A foundation is set for them all, but every so often, their baggage and conflicts aren’t fully dealt with. Tina and her best friend Rachael are exceptions. Whether it’s Rachael and Tina finding a found family, Rachael dealing with her social limitations, or Tina coming to terms with her fate not jibing with her ideals, everything is excellently explored.

And that impeccable exploration extends to its worldbuilding. I lost count of how many creatively drawn aliens were described, with Charlie Jane Anders writing out enough for you to be fascinated by their unique biology and/or upbringing, without devolving into infodumps. Sometimes the story’s fascination with creative worldbuilding overshadows its characterization, but other times the creativity ties in with the characters, developing a sort of springboard for them to grow.

Like everything else Charlie Jane Anders has written, Victories Greater Than Death is well-written. What could be a convoluted story is charged with clear writing, that never loses focus. But this is the first time some of her lines came off as cheesy and cliched for me. I don’t want to say, “because it’s YA”—since some of the most mature, rewarding novels have been categorized as young adult literature. But I can’t escape the feeling that in targeting a younger audience, the novel overcalculated in simplifying itself.

Nevertheless, this is mostly the story I was hoping for. It was empathetically gentle, while having exciting battles. If you’re looking for a 2021 novel that epitomizes fun, I can’t think of a better choice. Escapism is crucial in times like these—a bit of joy amidst madness. But not only will Victories Greater Than Death heal your soul, it might just grow your heart a few sizes, too

Bonuses: +1 For never being boring.

+1 For some excellent instances of characterization

Negatives: -1 For other underwhelming instances of characterization.