A story that travels through land, sea, and space, evoking awe wherever it goes. 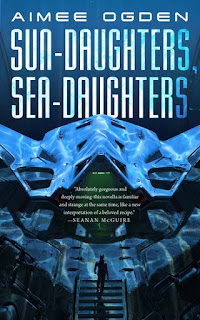 Space is often venerated in science fiction as an expanse full of many possibilities. Sun-Daughters, Sea-Daughters affirms that idea, but also proposes in some cases, the best possibility lies in being grounded where you are. There are still some boundaries that need to be crossed to attain happiness, but those boundaries lie in your identity and immediate proximity. You can cross from sea to land, change your genetic makeup to align with something else on your planet, or switch romantic partners, without being disoriented in dark, interstellar infinity. This is a novella that reaches for the stars, showing its impressive luminosity, while having its legs comfortably on the ground.

Atuale used to be a sea-dwelling person, and the daughter of a Sea-Clan lord. But she chose to change her genetic make-up and migrate to land, marrying a land dweller named Sareeval. Now a plague has wracked her husband and clan. She must go on a quest for a cure, along with her ex-lover Yanja, for help. Together, Atuale and Yanja explore the planets and the stars, with a lot of emotional baggage between the two of them.

The story doesn’t waste your time. It moves at a skillful pace, quickly laying its foundation, and then moves steadily as it satisfyingly plants information about its world while never feeling like it loses direction or rushes through things. However, I would’ve loved further information on Atuale and Sareeval’s partnership. Since the story starts off with Sareeval being incapacitated, we don’t get juicy interactions from the two of them, and are instead told - rather than shown - by Atuale of how strong their bond is, making Sareeval feel more like an object of affection than an entity of affection.

On the other hand, the relationship between Atuale and Yanja is rewardingly plotted out. Every interaction is threaded with a rich history of which Aimee Ogden gives just enough away to make it satisfying. It’s a relationship interlaced with wistfulness, heartbreak, and moments of camaraderie that add spice and an additional layer to the action. Despite the thrillingly frenetic pace of some later scenes in space, it’s grounded in the longstanding planetary bonds, whether it be relationships of the people therein or the planet itself.

Apart from the aforementioned pacing, and passage after passage of beautiful writing, the worldbuilding is especially commendable. Ogden manages to set up not just a believable planet, but a believable universe in one story. Different planets are mentioned, and through minor descriptions are richly drawn. The same goes for the different species. The novella has a wide foundation, while simultaneously begging for further exploration in other stories. Not because it feels empty like a dried up well, but because it’s overflowing with the most appetizing flood of plot.

Sun Daughters, Sea Daughters does take some story cues from The Little Mermaid, but it not only deviates from typical fairy tale retellings, but sometimes transcends them.  And that’s fitting because like a good retelling it both crosses boundaries and reconstructs the ones we’re confined in. We can look up at the stars for an escape, or we can gaze at the horizon, looking forward to how we’re going to better our lives here. There is no wrong method. The novella put me through the ringer, as I held my breath as if I was underwater. When it was over, I felt like I was on land, blessedly regaining my breath, while looking down, slightly missing the floatiness of the water. I hope Ogden has more stories in this world, because I can’t wait to dive back in.

Bonuses: +1 For some of the most impressively economical worldbuilding I've read in a while.