Microreview [book]: One Day All of This Will be Yours by Adrian Tchaikovsky

The man at the end of Time has a problem. 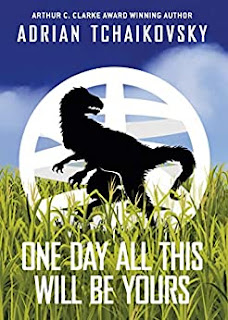 Well, he has a good life, anyway for all that he has that problem.  A beautiful farm, lovely weather, solitude, peace, a pet Allosaur named Miffly. He’s the survivor of the Casualty Wars, wars across time and space in the grand old tradition going back to Jack Williamson's The Legion of Time. Sure, he has to deal with any time travelers who make it to his era, to avoid more problems with casualty and time travel, but he’s a veteran, a survivor, a hero, even and can deal with anyone who shows up with a new method of time travel, and then for good measure, keep that society from making more time travel by changing that fragment of history.

It is when people from the future, a future which should not exist, come back and call him the founder of their new civilization that there is real trouble. And when Zoe, the woman who is supposedly going to be the Eve to his Adam shows up, that’s when things get *real* interesting.

This is the story of Adrian Tchaikovsky’s novella One Day All of This Will be Yours.

Time travel is as old as H G Wells (and there is lovely leitmotif to his time machine) and Time Travel Wars as mentioned above go to Jack Williamson. And guarding time is something that Marvel comics has done with Kang turned Immortus. So the ideas that are on display here are not new, but Tchaikovsky puts his own spin and speculations on the premise of how a Time War would look, and most importantly for the point of the novella, how would someone “win” such a Time War, and what would happen afterwards.

My additional  touchstones for this story, although the novella is very different in tone and style, are Isaac Asimov’s The End of Eternity, and Amal El-Mohtar and Max Gladstone’s This is How You Lose the Time War. This novella is, spoiler, very much not a romance in the same nature as the Gladstone and El-Mohtar novella is, our protagonists here are very different people, but the novella has the same sort of breezy look at history that their story has.

One thing I had hoped for in This is How You Lose the Time War, despite its near perfection, was a bit more historical changes and bits. We get them here in Tchaikovsky’s novella in spades, from time traveling Greeks to a scrimmage of battle involving a bunch of famous historical figures. The novel is light and playful with how it treats history and it is fun for doing so. The author has had a lot of fun mining the entirety of human history for this story and it shows. And like that work, our protagonist and Zoe wind up having a most interesting sort of relationship, although definitely not a romance by any means.

And yet, for the lightness of tone, its frothiness and its turn the page ability in how breezy it is, the novella shares with The End of Eternity a seriousness about our protagonist’s history and goals. Our protagonist is never given a name in the entire work (his descendants calling him Grandfather is the only thing we get) . He doesn’t need a name after all, why does the man at the end of time (or so he thought) need a name? And there is a logic, a sensibility, an ethos to his mission just as much as there is in Asimov's work. To preserve time and space itself, he can’t let anyone past, let the whole thing start up again. It’s a self appointed mission but it is one that makes more than a little sense once we learn more about the protagonist. What seems frothy and light gets darker and much more serious when we realize the scope and reasons for his self appointed mission. Much like The Eternals in The End of Eternity, it’s a thankless task and it's arguable he has the right idea, but it makes sense. It’s a consistent philosophy and its not an entirely pleasant one.

And man, has our Protagonist seen and done things. That shift in tone is never full on grimdark and grim, but the opening lightness does shift more grey and dark once things really get going and we get the full story of what the protagonist does, has done and would do if pushed. The way that time has fractured and is fractured reminds me of the Richard Garfinkle novel All of an Instant.

Still, the novella remains fun even at the end. There are plenty of references, allusions and even a tuckerization of the work of another prominent British SF author. It may not have the poetry of Time War and its a shorter and faster read than The End of Eternity, but it’s a more than fair look at casualty and time travel. The ending is the only one that makes sense, and given the knowledge we get, it's the one that has been set up for us by the rules that the author has set up.

But as fun as Miffly the Allosaur is...what the story really needs, given that it IS a time travel story, and that the author is partial to paleontology, is more dinosaurs. (Although the hyaenodons that show up are nasty pieces of work, Cenozoic Mammals don’t get enough credit or use for being how badass they are)

Bonuses: +1 for fascinating take on time travel and time wars

+1 for a humorously droll main character

Reference: Tchaikovsky,  Adrian. One Day All This Will Be Yours [Solaris, 2021]