Bad Idea Comics is the brainchild of former Valiant CEO Dinesh Shamdasani and despite the ominous name, I am quite excited to check out the books that are scheduled to drop in 2021.  That is, if I am able to pick any of them up.  The premise of Bad Idea Comics is to produce limited comic books that are only available at select brick and mortar retailers.   Unfortunately there aren't any locations in my hometown, but a lot of stores will ship and I plan on preordering the books at some point in the near future.  To find out where you can find the lucky stores that will carry these comics you can click here. 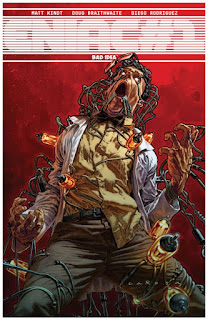 I previously wrote about Bad Idea's plan on getting fans to click a button at www.servethebutton.com and wouldn't release their first comic until it was clicked one billion times.  To add further confusion to what Bad Idea's plan is, they secretly mailed an ashcan called The Hero Trade to their retailers with no hint that it was from Bad Idea.  Some stores tossed their copies, while others sold them on eBay once the cat was out of the bag for a tidy sum.  The button reached 1 billion clicks earlier this week and the hype of Bad Idea's first year of comics was soon to follow.

Bad Idea will deliver five books in 2021, starting with Eniac by Matt Kindt and Doug Braithwaite.  In addition, they are releasing Whalesville by Kindt and Adam Pollina, Tankers by Robert Venditti and Juan Jose Ryp, The Lot by Marguerite Bennett and Renato Guedes, and Slay Bells by Zeb Wells and David Lafuente.

I am always interested in reading any title from Kindt and the two that he is releasing with Bad Idea are extremely intriguing. Eniac is about a super computer that controlled global affairs by pitting countries against one another, but now it has to be stopped. His other title, Whalesville, is about a community that exists inside of a whale. This is discovered after a captain's son is eaten by a whale.  The other title that is a must read, in my opinion, is Slay Bells.  Santa is seeking revenge after a father and son kill Rudolph and try to cover it up.  The preview looks hilarious.

It remains to see if this will ultimately be a Bad Idea, but Dinesh has certainly captured my attention and I can't wait to try and secure copies of all of these books.