Cemetery Boys tells an otherworldly story with a skill that feels equally out of this world. 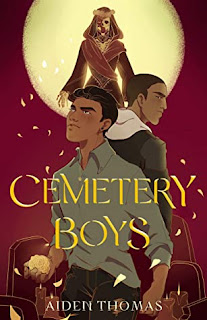 Aiden Thomas’ Cemetery Boys has a slew of elements hiding in plain sight to the characters. A deep undercurrent of love flows between the main characters, as they consciously evade what should be obvious to each other during a significant chunk of the novel, until the romantic epiphany hits them with the subtlety of a truck. Ghosts are invisible to those not part of the brujx lineage (magic-possessing people who can commune and interact with the dead). And the main character Yadriel, a trans man, is dismissed by his family as being unable to deal with the brujx responsibilities because of prejudiced assumptions of his gender identity. Cemetery Boys shows that in all cases, with a little more perspicuity and focus, you can broaden your worldview, and see how you were blinded under a shroud of dazed ignorance.

Cemetery Boys follows Yadriel, a brujx trans man who isn’t persecuted violently by his father, but is persecuted non-violently and dismissed as a lost cause, because they believe only those who subscribe to a gender essentialist ideology can possess magical traits. Often by his side is his best friend, Maritza, a brujx who doesn’t often use magic because she’s a vegan, and magic is typically done with animal blood. Things quickly take a turn, when Yadriel senses the death of his cousin Miguel. On his search to find the body, he summons the spirit of a rowdy schoolmate named Julian who doesn’t know how he died. An investigation ensues to find out who’s responsible for the recent deaths. And the most electrifying romance I’ve read in some time blooms along the way.

That romance is expertly paced in the way it grows believably and is interwoven with the investigation. Sometimes novels have a dissonance between propelling the grander plot forward and developing a romance that turns your heart into swooning mush. But Aiden Thomas always has the grand events and themes bounce off the romance and vice versa. This is additionally extraordinary considering Cemetery Boys also covers Yadriel’s family saga with a family tree that is essentially big enough to envelop an entire city. There are only a couple instances when the novel stumbles in a morass of inaction, and that’s when events in the middle happen multiple times with slight alterations. The slightness of those changes is so minute that reading them feels like you’re eating the same meal thrice in the same day--a good meal, though with diminishing returns.

The novel tackles trans identity, acknowledging that transphobic prejudice still exists--but the book's optimistic of how many minds are capable of change and compassion. It’s unflinching realism with a dash of hope. Apart from a few ignoramuses, most of the prejudice is in the margins, away from the characters and their colorful adventure. There’s a heartwarming amount of love. Yadriel’s love interest has all the qualities of an archetypal transphobe: he’s initially painted as a classic bad boy—but there’s more to him than that. And that’s the sort of perceptual realignment that some characters in the novel have to make about Yadriel, unscrewing their ingrained transphobia. The ghosts aren’t the only characters in the novel who aren’t often seen properly.

The story is steeped in Latinx culture, and Aiden Thomas describes its mythology in an exciting and readable fashion. In fact, the entirety of the novel is written in a way that straddles the line between overwritten and choppy. There are lush descriptions that never descend into purple prose, nor are elements rushed. In terms of debut novels, the writing is otherworldly—a skill of such high quality that it's hard to grasp, like a wisp or ghost.

Cemetery Boys is infused with authenticity, thrills, and insight, until the feverish climax with a reveal that’s wispily hiding in plain sight. By the time the reader gets there, they might be unsurprised, not because the reveal is overly telegraphed, but because the novel expertly trains its readers to not take things at face value and to dig a little deeper. Something that felt like a gust wind shouldn’t be unequivocally assumed as a gust of wind—it might be a ghost. Someone who puts up a wall of unsociability might have their guard up because they’re scared that they will feel more than anybody else. The book is a rallying to know a person more personally than with a superficial glance. But one thing was eminently clear to me by just reading Cemetery Boy’s first page: this book is really good. And in that case, my assumption held up.

Bonuses: +1 For having the romance of the year.

+1 For having an incredibly well-developed supporting cast.

Negatives: -1 There are a couple pacing issues in the middle section of the book.