Corey J White’s Repo Virtual brings a fresh, inclusive and modern spin on Cyberpunk, with the story of a near future heist in South Korea that is far more than it appears 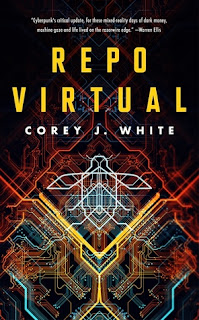 The future city of Neo Songdo in South Korea is a decaying icon in the mid 21st century. Built as being a beacon of the future, a testament to the power of the Zero corporation and as a highlight of 21st century power and strength, it is a city that has strong class divisions, weakened by being a corporate playground that has perhaps seen its better days. Tech is everywhere, and the street finds its own uses for technology, including the Massively Multiplayer Online game of Voidwar. And when a young man who spends his time using the in game currency of the game to get by is recruited into a heist to steal a virus, but it is something far more than he, or others, imagine. Something that could change the world. An Artificial Intelligence.

This is the story of Corey J White’s Repo Virtual.

Repo Virtual hits all of the marks of a Cyberpunk novel, but with a 21st century sensibility. That includes the casting. Among the main characters in the narrative we have a non-binary person, a middle aged corporate troubleshooter, queer protagonists, and people of color. It's a spectrum of representation that early Cyberpunk novels often missed the mark on, and the cast shows the 21st century paint on the Cyberpunk chassis. The mid 21st Century South Korea setting in a corporate town that the characters inhabit feels resonant with prior Cyberpunk locations but definitely feels like a more likely setting, given trends.

Other elements hit the timeless power chords of Cyberpunk square on. The power and reach of corporations - corporations with the power of a government, but with concerns of profit and loss rather than providing basic services - is a theme of 20th century Cyberpunk, and it feels even more resonant now in 2020. A corporate controlled city of endless Minority Report-like ads, where expatriates from the city have set up a community on its edge, trying to escape and build a new life? Robot police dogs? Hacking technology, and technology turned to ends that its creators cannot imagine? Stolen technology that is more than even what it’s creators imagine it is-- not a virus at all, but a nascent artificial intelligence.

So let’s talk about the characters. JD is our entry into the novel, the titular “Repo” who winds up in the center of the heist to steal the “Virus” (which turns out to be the AI). He is a prototypical cyberpunk protagonist in many ways, down and out, looking for the perfect chance to get his knee fixed and maybe some money for his Mom. He is really distinguished by his connections to the other characters-- to Soo-hyun, who recruits him into the plot, to Troy, his lover, and to the AI as well. Soo-hyun’s idealism, which goes through the ringer, makes them an interesting pole, especially as the plot progresses and what seems like a straightforward heist most certainly is not. And then there is Enda. Enda is a middle aged queer woman who corporations like Zero hire to fix problems--such as the theft of a “virus”.. She has a past, a past held over her head like a sword of damocles. She has her technological toys, and skills and a sense of personal loyalty and straight dealing that, if you cross, God help you. In the course of events, she searches for our heist participants, the face of the “opposition”. There are also secondary non-point of view characters, all of them strikingly drawn, especially Kali, whose cult-like leadership of the expatriate community outside Neo Songdo is expressed in interestingly complex terms.

Readers of White’s Voidwitch series (starting with Killing Gravity) know that White hits the action beats and rings those changes well, and he takes those skills and puts them into his mid 21st century story with conflicts and set pieces both small and large. From a tense gun standoff, to a pulse pounding chase across the city, when the author turns on the action, the words just flow off of the page. As you might guess from above, Enda is the heart of these action beats and I have a real affection for her and her ability to use violence in a leveraged and effective way. The novel doesn’t shirk or glamorize the violence, its portrayed excitingly, but not without consequences.

For all of the action, and interesting characters, what really sets this novel apart from most Cyberpunk is its strongly philosophical bent. It sounds more than a little strange to talk about ontology and philosophy in the context of an often pulse pounding SF novel, but White’s novel and its thesis, for lack of a better word, is encapsulated in the sections when the AI starts to swim toward the surface of consciousness, and the debate, and the issues of a new sentient intelligence, and what that means. It is a far less toxic meditation on artificial intelligence, their rights and nature, than in say, the movie Ex Machina, which I kept thinking of as the AI moves from being a pure MacGuffin to being an entity in their own right, with slowly developing hopes and goals of their own. What rights does an AI have? What is the social contract, here? I was not expecting this level of deep thought, as JD and Troy and the AI come to slow understanding, JD and Troy from without, and the AI from within.

And then there is the Epilogue to the novel, once the dust settles. That epilogue, which I will not spoil in any way, since a lot of the power of it is not in the sheer wistful poetry of the worlds, but how it provides the framing for the entire story, is at once very un-Cyberpunk and yet has a perspective that feels so right. It's a testament to the craft and skill of the author.

Does Cyberpunk still have something to say and to present itself as a viable subgenre for the early 21st century for writers and readers? Repo Virtual by Corey J White proves that the answer is, that eye of the needle can be threaded. It’s difficult to write near-future SF, but White not only manages it but succeeds excellently at it.

Find out more about Corey J White and Repo Virtual in Andrea Johnson’s interview with him.

Bonuses: +1 for a diverse group of protagonists and points of view, on various axes
+1 for excellent heist framing and general action beats.
+1 for strong philosophical questions raised, and discussed

Penalties: -1 The  fates of some of the characters feels a little dissonant.