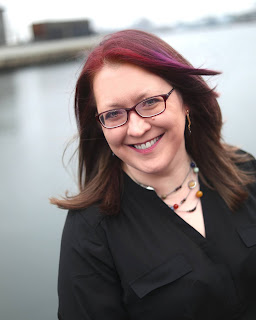 Karen Osborne is a speculative fiction writer and visual storyteller living in Baltimore. She is a graduate of Viable Paradise and the Clarion Writers’ Workshop, and won awards for her news & opinion writing in New York, Florida, and Maryland. Her short fiction appears in Uncanny, Fireside, Escape Pod, Beneath Ceaseless Skies, and more. Architects of Memory is her science fiction debut.

I wish I could write like Ashley Blooms. I would trade my spleen to write like Ashley Blooms. I am currently reading her first novel, Every Bone A Prayer, which is about Misty, a ten-year-old girl living in rural Appalachia. I’ve been eagerly awaiting this one since I read the first chapter when we were both at the Clarion Writers’ Workshop in 2017.

Misty can speak to the crawdads and the birds and the bottles and the trees, but she can’t speak to other people about the terrible things that are happening to her. And she has abilities—strange, magical abilities that help her heal and cope. Blooms vividly paints a picture of how it feels to be confused and ten years old, as well as delineating every blade of grass in a Kentucky holler. There’s a moment towards the end where I cried out of sheer emotion—the closest you get to that old Greek idea of catharsis, where a piece of art makes you feel something real.

And she achieved this on her first time out.

This book is a lyrical brick to the face and a beautiful twist to the gut, and it’s not the kind of novel you read and forget. It’s an important book, the kind that enters the canon. I can’t wait to see what she does next.

I really can’t wait for Valerie Valdes’ Prime Deceptions, the sequel to her wonderful debut, Chilling Effect, because it has everything I love about sharp, snappy space operas, and wow, do we need that kind of thing right now: a smart, messy mouth on a smart, messy heroine, delightful aliens, lots of action, and a crew you root for from beginning to end. Her series hits all of my happy places.

Humans are in the minority in Captain Eva Innocente’s vibrant galaxy, which owes debts to everything from Mass Effect to the glory of the Cuban pastelito (and they are glorious). She’s the kind of character that will risk everything for her family, whether it’s the sister she needs to rescue from a shadowy crime syndicate or the crew that are slowly becoming her family, too. Every chapter is filled with something that made me shriek with delight, and Valdes’ comic timing is perfect, whether it’s a joke or a reference or simply a fleet of psychic cats showing up at the perfect time.

Valdes lands a hat trick that space opera writers rarely achieve: the reverent irreverence of Douglas Adams paired with the expansive world of Dune and the full heart of Star Trek and Mass Effect.

I’ll be on La Sirena Negra for as long as she flies.

I read Sarah Pinsker’s A Song For A New Day when it was released last fall, and I really enjoyed it. It was a story about a pandemic that made it impossible and deadly for people to spend any time together, and how society spun out afterwards. The book focuses on live music, the lives of rocker Luce Cannon and post-pandemic homebody Rosemary Laws, and what happens after they meet.

And then, uh, we had a real pandemic that made it impossible and deadly for people to spend time any together, one that turned live music into a deadly disease vector and, at the time of this writing, continues to disrupt every aspect of the lives we once knew. The author wasn’t trying to be a prophet, but she ended up nailing every single idea: concerts broadcast over Facebook Live and Zoom, online commerce, you name it.

Thankfully, Pinsker isn’t trying to write a hopeless dystopia, here. This is a story set years and years after the pandemic, a story that’s trying to heal the past and set up a new future. It was lovely to watch Luce and Rosemary brave new trails and follow their hearts. It’s going to be quite the experience to read this book again knowing what we now know about how their world began.

I don’t like reading books from my middle school years now that I’m an adult—primarily because I re-read Dragonflight by Anne McCaffrey. Seeing the Pern series with adult eyes changed everything.

See, I was pretty unpopular in middle school, and the bullying started the moment I got on the bus in the morning and didn’t stop until I got home at night. I have vivid memories of looking out the bus window, staring out the window and hoping a golden dragon would whisk me away.

That’s all I understood. “Dragons are cool, and fighting Thread is awesome.” It didn’t connect with me that only men were dragonriders, aside from the unimportant riders of tiny green dragons. I didn’t notice that women were hardly even present. I was too young to understand love beyond holding hands with your crush—let alone the sexual fate of the Weyrwoman. Or the implications of her title—that there’s only one of her.

I know Pern is an influential and important work in the canon, and I appreciate that its author was one of the first woman to be recognized for her work in a male-dominated fandom. I don’t want to take away any of that.

But I do think there’s a valid criticism to be made of a world that relegates women to be drudges and bedwarmers and unimportant green riders. And once I recognized that as an adult, I knew I couldn’t go back.

The dragons weren’t coming for me. They never were. And that made me incredibly sad.

My reaction to Pern is why I won’t read Brian Jacques’ Redwall again. It’s just too precious to me.

This was the early nineties, so while young adult books were being written they weren’t quite their own category yet, unless you were into Sweet Valley High, which I definitely wasn’t. So maybe that’s why I glommed onto these books in-between Heinlein and Donaldson and the other tough adult books the librarians were handing me because I was interested in Star Trek. (Donaldson. Really, librarians?)

Redwall was influential because in those years I felt small and worthless and undervalued because I was bullied at school, and Jacques’ tales were all about tiny mice devoted to peaceful lives that nevertheless would defend their friends and compatriots if threatened—and win. There are prophecies and rhymes and long descriptions of delicious food, and fearful woodland creatures getting over those fears all over the place.

I didn’t see the same problematic issues of Jacques categorizing moral alignment by species/race as I do now, and I stopped reading the series about five books before I’m afraid to go back and read them as an adult lest the magic evaporate.

But wow. A mouse with a sword. A reminder that even the smallest creatures can be heroes. I give this book to every quiet 11-year-old I can.

A lot of people call their debuts the “book of their heart.” Well, Architects of Memory is more the “book of my incandescent anger” or “the book of my existential frustration.” Indentured salvage pilot Ash Jackson is threading a very thin needle after the alien attack that killed her fiance and ruined the company she hoped to join as a citizen. Ash is sick with a terminal illness, but if her new company finds out, she’ll be tossed out of the program. She won’t qualify for citizenship or the health care that might lead to a cure for her condition. On top of all that, she’ll never see her new love—her ship’s captain—ever again.

So that’s the stressful environment in which Ash is working when she uncovers a strange new alien weapon in some battlefield wreckage—a weapon that every company seems to want and that threatens to turn her into a weapon herself.

I think this might be the kind of book you write as an older millennial raised on Star Trek and glasnost and the fall of the Berlin Wall, who was told her entire life that things are looking up, only to be clobbered with war and recession and more recession and more war and now this end-stage capitalistic gig-working hell. I don’t think it was a coincidence that I started writing this book while also attempting to make rent money on a gig platform that required me to pay actual money for the chance to work.

Add in a slice of my own dealings with chronic health issues and a crew that’s been waiting for a story since the turn of the century (since I thought them up in a boring college class, that is), and you have a novel that tries to be hopeful while dealing with things like corporate greed and betrayal and some other surprising things. I’m really proud of Architects of Memory, and I hope readers like it as much as I do.

---
POSTED BY: Paul Weimer. Ubiquitous in Shadow, but I’m just this guy, you know?@princejvstin.