Over the past month, I've found myself struggling to get much reading done again, as the various stresses of trying to live through Interesting Times have continued to take their toll. However, what I have found this month is that short fiction has come into its own for me: even when I'm not able to get myself motivated to read a novel, I've been able to pick up a story or two and my magazine folder is looking much healthier for it (on the other hand, let's not talk about my ARC folder...). It's not where I wanted to be at with my reading at this point in the year, but I'll take what I can get these days. So, let's see what's been on the menu this month:

I read the last three months of Giganotosaurus stories this month, all of which were excellent if very different in tone and outlook. "Miss Bulletproof Comes out of Retirement" by Louis Evans (August 2020) is an intriguingly meaty deity-superhero type setting with a main character taking on One Last Job which brings her into a conspiracy of the kind she's no longer as prepared to deal with as she used to; the worldbuilding here is first rate as are the relationships between the main characters. "The Pandora", by Stephanie Charette (July 2020), is unpleasant and claustrophobic, dealing with a girl who has been taken in by an abusive older man to shape her into a "perfect wife". Stripped of everything up to and including her own name, "Portia" (Jane) finds a lifeline in a doll which turns out to be sentient and able to enact a body swap, leaving Jane safe inside the Pandora's body while the Pandora withstands the various punishments and trials she is subjected to. The creepy doll trope is cleverly deployed here, leaving us, like Jane, uncertain about the Pandora's motives and unable to decide where to place our trust.

Then there's September's story, "A Wild Divinity" by Rebecca Schneider. This is the tale of Nassa, a woman who is dedicated to the god of reason, until he starts turning up in unexpected places and trying to impregnate her. She ends up taking refuge in the temple of the god most opposed to hers: the Queen of Delight. Initially worried and uncertain about her new situation, Nassa starts to appreciate this new divinity and particularly to forge a bond with Eidel, one of the devotees of Delight. Beautifully paced and set in a world that feels like it could support a whole lot more narrative, Nassa's specific journey, with Eidel and with her gods, is a delight from start to finish, giving space to her growth and tying everything together extremely satisfyingly at the conclusion. 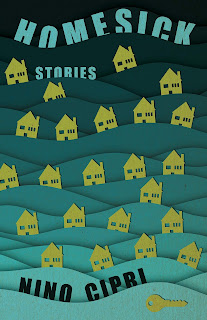 I've been meaning to read more of Nino Cipri's work for a while and this collection, bringing together 9 of their works, did not disappoint. As the title and the gorgeous cover suggest, this is a collection that's very much about homes: having them, leaving them, and what happens when we are set adrift both emotionally and (this is a speculative anthology after all) in the fabric of reality. Insofar as this collection has a centrepiece, it's the outstanding "The Shape of my Name", originally published on the tor.com website. This is the story of a family in possession of a time travelling device, narrated through the perspective of someone navigating a relationship with their mother as they both work through different points in time and the protagonist comes to terms with her trans identity. The way the time travel affects the relationships here is beautifully done and it's a story that weaves its fantasy and mundane elements together to offer a wonderful, heartbreaking experience.

It's difficult to pick other favourites in here: I enjoyed the novelty of "Which Super Little Dead Girl(TM) Are You", told in the form of a multiple choice quiz about a fictional doll franchise with exactly the premise you'd think; I also highly enjoyed "Not an Ocean but the Sea", and the weird, minor hauntings of "Presque Vue", whose protagonist keeps pulling keys out of their throat and is otherwise trying to live as normal a life as possible around that, as those around him deal with haunting circumstances of their own. All in all, though, this is one of those collections that just works as a whole, and I definitely recommend picking it up to appreciate Cipri's brilliance in this form. 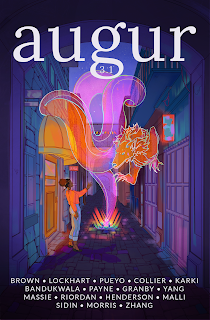 This is my first issue of Augur! And its an interesting, if rather grim place to start: this is an issue themed around "grief, giving and gateways". There are a ton of great poems, stories and even a cute comic, and all in all it was well worth overcoming my usual aversions to PDF for. The issue opens with "Prism" by S.D. Brown, which really sets the tone for what's to come: this is the story of a woman who has a child in prison who is taken away from her, and her attempts to take herself out of her grim reality and find ways to seek him out in the outside world. The horrors of the protagonist's treatment in prison, and the heartbreakingly small glimpses she gets of her son as he grows up under the care of another family, make for a grim but effective exploration of the brutality of the prison system and the racism inherent in the system. One to read the content warnings for, but very effective. Similarly affecting for me was "What Lies Within" by Isha Karki, the story of Swarna, a migrant woman married to a man from another country, who misses the chickpeas cooked by her mother in a way that seems linked to her inability to sleep in her new home. The "princess and the pea" overtones are evident, but this is no story of sensitive royalty and Swarna's experiences are of abuse, forced assimilation and mistreatment at the hands of the doctor brought in to treat her, all leading up to a sudden, devastating ending which feels deeply fitting even as it pulls the rug from under the reader.

My other favourite from this issue was "She Lies an Island", by Michelle Payne. In it, woman who returns to Ireland to see the body of a slain giant which has become a tourist attraction; she is going on the journey for her grandmother, who claims to have met a giant in her own youth. The story juxtaposes the tragedy of the giant's story and the protagonist's grief around her grandmother with an excruciatingly good representation of a sordid tourist experience. From the sleazy tour guide who ended up being the protagonist's uncharacteristic one-night stand from the previous evening, to the awkward behaviour of the other members of the tour group, to the awful activities organised for them when they get to the giant (the done thing is to take a bow and arrow and shoot at its face), it's evocative in a way that only enhances the inherent beauty and mystery of the dead giant herself. In a way, the ending (and yes, this is another grim one) comes as a release, a point of escape from the utterly cringey, miserable situation of the characters even as it ends in total disaster for almost everyone involved. The giant gets a fitting ending, though, and that's sort of all that matters. 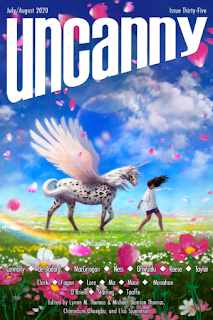 I'm behind with my Uncanny reading - in fact, it's possible my subscription has lapsed without me noticing, because those are the kind of times we live in now, folks - and some of the stories in this next-most-recent (I think?) issue worked better for me than others. Firmly on the "yay" side of that equation was "The Inaccessibility of Heaven" by Aliette de Bodard, a story of fallen angels and the humans who live alongside them (I'm not sure if this is in the same universe as The Dominion of the Fallen, though it definitely doesn't feel the same or contain any characters I recognise). It's a tight, intriguing murder mystery that puts its human protagonist in the centre of magical happenings which the Fallen in their life would prefer they stayed out of. Also fun was "The Ruby of the Summer King" by Mari Ness, a fable about the titular character trying to woo the Winter Queen and getting himself, and the entire seasonal realm, into a bit of a pickle over the whole thing. It's a story that takes fairly well-worn tropes and makes something that feels fairly timeless, but which nevertheless had me feeling that I genuinely didn't know how everything was going to turn out. And then there's "A Pale Horse" by M. Evan MacGriogair, which makes up for the sin of having my least favourite story ending line (please, please, stop telling me how much work the characters have to do as you close out your stories, I'm begging you, it drives me up the wall): a story whose plot hasn't stayed with me, but whose evocative sense of place and culture on the West Coast of Scotland, the relationships it forges between its characters, including a protagonist who is seeking belonging across different communities and languages, and the overall sense of an overwhelmed, dying near-future world which nevertheless is full of hope, all adds up to an excellent experience.